the all-German side of the semifinal bracket, Aaron Brackmann faced off against Christian Huttenberger in order to determine who will be facing a Japanese drafter in the finals. 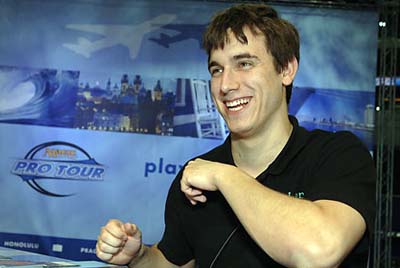 Christian Huttenberger was in the semifinals of his first Pro Tour.

Christian won the die roll, but had to take a mulligan of his opening seven. He looked at his six, and with a slow exhale of breath he declared that he'd "give it a try."

Each player had a slow start, with Christian starting with Plain, Swamp and Mountain, while Aaron had Island, Forest, Mountain. His turn three was a little busier though, with a Coiling Oracle (revealing Ocular Halo) and a Seal of Fire.

The first play from Huttenberger was a Slaughterhouse Bouncer, to which Aaron responded with a Dousing Shaman.

"How many cards in hand?" asked Aaron after the draw.

Christian counted from five to four to three with a land, signet and Faith's Fetters on the Shaman who threatened to Seal of Fire every single turn. Brackmann seemed to have the better of it though, as he tapped out on turn six to play his Gleancrawler. Without plays from Christian, Aaron got to beat down then play a Sporeback Troll before passing.

Slaughterhouse Bouncer got to swing in, and then Christian followed up with a Savage Twister for 6, clearing the board of everything but Sporeback Troll, who regenerated safely.

Aaron had lost his bomb, but still had gas in the form of a Bramble Elemental that took a counter from his Troll. Christian was forced to Pillory of the Sleepless this big threat at the first opportunity, but he did have to give his opponent some tokens in the process. A Dimir House Guard also came down, presumably to stay on defence.

Christian played a Scatter the Seeds at the end of turn in order to get up to five Saprolings on the board, and then attacked with his entire team, taking Christian to 8. An Ocular Halo on Brambles was enough to get the scoop from Huttenberger.

Christian chose to play first, and each player kept for Game 2. The first threat of the game came from Christian in the form of Freewind Equenaut, which was met with one of the three Silhana Starfletchers in Brackmann's deck. The Equenaut would not be getting in just yet. 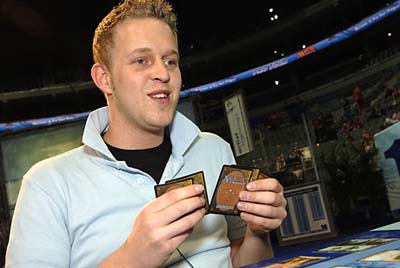 Brackmann had reason to smile after taking an early lead.

Christian followed up with a Stinkweed Imp and passed to Aaron, who had to use his Starfletcher to help power out a Bramble Elemental. He took a flying attack from the Equenaut, before Steamcore Weird shot Stinkweed Imp out of the sky, and allowed for an uncontested attack. Christian dredged it back and played it, only to have it hit by a Seal of Fire, allowing for more beatings.

For a second time, the Stinkweed Imp came back like a bad smell, at the expense of the majority of Christian's sources of red mana. Aaron attacked in, and had a Plaxcaster Frogling to follow up with. After Christian tried for a Faith's Fetters only to have its target made untargetable, he simply conceded while on two life.

"This is too easy!" chided Brackmann as he shuffled up. "Put up a fight!"

For a third time Christian went first, and with a little chuckle he took his second mulligan of the match. A Freewind Equenaut was again the turn-three play for Christian, and it was unsurprisingly met with a Silhana Starfletcher from Brackmann. The Equenaut got to hit once (perhaps signalling that Brackmann really needed the red mana from his archer), and was then followed up by Master of Impediments.

Aaron did use the Starfletcher for mana, but more to accelerate than for the colour, casting a Bramble Elemental on turn four. Christian's response was to start to swarm out, with Tin Street Hooligan and Centaur Safeguard. Aaron had no attacks, but he did have an Ocular Halo for his Brambles, to put two Saprolings into play.

Christian was all about the air assault this game, consistently getting in with Freewind Equenaut, thanks to tapping the Starfletcher, and he looked to build on this with a Shrieking Gargoyle that forced a discard of Dowsing Shaman. Aaron played out a Patagia Viper to get yet more tokens, and a flying blocker. This blocker was hit by a Faith's Fetters to make the life totals 14-23 in Christian's favour, which turned to 10-23 following an attack for four in the air.

In Brackmann's upkeep, Christian used Master of Impediments to tap Silhana Starfletcher, only to have him play a second one, this time naming blue. Aaron then swung for two with two of his tokens and passed.

On his turn, Christian tried to tap the untapped Starfletcher, only to have a Plaxmanta end that plan, and an end-of-turn Scatter the Seeds fill up Brackmann's board.

For his turn, Aaron drew, and played a devastating Electrolyze, killing Master of Impediments and Shrieking Gargoyle. On his turn Christian tried to rebuild with a Mausoleum Turnkey to get back Shrieking Gargoyle and a Thundersong Trumpeter.

Aaron seemed unconcerned by these, attacking with his Bramble Elemental in order to catch up on the damage race that had left him at 10 to his opponent's 21. It got double blocked, but with some help from Wildsize, Aaron did kill both blockers. He then played Coiling Oracle, in effect drawing a card, and passed.

Christian played Pillory of the Sleepless on Silhana Starfletcher, attacked, and remade his Gargoyle. With his Trumpeter, he could again push through damage in the air, and seemed unconcerned with any threats to his ground board, being well ahead on life.

This is something that Aaron looked to change, with a big attack from Plaxmanta, Coiling Oracle and six tokens. Two tokens were blocked and traded with to take Christian to 16, while Aaron was at just seven, before Aaron played a Simic Ragworm and a Dream Leash on Thundersong Trumpeter.

Facing down a very busy board with only two creatures, Huttenberger chose to hold back with his monsters, wary of losing his 16 in one big swing. Five tokens, Plaxmanta, Coiling Oracle and Simic Ragworm came in, dropping Christian to 8, and losing him his Gargoyle, while Aaron lost a Token and Plaxmanta in blocking. Aaron then played Gleancrawler.

In the face of a very busy board, with nothing much on his side, Christian was forced to scoop it up.

Aaron Brackmann wins 3-0 and advances to the finals of Pro Tour-Prague!