It was white-blue everywhere for these two. In the quarterfinals, Ben Stark had to play a near-perfect mirror against his ChannelFireball teammate Tom Martell. Meanwhile, Naoki Nakada was battling Shintaro Ishimura matching decks that skewed the white-blue shell in different directions. Despite their differences, all four decks ran with the weekend's defining cards: Squadron Hawk, Stoneforge Mystic and Sword of Feast and Famine. Testing over the lunch break seemed to have put the advantage on Stark's side, but there were a number of trouble cards in Nakada's deck.

Stark opened with Preordain and didn't care for what he saw, sending both cards to the bottom. They both played out lands until Nakada's third-turn Tumble Magnet. Stark Mana Leaked, and then eagerly untapped to get Jace, the Mind Sculptor into play. He Brainstormed, then passed it back to Nakada. 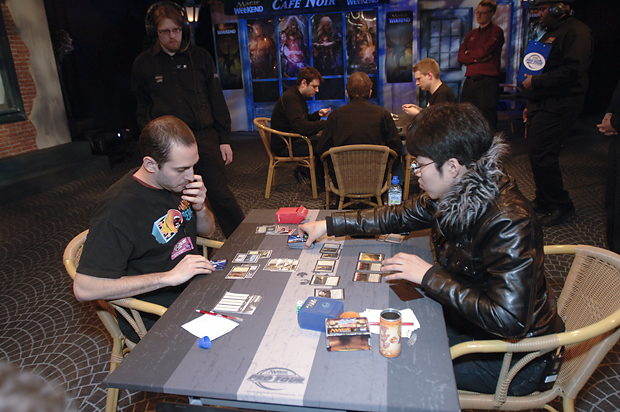 Ben Stark and Naoki Nakada bring different styles of white-blue to the battle to get to the finals.

Nakada played Stoneforge Mystic, fetching Sword of Feast and Famine. He passed with two mana open. Stark untapped and considered his options. He decided on a Stoneforge of his own, getting Sword of Feast and Famine as well. He Brainstormed with Jace, then cast a Squadron Hawk for two more, stuffing his hand and shuffling away the duds. He had a lone Island open, threatening Spell Pierce.

Nakada played his fifth land and frowned. He played Journey to Nowhere on the Squadron Hawk and passed it back to Stark. Stark cast his Sword, and Nakada did not counter. Jace, the Mind Sculptor sent Nakada's Mystic back to his hand. He put his Sword out in response, but had to take a hit from the Sworded Mystic. He pitched Marsh Flats and Stark untapped his lands. He brought out another Hawk, searching up the last one, the Preordained. He passed it back with three mana up. Nakada summoned Squadron Hawk, and Stark frowned. He chose to counter with Stoic Rebuttal. That left Nakada clear to sweep the board with Day of Judgment.

Still, there was the Jace problem. Stark Brainstormed and got a shuffle out of his Squadron Hawk. He played a Tectonic Edge, answering any concerns of Nakada's Celestial Colonnade, and passed the turn. Nakada played a second Tectonic Edge of his own. He did some quick counting, then tried Elspeth Tirel. Stark had Mana Leak. Nakada played out his Stoneforge Mystic and declined to search.

Stark continued to press his advantage with Gideon Jura. He bounced Stoneforge Mystic to hand and hit with his equipped Hawk, getting rid of it. Nakada was firmly in his grip. He held on for a turn, but unable to answer the opposing planeswalkers, he quickly succumbed.

Nakada mulliganed for this game. He had Squadron Hawk on the second turn to undo some of the damage, getting all three others out of his deck. Stark had Stoneforge Mystic and got himself a Sword of Body and Mind. Nakada made a Tumble Magnet, foiling any early equipped beats, and hit for one with his Hawk. Stark played a third land and tapped out for Sword of Feast and Famine. Nakada hit for 1 and cast a second Hawk. 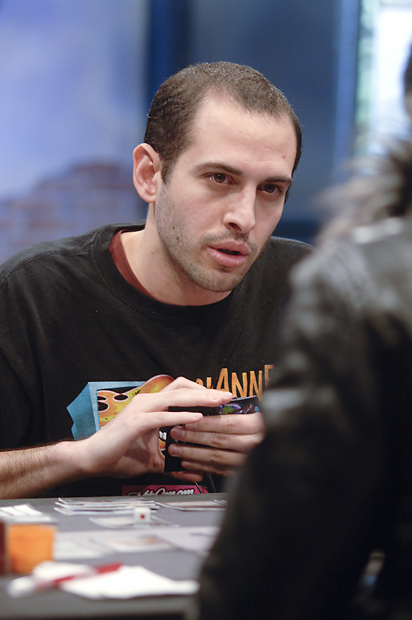 The Stark reality of a PT semifinal.

Nakada hit for 3 in the air, holding back a blocker and stuck on just Edges and a Plains for land. Stark fell to 9 life after using a fetch land. Stark swung in and earned the chump block, then tapped out for Gideon Jura, putting him to eight loyalty. Nakada's blue mana was late to the party. He Preordained, then Edged away Stark's Edge. His Hawks took Gideon to five.

Now Stark's path was clear. He was free to play Jace, the Mind Scuptor, Brainstorm, and then attack and get all his mana back. Nakada discarded a Jace of his own. With his extra mana, Stark played Baneslayer Angel. Nakada had Day of Judgment to get rid of the creatures, but he still had two planeswalkers to deal with. Gideon picked up the Sword and charged in, and Stark played a second Baneslayer Angel. Nakada drew, then packed up his cards.

Nakada opened the third game with Preordain and then Squadron Hawk. stark answered with a Hawk of his own. Nakada Preordained again and offered a Hawk trade. Stark accepted. He summoned a replacement and passed the turn. Stark made another Hawk, and they traded on Nakada's next attack. Nakada's fourth land was Celestial Colonnade, and he played a Hawk. Stark did the exact same thing. They traded.

Finally, Nakada broke the monotony with Stoneforge Mystic. He got Sword of Feast and Famine and played a Hawk for good measure. stark drew for his fifth turn and went deep into the tank. He emerged with a play of the final Hawk and a Tectonic Edge. As expected, Nakada used the Mystic to get his Sword into play, then put it on his Hawk and attacked. Stark blocked and took care of both with Divine Offering. Nakada Tectonic Edged away one of his Colonnades.

Stark Preordained twice, then played a land and passed. Nakada hit for one with his Mystic and played Luminarch Ascension. Stark had no play on his turn. Nakada tried a Jace, but Stark countered with Mana Leak. He hit Stark for 1, who Edged away his Colonnade at end of turn.

Stark untapped and tapped five for Baneslayer Angel. Nakada had Deprive, but Stark had Spell Pierce at the ready. Nakada's Ascension hit two counters, but things were looking grim. He tapped out again for Gideon Jura. Stark animated his Colonnade and knocked Gideon off the table with his two creatures, but that let the Ascension get to three. He played a postcombat Stoneforge Mystic, searching out Sword of Feast and Famine. 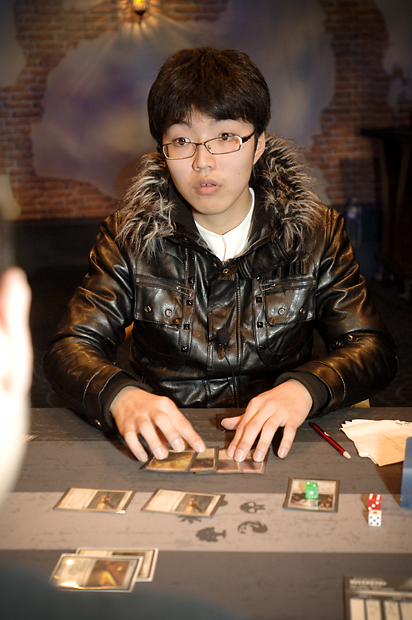 Nakada played Sword of Mind and Body, equipped it, and attacked. Stark was happy to chump block with his Stoneforge Mystic. Stark cast and equipped his Sword, hitting for 7 and getting his lands back. Nakada discarded his last card: Elspeth Tirel. A postcombat Jace, the Mind Sculptor and Brainstorm, and Stark was finished. Arguably, so was Nakada. He attacked and took out Jace, but the Angel was the real problem. Stark hit him low and gave him one more draw step. Nakada slowly flipped it over to reveal ... a land. He offered Stark a handshake and thanked him for a great match.

Ben Stark defeats Naoki Nakada 3-0 and advances to the finals!