Semifinals: Head in the Clouds

Of the three Japanese players playing this morning, only Kotaro Otsuka, who was NOT wearing a feather boa, despite all appearances to the contrary, remained. He was playing Blue-Black Mannequin, standing out against the field of green-black and Dragonstorm. His opponent was Israel’s Uri Peleg, whose green-black deck added white for the deadly Doran, the Siege Tower.

Before the match, Peleg and his teammates were testing sideboarded games. They had devised a strategy that seemed to be working, but only if they were correctly anticipating how Otsuka would board.

Peleg mulliganed his first hand, and then they were off. Otsuka led with Faerie Conclave, and Peleg Thoughtseized him. It couldn’t have been better in a dream: five land and Shadowmage Infiltrator, immediately binned. Peleg followed up with Treetop Village and Llanowar Elves the next turn. Otsuka’s deck tried to rescue him, giving up a second Finkel. Peleg was ready with Eyeblight’s Ending. 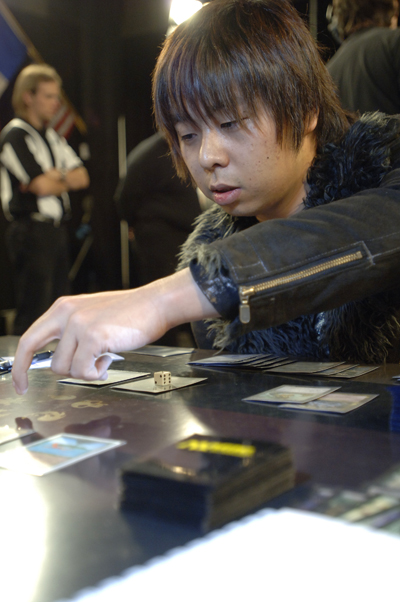 Japan’s Kotaro Otsuka remains calm and collected. He untapped and moved to put it away with Ohran Viper, but fortune hadn’t abandoned Otsuka yet. He had Shriekmaw on hand. One good reversal deserves another, and so Peleg’s Profane Command resurrected his Viper and executed the Shriekmaw. Otsuka returned fire with Damnation straight off the top.

But Peleg’s tank was overflowing with gas. This time it was Doran, using up the last counter on his Gemstone Mine and leaving him without white. This let Cryptic Command’s Repulse effect (off the top, of course) strand it, at least for a little while. Peleg shrugged and played out his Tarmogoyf (a busty 5/6) and Birds of Paradise, threatening the return of the Treefolk beatstick.

What two cards had the Command and draw step given Otsuka? Why, Phyrexian Ironfoot and Epochrasite, of course. The insect blocked the incoming Tarmogoyf. Down came Doran. So naturally Otsuka’s next draw was Shriekmaw for the ‘Goyf. Peleg played Garruk and untapped two.

Otsuka charged with his team. Doran took care of an Ironfoot, and Nameless Inversion took care of Shriekmaw. Mouth of Ronom put Doran to rest.

Did I mention that Peleg had another in reserve? He did. He made a Beast, too.

Epochrasite came into play as a 4/4, so Otsuka needed another good draw. Well, why not the third Shriekmaw? Peleg made another beast. Surely this time Otsuka’s deck would serve him a land.

No sir. Shadowmage Infiltrator. Peleg made another Beast.

Otsuka drew the fourth Shriekmaw. Maybe you’d like to take this moment to tally the topdecks.

Peleg made his last Beast but had a second Garruk Wildspeaker ready. He charged it up for a lethal Overrun and used the extra mana for a Tarmogoyf. Would Otsuka peel again?

Don’t fool yourself, of course he would: Riftwing Cloudskate clearing Doran out so his fear creatures were unblockable. He sent one Shriekmaw at Garruk and the other, along with Shadowmage Infiltrator and Faerie Conclave at Peleg, knocking him to just 5 life. He re-played Doran, but couldn’t block enough of Otsuka’s evasion creatures to survive. And the really astounding thing is, despite that preposterous cavalcade of ill fortune, Peleg didn’t seem rattled at all.

Peleg, on the play, opened with his deck’s trademark brutality: Birds and Doran, the Seige Tower. He followed up with Thoughtseize, seeing a hand of Island, Shriekmaw, Nameless Inversion, Cryptic Command, and two Phyrexian Ironfoots.

He took Cryptic Command. Otsuka untapped and dropped Phyrexian Ironfoot, then took another 5 across the jaw from Doran. Peleg made Llanowar Elves and passed it back. As expected, Otsuka fortified with another Ironfoot. He was stuck on three land, without black thanks to his lazy River of Tears.

Peleg considered his options, then tapped four for Garruk Wildspeaker. He moved him up to four loyalty and passed it back to Otsuka. Otsuka grimly cycled Mind Stone. Peleg added Liliana Vess to the mix (with help from Garruk), and started attacking Otsuka’s hand. Next came Serrated Arrows, allowing Doran and a beast to attack. Nameless Inversion let one Ironfoot dispatch him without consequence. But Peleg knew it was there, so there had to have been some reason.

The reason, it turned out, was Profane Command resurrecting Doran and knocking a concession out of Otsuka.

Otsuka switched things up this game, bringing back in the Cloudskates and Warhammer, and shelving the Phyrexian Ironfoots and two Thoughtseize. He mulliganed down to six, and kept. 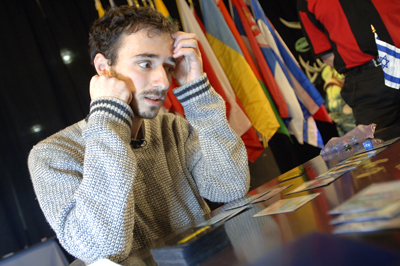 Is it just us, or does Uri Peleg always look worried? Peleg started with Gemstone Mine and Birds of Paradise, and Otsuka wasted no time evoking Shriekmaw to be rid of it. Peleg fired back with Thoughtseize and saw Otsuka’s hand was just Damnation and lands. Would his deck serve up another absurd parade of topdecks?

In the short term, the answer was no. Peleg made Treetop Village, and then Doran while Otsuka worked his Conclave. One damage really didn’t stack up to the big Tree. Peleg played a Stupor that cost Otsuka a land and ineffective Shriekmaw. Peleg animated his village and made it eight a turn.

Otsuka, back against the wall, played Mulldrifter. He threw it under the bus and was left at 4. Next on the chopping block was Faerie Conclave, and after that, there was nothing to protect him.

Nameless Inversion shut down Birds of Paradise and its threat of a second-turn Doran. Peleg was forced to play a second Birds and wait an additional turn. Meanwhile Otsuka played Mind Stone and a Pithing Needle on Garruk Wildspeaker. Down came Doran.

When Otsuka spent his fourth turn animating his Conclave and swinging in for just one it looked like Peleg would be running away with this one. He Stupored Otsuka (who forgot to crack his Mind Stone), and caught Makeshift Mannequin and Pithing Needle. He bashed for six, and Otsuka remembered the Stone and sacrificed it. It wasn’t what he needed.

Fortunately for him, help was waiting on top of his deck: Damnation. He blew up Peleg’s board, and Peleg was forced to pass a turn with nothing to do. Another turn passed, then Otsuka found Mulldrifter, which got Thoughtseize, which caught Peleg holding Oblivion Ring. With only two Garruks in his deck, and not anticipating a Thoughtseize, he hadn’t wanted to use it.

Peleg drew Stupor and cleared out Otsuka’s hand. The Faerie Conclave flew overhead for two. Next up for Peleg was Nath of the Gilt-Leaf, but Otsuka’s two draws were kind, and on his turn he was sending it home with Riftwing Cloudskate and then Thoughtseizing it away. He was down to 9, but now he had an air force.

Peleg drew and passed it back, taking four. His next was an ironic Garruk Wildspeaker, and the fliers took him to eleven. Another attack for four and now Otsuka was gearing up for Game 5, but then Peleg announced an effect on end step.

Otsuka leaned over and double-checked the card, and then his life total. He shook his head and laughed, revealing the Persuasion in hand that had him so confident, then reached across and shook Peleg’s hand in congratulations.

Uri Peleg wins 3-1 and advances to face Patrick Chapin in the Finals.