Semifinals: By Hook or by Crookclaw 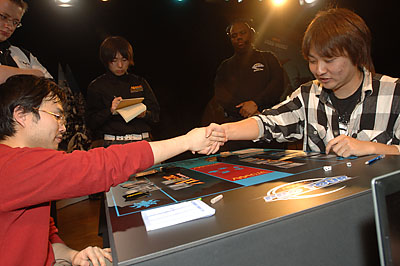 Takuya Osawa and Shingo Kurihara are both eager for a chance at the top.akuya Osawa is poised to do what no Japanese player has done before - win two Limited Pro Tours. He was only the second to win one at all, following Shu Komoro. While he cannot match Nicolai Herzog's back-to-back victories, getting two trophies within 12 months certainly sets him right at the top in terms of recent Limited performances. First, though, he has to beat countryman and team-mate Shingo Kurihara, who dispatched Erwin Tormos in the quarterfinals, and then face either Mike Hron or Kenji Tsumura in the finals.

This road will not be easy. Shingo has a controlling blue/white deck sporting a happy amount of slivers. Takuya, meanwhile, was fortunate enough to pick up a suspend and removal-heavy blue/black deck, whose highlights include three copies of every spelling bee's worst nightmare - Phthisis.

For the first game of the match, on the draw, Takuya Osawa mulliganed twice - not the ideal start. Shingo led with an Island and passed, while Osawa had a turn one suspend on Viscerid Deepwalker.

From here the action was all about Shingo, at least while that homarid took its time to un-suspend. Shingo had Sinew Sliver, Errant Doomsayers and Watcher Sliver on successive turns, which forced Takuya to play his Veiled Oddity straight from hand, rather than suspending it. Early attacks got Takuya down to 15, and as he was unwilling to lose his 2/3 to the 3/5 Watcher Sliver, Osawa dropped to 12 before his Viscerid Deepwalker hit play.

The homarid attacked unchallenged and unpumped, and was soon joined by a Gorgon Recluse, which would have proved a powerful blocker but for the fact that Kurihara had a Temporal Isolation ready for it.

As mentioned above, Osawa's deck sported a full three copies of Phthisis, but it looked that he'd never get enough lands in play to be able to use it, even once. Kurihara played an Ivory Giant and attacked with his slivers. A flashed-out Drudge Reavers got tapped, and Osawa dropped to a precarious 4. He played a morph and passed.

Shingo, meanwhile, was building a formidable board with which to deal the final few points. A Looter il-Kor was swiftly joined by Amrou Seekers, either of whom could prove a touch problematic.

At the end of the turn, Osawa used his morph (a Coral Trickster) to tap down Errant Doomsayers, allowing him full use of all his creatures for his turn. Osawa's only play for that turn though was a morph, with three lands untapped. This morph turned out to be a Coral Trickster too, and Osawa used it to hold off Amrou Seekers for a turn. Shingo had a Synchronous Sliver, and with it onside was ready for a big attack. With his Errant Doomsayers to tap down one blocker, it was enough to elicit the scoop. 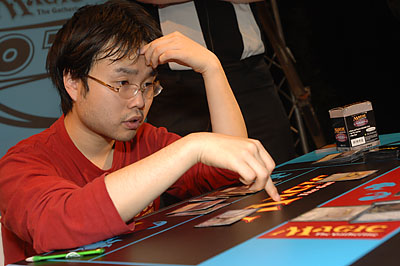 Kurihara thinks it through.

For the second game, on the play, Osawa's hand was a lot stronger, and it was Kurihara's turn to mulligan, though only the once. Takuya started with a Sage of Epityr, and proceeded to plan out his next few turns carefully. The following turn, he had a Prismatic Lens and an attack for one.

Over the following turns the Sage got in for quite a few, while Osawa played a morph and suspended Corpulent Corpse. Shingo was stuck on two islands, and used a snapback to slow down the morph, but was down to just 14 without more on the board than 2 Islands, a Plains, and a Thunder Totem. He made a morph, which immediately died thanks to Cradle to Grave, and continued to take his beats. The Corpse was only two turns off coming out, and Shingo was at 11. He made a morph and Sinew Sliver before passing.

Osawa kept attacking to keep up the pressure, and when his morph was unblocked and revealed to be a Slipstream Serpent, the game was all over.

Between games both players laughed about how so far each of them had faced land problems. Now it was down to being a regular best-of-three match to determine who would make it to the Pro Tour finals.

The mulligans for the match were not all over. Shingo this time was forced to mulligan twice on the play, clearly a little frustrated by his poor opening draws.

Osawa again had a suspended Viscerid Deepwalker, while Shingo once more had a Sinew Sliver. In many respects this looked like a replay of Game 1, except that now it was Takuya with the extra cards in hand. The quality of these cards over time was slightly improved by Sage of Epityr on turn two for Takuya, who also had a Corpulent Corpse to suspend for the turn. While he was taking early beats, Osawa's mid and late game looked to be strong. Errant Doomsayers came out for Shingo, while Osawa built up with first a Phyrexian Totem, then a morph and another suspended Corpulent Corpse.

Shingo traded his sliver for Osawa's morph (a Coral Trickster), and passed. The first of Takuya's suspended spells hit play, in the form of Viscerid Deepwalker, which did not attack. Osawa then added a Phthisis to his suspend queue, and left mana up that allowed him to Cradle to Grave a fresh Castle Raptors from his opponent. Phthisis joined the queue the next turn. On 18, Shingo had to be careful what creatures he played, but at the same time he had to deal with the threats coming from his opponent. Meanwhile, Takuya filled his side of the board quite happily, not minding too much that his Crookclaw Transmuters died to an unmorphing of Shaper Parasite. His suspend queue only grew longer with Errant Ephemeron foreshadowed should the game ever get that far.
As it turns out, the first Corpulent Corpse was more or less enough, and with four big spells still suspended, Osawa won the game.

For the first time in the match there were no mulligans. There was a turn one suspend on Corpulent Corpse for Osawa, while Shingo started with an early Looter il-Kor. This successfully hit and was joined briefly by Amrou Seekers, who didn't spend long in play before going from Cradle to Grave. Osawa had a morph, but for the time being remained unwilling or unable to stop the Looter. He swung with morph #1 and played a second, only to get hit back at by the Looter and a Cloudchaser Kestrel that had been played the turn before. 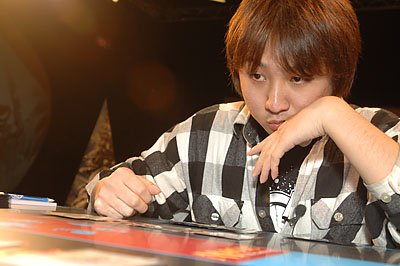 Osawa keeps up the pressure.

Shingo played a Viscerid Deepwalker and passed. That suspended Corpulent Corpse was almost ready, and to help it Osawa added another morph to his board. As Osawa was tapped out, with only a Prismatic Lens to fix blue mana, there was no danger of unmorphing tricks if Shingo ran in - only on the alpha strike. When Shingo attacked with all his creatures, morph's #2 and #3 blocked the Deepwalker. It got big enough to kill both (each a Coral Trickster), but was then rescued by Whitemane Lion.

Osawa tried to attack with Corpulent Corpse, only to have it hit by a Temporal Isolation. All of a sudden Osawa was on the ropes, largely as a consequence of all the looting that Shingo had been up to. On the next swing Cloudchaser Kestrel died to an unmorphing of Shaper Parasite. A recast Viscerid Deepwalker soon joined in the ever-growing pile of dead creatures for Shingo, thanks largely to a Phthisis which took Shingo to 11.

Kurihara used Temporal Eddy to bounce Corpulent Corpse, allowing another swing from his Looter, and did just that. The life totals were now each in single digits, and things looked close. Now was the time for Osawa's Phyrexian Totem to attack. Shingo had a Watcher Sliver and a Whitemane Lion with which to block, had 9 life, but faced 10 damage coming his way.

After some consideration, Shingo blocked the Parasite with Watcher Sliver, and went to just one. Post combat, Osawa had a Crookclaw Transmuter to kill the Watcher Sliver and take the match.

Takuya Osawa now advances to his second Limited Pro Tour final in the last year. Last time he won the whole thing. Could he become the first Japanese player to get a repeat?