Semifinals: How 'Bout Some Slaver/Shackles Chicanery?:Jon Sonne vs. Neil Reeves 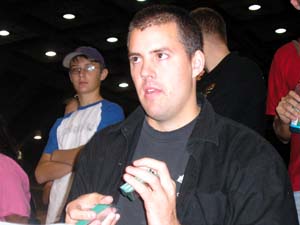 Sonne took an early lead thanks to Memnarch.

Reeves shook his head as he shuffled his Monoblue Control deck for his match with Sonne's Monoblue Tron. Reeves beat Josh Ravitz in the quarters in three straight games despite feeling like the odds were against him.

It was pointed out that all four players in the semis were now qualified for World Championships but that was not good enough for Neil, who was only playing for a chance to represent his country at Worlds. "If I am fourth, I am not going to Yokohama."

Maybe Neil should not play Jushi Apprentice until scry rotates out of Standard. His early Apprentice was Condescended and he missed his third drop while Sonne was looking at two-thirds of his Tron and spinning a Top. Jon played his fourth land and completed the set.

Neil had to discard. Jon cast Concentrate and Neil blew a Condescend to look at two cards - he pushed two to the bottom and found land number three waiting for his next turn.

Sonne had another Concentrate which Neil tried to Hinder but Sonne cashed in a Mana Leak to pick up three cards. Randy, who was commentating on the matches for the crowd, pointed out that it was a five-game match. Neil frowned, "But I am a huge favorite this game…as you can see."

"Haha…you forgot to scry. You suck." 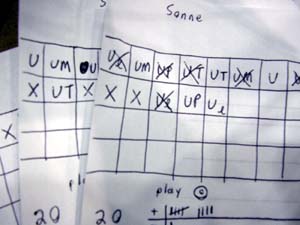 He tapped Neil out and played Memnarch on the next turn which was about all the beatings Neil was prepared to take this time around.

These guys played each other during the Swiss rounds and Neil won that match in three games. The first game's result? "Same as this one. Hey, he forgot to scry last game…make sure you write that down."

I assured him that it was in the coverage already. Neil pumped the fist and did a little dance in his seat, "Moral victories…moral victories."

Sonne mulliganed. Daniel Wong was table judging the match and had an interesting notation system which tracked all the cards that each player was plus or minus from mulligans, card draws, etc. Neil asked to look at Wong's score sheet from Game 1 and showed Sonne all the plus marks. "Those are all the extra cards you drew."

He got two ticks in the minus column as he had to double mulligan. This time it was Sonne's turn to stall on two lands. Neil played Jushi Apprentice on turn five with three mana open and Sonne Mana Leaked it and tapped Neil out. Jon remained stuck for a few turns before he found a third land. Neil was going to animate his Stalking Stones end of turn and drew first blood with the Apprentice.

"It's really hard to win once your opponent starts attacking with Jushi Apprentice," Randy announced for the spectators. Neil attacked for four - getting in again with the Apprentice - and made a second Jushi. Neil allowed Solemn Simulacrum to resolve and animated a second Stalking Stones. Jon took that opportunity to Echoing Truth the Jushis.

Neil took Jon down to 9 with his manlands and replayed one Jushi. Jon tried his own Jushi and scooped when Neil showed him the Rewind.

Turn four was a natural Urzatron but Neil chose to bust it up with Boomerang. He had no fourth land of his own and stared forlornly at the ceiling. Jon had no play until Neil's end step when he looked at three cards with Thirst for Knowledge and discarded Jushi Apprentice and Mana Leak. 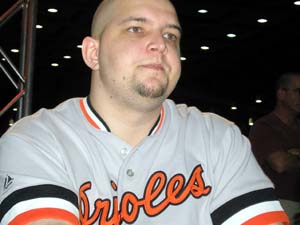 "That can't be good for me," assessed Neil.

Jon tried Jushi Apprentice on his turn and Neil put Hinder on the stack. Sonne Condescended for four. Neil tapped out to Twincast the Hinder, targeting the original spell and when the stack resolved Jon still got to scry even if he could not actually counter anything.

Neil had a Jushi of his own. Sonne tried Divining Top but Neil was ready with Annul. Sonne offered another Jushi and Neil had to allow it - he could have allowed the Top and had four mana to Rewind the Jushi but Reeves just untapped and played Vedalken Shackles. Rather than tap out during his main phase to pay for the Leak he chose to Rewind it. Jon untapped four lands and promptly Shackled the wizard.

Sonne dug for cards with Serum Visions - Neil winced as Sonne kept both of his scry cards on top of his deck.

"Listen to Neil cry with two Jushi Apprentices," said Antonino De Rosa from the next table.

Neil shouted back, "Only one of them is active and I've only drawn one card with the other. Why don't you shut up and draw some Sun Droplets?" De Rosa shut up and went back to drawing Sun Droplets.

Sonne attempted Mindslaver but the last card in Neil's hand was Annul. Jon manaburned for one. Neil drew one card on his turn, played a land and passed the turn. Jon had another Mindslaver and Neil looked for help from the top of his deck but had no answer. Jon promptly sacrificed it.

Jon untapped the Shackles to regain control of his Jushi. Neil drew a Hinder and it joined Twincast and Island in hand. Jon looked for how to best play -- or worst play as it were - Neil's hand. He cast Echoing Truth on his side of the table aiming it at Vedalken Shackles. He made Neil Twincast it and pointed the copy at Neil's Jushi. He then had Neil replay the Shackles and use his own Hinder to push it to the bottom.

Jon untapped and played Meloku. Neil's Jushi was Rewound although his free Spire Golem landed successfully. Sonne picked up a grip full of lands and untapped to send his air force across the red zone - Neil ate a token with Spire Golem and animated his Stalking Stones. Jon replayed his Jushi.

Neil peeled his card and hoped for a ridiculous top deck - he got it. He played Vedalken Shackles and it resolved. He took the Meloku and made a token. He sent his team over for five and the score was 11 to 14 in Neil's favor.

Jeroen Remie was in awe of the man who was playing his deck, "You can no longer call me the master of the draw step."

Neil disagreed and claimed that Remie remained the master of the top deck. "Jeroen does not like Vampiric Tutor because it says pay two life and shuffle your library."

Neil made three more tokens and untapped to send the squad into the red zone - including sending Meloku into Jon's four tokens. Jon elected to trade the four tokens on each team and cycle Jushi for a card, putting it in the path of the Stalking Stones.

Sonne untapped and tried Memnarch but Neil had the Mana Leak he had subsequently topdecked. Jon had not played a land which would have allowed him to pay. Even if he had it would not have mattered - Neil could have simply returned all his lands and won with an alpha strike. Had the Memnarch resolved he would have played an Urza's Tower, stolen the Meloku back by taking the Shackles, and still had mana left to make a token.

Sonne led off with Serum Visions. He attempted another on turn three before playing a land and baited Mana Leak from Neil's hand. Neil's end-of-turn-three Thirst was Condescended and Jon only pushed one of the two cards he looked at.

"No, scry cards are supposed to go to the bottom. That's what scry is for." 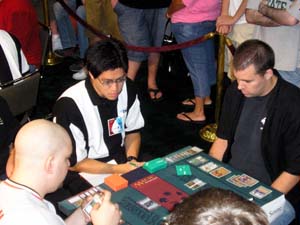 Reeves and Sonne had a big crowd around them.

Jon did scuffle a bit for lands with four to Neil's six. He found a fifth land but was nowhere near a Tron. Neil made a 3/3 and started to attack. His Shackles was Mana Leaked but Jon fell to 14 from the Stalking Stones.

He crept toward the Tron and played Jushi Apprentice. Neil nodded - he had another Shackles in hand. Sonne tried to Mana Leak it and Neil sat back in his chair and crossed his arms. He had six mana available and a number of options in hand but Neil chose to pay this time. Shackles resolved.

Neil stole the Jushi end of turn, although Jon did get one tick mark in the plus cards column of the judge's notation sheet. Stalking Stones continued to tick away while Jon searched for threats with his Top. When Neil attempted to draw a card end of turn, Sonne cast Echoing Truth. Neil had the Hinder.

Neil decided to put Jon on a two-turn clock and attacked with Stalking Stones and Jushi while Jon was at 8.

"I can do math. I come from the fine Arkansas school system," Reeves said.

That Arkansas school system will be well represented this November in Yokohama as Neil took the game and the match to ensure himself a place on the U.S. National team.