Semifinals: I See What You Did There

Pro Tour–Berlin saw Luis Scott-Vargas tear through the competition and win a series of hard-fought grinds in the Top 8 to emerge a Pro Tour champion. Since that day, he has been on an absolute tear, winning a Grand Prix, finishing 11th at Worlds, and Top 8ing the very next regular-season Pro Tour. His opponent Brian Robinson is the only other American left playing in Kyoto, battling his way through his first Pro Tour Top 8. He brought perhaps the most interesting deck of the single elimination rounds to the table with his Four-Color “Dark Bant” Doran / Rafiq build. 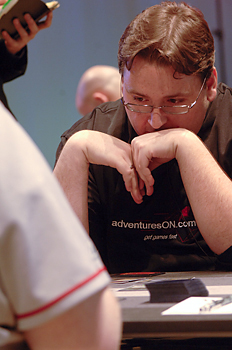 Luis Scott-Vargas focuses on the game.Both players had very strong early starts, with Robinson opening on Noble Hierarch into Doran, followed by Rafiq of the Many. Luis had Windbrisk Heights, then Bitterblossom, but on the third turn he took a monstrous 14 damage and fell to just 6 life. With Bitterblossom chugging away, he had less than five turns to find a way out of death from his own enchantment, let alone the massive team facing him down from his opponent’s side of the board.

To that end, Luis played Tidehollow Sculler, stealing a Birds of Paradise from Brian Robinson’s hand. The 0/1 flier was particularly deadly with Hierarch, Rafiq, and Doran on the board, potentially attacking for as much as 4 damage. Unfortunately for the Pro Tour champ, he soon lost the 2/2 to a chump block following an all-out attack from his opponent, which gave Brian his Birds back. He promptly tapped out to play both it and another copy of the card, and a turn later Luis was dead to a blisteringly fast start from Brian Robinson.

The second game was a pseudo-replay of the first, with Brian opening his first turn on a one-mana accelerator in Birds of Paradise and Luis playing Bitterblossom. Knight of Meadowgrain joined the table second for LSV while Brian played Gaddock Teeg, missing a third land drop on back-to-back turns. He did have a Scattershot Archer to start shooting down his opponent’s Faerie Rogues, but before the Archer could get active, Luis played Glorious Anthem to protect his token horde.

Scott-Vargas went on the war path with his Knight and a Faerie token getting in. That put Brian at 14, and he could only muster a Rhox War Monk as defense. Unimpressed, Luis revealed Terror to bin the 3/4, and bashed Brian to just 7 life. Trying to stage a comeback, Robinson took a point of pain to play a Wilt-Leaf Liege. Scott-Vargas was quick to point out to his tapped-out opponent that his Luis’ plethora of flying Faeries would be lethal the following turn considering Brian had tapped his only flier, the first turn Birds of Paradise, to play the Liege.

Birds of Paradise opened up the game for a second time in the match, with Doran dutifully hitting play on Brian Robinson’s second turn. He made good use of his accelerated mana advantage, playing a Wilt-Leaf Liege on his third turn, then attacking for a potential 7 damage with Doran. Luis was ready, however, using Path to Exile to RFG the legend, then following up with Kitchen Finks for added defense. 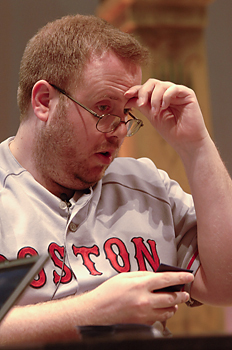 Brian Robinson sweats it out.Brian attacked with his Liege and Birds of Paradise, but didn’t have anything to follow up on his fourth turn, either out of gas or waiting to run shenanigans on his opponent’s turn. When Luis played a Bitterblossom unmolested, it looked like the former for Robinson. A second attack from the Massachusetts resident dropped Luis to 17, but from there it was all about the reigning “best player in the world.” Scott-Vargas plopped Cloudgoat Ranger into play and began cranking out 1/1s with his Bitterblossom. Meanwhile Brian struggled to catch up with a lowly Gaddock Teeg, taking additional damage from his own mana base of painlands.

A second Wilt-Leaf Liege from Brian made his first a 6/6, which he sent it in. Luis was ready, blocking with a Kithkin token and Cloudgoat Ranger, then tapping three Kithkin to pump the Ranger, killing the Liege. A follow-up Rhox War Monk was all Robinson had before shipping the turn, and Luis continued to explode onto the board, dropping a second Kitchen Finks and Knight of Meadowgrain alongside an additional Faerie from his ‘Blossom.

The next combat step saw Brian’s attacking War Monk die to a triple-block from Finks, Knight of Meadowgrain, and a Kithkin token. Luis got his Finks back as a 2/1, and the totals, when all lifelinking was considered, stood 22-15 in Scott-Vargas’ favor. Brian played the last card in his hand, a Forest.

“Best card in the deck? Forest!” he said, down but not quite out.

Luis paid no mind, attacking with a second Cloudgoat Ranger pumped by three Kithkins. That dropped Brian to 9, and he furiously spun his wheels trying to find a means of attacking through his opponent’s horde of Kitchen Finks, Kithkin Soldiers, Faerie Rogues, and the Cloudgoat Ranger. When he found no help on the top of his deck and verified that his life was indeed at 9, Brian scooped to send the match to a third game.

Not one but two one-mana accelerators opened the fourth game of the match for Brian Robinson, who played Noble Hierarch followed by Birds of Paradise. Luis Scott-Vargas had Knight of Meadowgrain to trump, but he was trumped right back as Robinson plunked Doran, the Siege Tower into play. From there the board was Rhox War Monk for Brian, then Scattershot Archer and a Spectral Procession / Glorious Anthem combo for Luis. The fourth game was going to be an intricate assortment of game plans and combat steps.

Luis used his newly accumulated air force to bash Brian to 14, nearly tying the score. He kept his Knight of Meadowgrain back, and prepared to possibly get a free card the following turn thanks to his Windbrisk Heights. Brian Robinson wasn’t having it, however, playing Wilt-Leaf Liege to further bolster his forces and bashing. Luis chumped Doran with Knight of Meadowgrain, and when all the smoke had cleared the totals were 14-10 in Brian’s favor.

Luis attacked right back, using Wrath of God to blow up the board after doing so via Windbrisk Heights, then followed up with a Kitchen Finks. It suddenly became very apparent just how dependent Brian had been on his one-mana accelerators; he had only two lands in play following the Wrath of God, one of them an Ancient Ziggurat. When Luis played a Cloudgoat Ranger the following turn, Brian extended his hand in defeat. 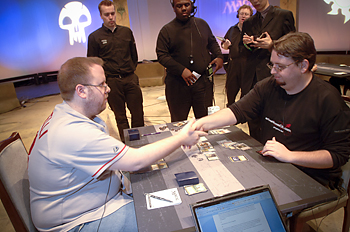 Luis Scott-Vargas focuses on the game.

Luis Scott-Vargas defeats Brian Robinson 3-1 and advances to the Finals!