This is it – the part that these teams have worked so hard for all day. The drama, the glory, the...fabulous prizes? All these things await the winner of this match.

Jairo Liquidano and Alex Shvartsman both play nothing but lands on their first few turns, and the first creature of the game is a morph on Alex's side. He attacked and unmorphed it, revealing Sootfeather Flock. 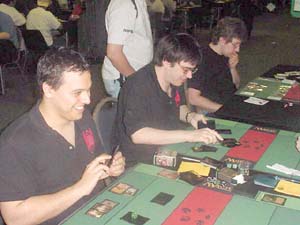 Jairo's Callous Oppressor was already in play at this point, naming Bird. Jairo then played a morph and then Covert Operative. At the end of Jairo's fifth turn, Alex played Cruel Revival to kill the Oppressor. Alex played out a Putrid Raptor and takes the offensive.

Even though Alex has been matching Jairo pretty evenly, he fell quickly when Jairo played a Sage Aven. Alex couldn't find any answers to Jairo's flying armada, and died shortly after to a well-timed Torrent of Fire.

The first creature of the match is a Goblin Turncoat for Pasquale Ruggiero. Despite Zvi Mowshowitz's best efforts, he cannot keep up with Pasquale's offense and has only one creature in play on the fifth turn. When Pasquale passes a turn without playing a creature, Zvi quips, "Ah, that's what we like to see!" However, his only creature is Thundercloud Elemental and he activates the Elemental to tap all Pasquale's creatures with toughness of 2 or less. The only creature on Pasquale's side that escaped this fate was his Dragonstalker.

Zvi fended off an imposing opposing army with a Daru Stinger and the aforementioned Elemental. He attacked with a morph creature, able to swing through easily now that Pasquale's board is filled with tapped creatures.

"What you're saying is you want me to pay six mana to attack with that creature? You want that guy to stay at home!" Zvi quipped when Pasquale activated his Whipgrass Entangler. With six Clerics in play, Zvi's attack step was nothing more than a minor consideration.

When Pasquale attacked with his Dragonstalker, Zvi made a tough decision and eventually settled on taking the damage. During his next turn, when Pasquale was tapped out, Zvi attacked with one morph creature and played a third to keep the other two company.

This match has gone quickly from exciting to a creature stalemate, with tough decisions needing to be made every turn. When Pasquale attacked with everyone on his side, Zvi got slightly snippy about the precise order of the subphases within the combat step. The debate resolving in his favor, Zvi ended up on the winning end of this combat phase when he unmorphed Aven Liberator and gave it protection from black.

Pasquale quickly decided to simply pack his creatures up and save himself further embarrassment at the hands of the mighty Mowshowitz.

In the C seat, Jean Charles Salvin and Justin Gary were matched up together. Jean Charles led with a forest, and Justin countered with a mountain and an elf of his own. Jean Charles, in the play of the day, dropped a Taunting Elf. Blows are traded, but Jean Charles gets the advantage with a Words of War.

The highlight of this game was when, after both players had built up a huge army, Jean Charles skipped his draw step to take Justin to 18, then pushed through 18 points of damage by swinging with Taunting Elf and a bunch of big guys.

This game was, I must admit, not incredibly exciting. Jairo's only plays during this game were a morph and a Sage Aven. Alex played Withered Wretch on his second turn, and Swats Jairo's morph the turn after he cast it.

Alex followed up his skillful destruction of Jairo's creatures with his own Spined Basher and Berserk Murlodont, and Jairo just couldn't keep up with Alex's offense. He eventually scooped to a Twisted Abomination enchanted with a Clutch of Undead.

"That game was longer than any of the previous three rounds I've played," Zvi commented while shuffling for this second game. Zvi's first creature this game was a Deftblade Elite, while Pasquale countered with Starlight Invoker.

Pasquale played a second creature (a morph) and Zvi answered with another morph. And, yet another morph came out to join the face-down party. Pasquale took a moment to peruse his teammate Jean Charles' game against Alex, but Zvi remained intensely focused.

Zvi has been stuck on land for a turn, passing his fourth without playing another to join his plains and lone island in play. When he does play a land, it's a Secluded Steppe, which isn't helping him deal with Pasquale's offense. "Did you just play Trickery Charm?" Zvi asks Jean Charles across the table, slightly rattled now that Pasquale has more creatures than he does.

The jokes have evaporated completely, and now it's time for Zvi to shine and do what he does best. When Pasquale attacked with all his creatures, Zvi says, "I'll find out how good I am at reading you," and played Unified Strike. An attack phase that could have gone horribly for Zvi has now passed with little more than a whimper from his opponent, so proud and confident just minutes ago.

Zvi attacked back with everything that he could muster and left Pasquale alone. "Let me know when blockers are final," he said, turning to take a look at his teammate's match. He taps out and plays Thundercloud Elemental, which could be the deciding factor in this match. Zvi played out more creatures face-down, and quickly overwhelms Pasquale's small but numerous clerics.

In this second game, Jean Charles began with amazing tempo; a rounds 2 and 3 Goblin Brigand. Justin found a Forgotten Ancient on turn 4, and blocked a Brigand with it; Jean Charles responded with Shock to kill the Ancient as quickly as possible. 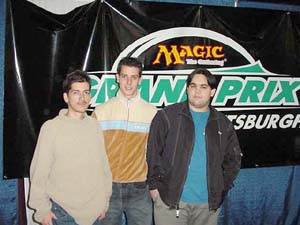 The tempo swung in Justin's favor when he got a Fierce Empath out and used it to pull an Ancient Ooze from his library. After Justin played the Ooze, Jean Charles simply conceded rather than suffer further beatings.

"I made a lot of mistakes," Jean-Charles admitted after the match. "It wasn't my best game."

Jairo played a morph on his third turn again...I sense a theme throughout these games. Alex Swatted the morph and played a Screeching Buzzard on his next turn. Jairo played another morph creature, but Alex followed up with a Berserk Murlodont.

Sage Aven entered play on Jairo's side again, and Alex blocked Jairo's attacking morph with his own Screeching Buzzard. In a stunning display of astonishing Timmy-ness, Alex cast Phage the Untouchable.

Unfortunately, Jairo was holding the answers – Shock and a Scattershot. "Scattershot came off the top," a bystander told me after the match. Meanwhile, Jairo's been swinging with his Keeneye and Sage Aven.

On his next turn, Alex cast Dragon Shadow on his Berserk Murlodont, as Phage wasn't around any more. Jairo slammed the final nail in the coffin with Erratic Explosion, revealing Covert Operative and killing Alex's hopes of winning completely. "I was one turn away from just winning outright!" Alex said after the match.

In Justin's Game 3, he got out Wirewood Hivemaster on turn 2, then proceeded to play several more elves. Jean Charles had only morph creatures to Justin's token army. Both players traded spells and creatures evenly for a while, but Justin ended up on top and victorious.