In the final two rounds of Grand Prix New Jersey, Illuminati (with Justin Gary in the "A" seat, Zvi Mowshowitz in the "B" seat, and Alex Shvartsman in the "C" seat) squared off against Team Cardshark (featuring Jason Huang in the "A" position, Paul Sottosanti in the "B" and Adam Fischer in the "C"). 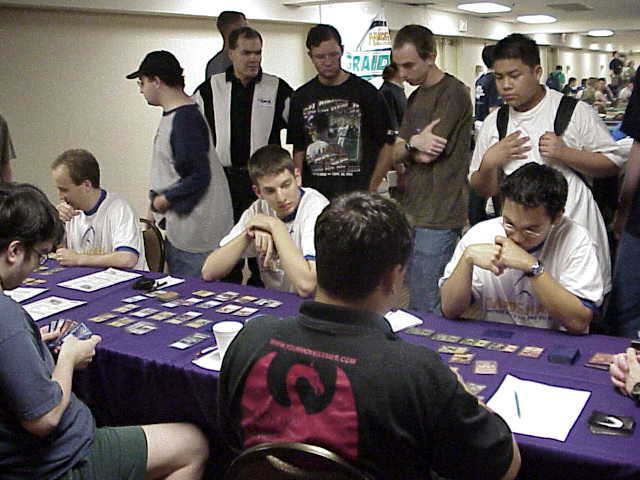 The creatures traded back and forth fast and furiously this game. Eventually, one of Justin's two (!) Violent Eruptions cleared the board for his rather large Limestone Golem to swing. A Browbeat made life very hard for Jason, as he needed to decide whether to drop to five life, or allow Justin to draw three cards. Choosing to drop to five, Jason began mounting an offense with Fledgling Imp and Dusk Imp, while Thermal Blasting the Golem straight to the graveyard. Justin drew more creatures, but Jason started topdecking his game, bringing out Faceless Butcher followed by Chainer's Edict. The game ended with Jason at two life to Justin's zero.

Paul dropped an early air force with Battlewise Aven, Aven Flock and Aven Fogbringer. Unfortunately for him, Zvi countered with Anurid Swarmsnapper and Scalpelexis. Zvi's maindeck Coral Net further frustrated the board position, enchanting the Aven Flock negatively. Holding a Flash of Defiance, Zvi waited patiently to draw a mountain to punch through Paul's mostly white defense, as Paul found out with a mid-game Peek. His literal horde of seven large men stood ready to pounce handily onwards. Zvi decided that he was tired of waiting for a mountain and cast Turbulent Dreams for five, returning all of Paul's defense and swinging for nearly thirty damage plus the Scalpelexis.

After replacing a couple of worn cards in Paul's deck, the match (if you could call it that) got underway with Paul playing a sizable air force, and Zvi not drawing a single Island and dying rather quickly to color screw.

In a start that surprised nobody, this game started out bloody with a Blazing Salvo, Crypt Creeper, Crackling Club, Barbarian Outcast and Fledgling Imp all ending up in the graveyard between the two sides by turn three! Gary quickly played down a Frightcrawler and Barbarian Bully, but they were met on the board with the huge Carrion Wurm from Huang. The two creatures were going to block the Wurm (or at least cause some damage via the Bully's punisher ability), but a well-timed Thermal Blast put an end to that plan. Having run completely out of non-land cards, Justin quickly fell to the 6/5 attacker.

This time, the game started with a lot more action, with Paul playing out a Benevolent Bodyguard, Spurnmage Advocate and Vigilant Sentry against Zvi's Krosan Avenger and Archer. Paul attempted to further his defenses with an Aven Flock, but it was Syncopated by Mowshowitz, who then cast a Breakthrough on his own turn to get himself to threshold and draw four cards. This time Paul had drawn no islands, and was forced to give Zvi several cards back from his graveyard to keep from dying to Scalpelexis. This brought Zvi back down from threshold, but he regained it the next turn by casting Flash of Defiance, Mental Note, and Churning Eddy, which got rid of the Advocate. This left Paul at a mere five life, with virtually no defense. Zvi calmly flashed back the Flash, killing Paul.

Adam lead off with a turn two Mongrel, which was met with a Phantom Nomad, which died blocking the Mongrel backed by an Afflict. Soon though, the dog found himself the object of Kirtar's Desire, and a Wormfang Drake held down the fort against a Krosan Archer and Treacherous Werewolf. Then, he needed to deal with a Shade's Formed Archer. He drew just the answer with Lieutenant Kirtar, who was capable of outright removing the creature from the game, should it choose to attack. He then added a Strength of Isolation to his Wormfang Drake, making it a gigantic 4/6 Pro-black flier. It needed to stay on defense though, as Alex teetered on the edge of losing at five life to Adam's thirteen. But, then Alex drew and played a card which was quite amazing against Adam's deck: Stern Judge. With one swamp out of his own versus his opponent's four, Alex looked good to win the damage race all of a sudden, with the board position entirely locked (sans a threatening Cabal Torturer which found itself a good five cards away from threshold). Finally Adam tried to break on through with a second Form (on a green creature), but found himself on the wrong end of a well-timed Embolden.

Finally, Adam started pitching cards from his hand to the Cabal Torturer, allowing him to kill the Stern Judge. This delay in getting to threshold left him at a very unsafe one life. Adam kept trying to punch through with his fatties, but kept being thwarted by cards such as Pay No Heed. Finally, when it looked as if Alex had run out of blockers and was in danger of being overwhelmed by sheer numbers, he drew a Soul Scourge which resolved and sent his opponent to the negative life totals. 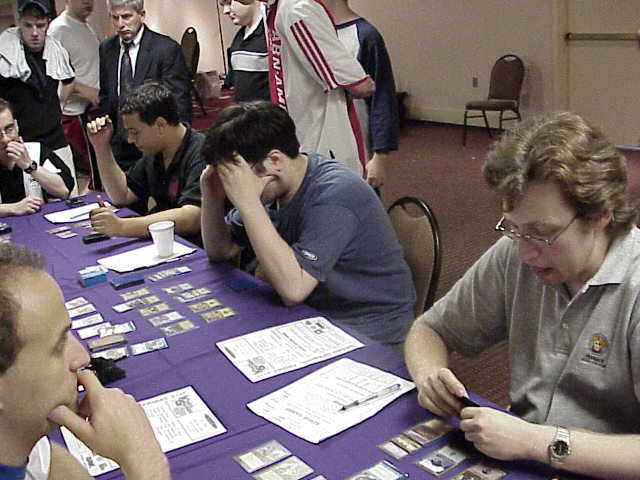 Game one took as long as the other five games played by their teammates put together, so they sat down knowing that Alex only needed one win to put it away for his team, while Adam needed to not only win, but win a second time afterwards. They shuffled up their decks to play, with Adam choosing to play. He led with a speedy Cabal Trainee, followed by a juicier Nantuko Shade. This game got a little more under control with Lieutenant Kirtar halting the Shade for a minute, followed by a Battle Screech (with flashback). How quickly the momentum of this game had swung! Alex used two of the fliers to block the Trainee and Shade, and then attacked with his remaining fliers for four. The bird tokens allowed him to bring a Wormfang Drake into play, though Adam made a bold play with Cabal Coffers and Krosan Archer. Resilient Wanderer further locked the board down, with Alex's fliers staring the Archer, while his Wanderer and legend kept the potentially 9/8 Shade at bay.

Looking to get something going, Adam laid down a Zombie Assassin, though he only had one card in his graveyard. Blocking the Drake with his Archer, Adam discarded an Afflict. "That other card must be insane!" Alex exclaimed, eyeing his opponent's remaining card in hand nervously. It was a Nantuko Disciple, played the following turn, which gave the Archer enough punch on defense to safely hold off Alex's flier without any further need for discard. Alex met this challenge with a Militant Monk and Teroh's Vanguard, leaving the board once again locked at complete parity with the Russian at fourteen life, and the dot-commer at ten.

Fischer looked ready to make a move by taking out the Lieutenant with his Assassin (clearing his own graveyard entirely). This allowed him to begin swinging with his Shade, forcing Alex to either chump block or pitch a card to his Wanderer a turn. Alex chose to chump block with his remaining Battle Screech token. The Wanderer became pluralized with a second Nomad joining his brother in arms. Although Alex started discarding to make his guys protection from black, he gained another four life with another Faithful. Shvartsman's board looked awfully repetitive at this point.

Adam summoned a Wild Mongrel. "That guy is less than relevant right now", said Alex, who then drew and played a Shieldmage Advocate. Looking at his opponent's still empty graveyard, he then admitted that "This guy is less than relevant right now too." Looking to kill the Shade (which could be pumped to 13/12 between the Coffers, Swamps and the Disciple), Alex blocked with his Advocate, both his Wanderers, both his Faithful, the Wormfang Drake and his Militant Monk. Adam had no tricks, but Alex had a completely demoralizing Pay No Heed, saving his otherwise doomed Shieldmage Advocate, Militant Monk and Wormfang Drake. It was like countering a really demented Infernal Harvest. Seeing an open opportunity, Alex swung with most of his team, facing down a Treacherous Werewolf, Wild Mongrel, Krosan Archer, and Nantuko Disciple. Adam blocked one Wanderer with a one-time-pumped-through-discard Mongrel and the flier with his pumped-by-the-Disciple Archer. None of these creatures died thanks to Embolden. An immediately cast Treacherous Vampire seemed in position to stop up the game yet again.

Did I say stop up the game? It went large with a Shade's Form, forcing Alex to use his Shieldmage to prevent the damage. Fortunately the last card in Alex's hand at this point was a Ray of Distortion, which ended that threat before it even started. This brought both players into topdeck mode, and Alex got to swing once more thanks to the tapped Vampire, leaving the life totals at 18-3. Adam's Mind Sludge knocked two lands and a Shelter out of Alex's hand. The Mongrel was a lot more relevant now, since without it's ability to change colors, Alex could have easily have Sheltered his Wanderer naming Green, and then pitched his remaining three cards to make sure they were both protection from Green and Black to win the game. Instead, he just attacked with his entire army, including a Mirror Wall. This gave him just enough attackers to win.