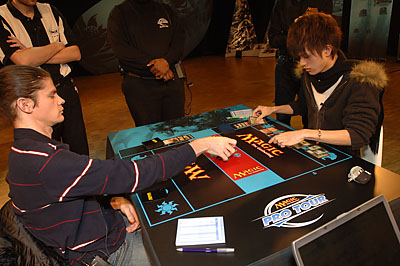 Mike Hron and Kenji Tsumura trade blows.ike Hron was playing first for the opener of this Semifinal, playing off a six-card hand from a mulligan. He ended up with just lands for his first two turns, while Kenji Tsumura had turn-two Magus of the Library on the draw, a play that threatens to start drawing a free card every turn for zero mana and just happens to line up exactly right with going second. However, Hron had a Midnight Charm to break up that plan, dodging what likely could have been a game-deciding card had it been given even a few turns to start firing.

Hron was still slow out of the gates turn three, just dropping a land and passing the turn back again, while Kenji had a Suq'ata Lancer, dropping the American to 18 immediately. From here Hron finally got some game going in the form of Trespasser il-Vec followed by Thallid Germinator. However, Kenji suspended a Nantuko Shaman, then when attacking next turn killed the Germinator with a Thrill of the Hunt and using his other four mana to suspend a second Nantuko Shaman, making a jump in tempo and card advantage in the same turn. Trespasser dropped Kenji to 13, and then a Spectral Force plopped onto the table for the Japanese player.

The fatty didn't slow Kenji any, however, as his whole team swung in. Spectral Force ate a Shaman, but then Flamemaw Kavu dropped down to mash the Trespasser.

Hron, now down to 10, pointed a Strangling Soot at the Kavu now, allowing him to play out his Mire Boa with the last two mana. From here the game slowed down a bit for the first time, with Durkwood Baloth joining the table for Kenji and Stonebrow buffering Hron's team of fat.

Kenji spent an unusually long time (for him) thinking hard here. At length, he decided to attack with everybody. Spectral Force blocked the Baloth, boa tangled with the shaman, and Stonebrow fought the lancer. Strength in Numbers on the Baloth got it to 8/8, big enough to take out the Spectral Force, and a Dead // Gone put the last damage needed to finish Stonebrow. Just like that, all of the creatures were dead.

Ok, new game. This one starts with Hron at 10 and Kenji at 14, with two cards for Hron to Kenji's one. Whatever Kenji's card was, one of Hron's turned out to be the powerful Wurmcalling, starting for now with a 1/1 and buyback. Kenji added a Keldon Halberdier,
while it was another 1/1 token and a Shadow Guildmage for Hron.

Getting back in the lead, Kenji attacked and killed a tiny Wurm, then used Grapeshot to kill both of Hron's remaining creatures after also summoning a Giant Dustwasp. Hron was again down to nothing, this time facing a 3/3 flier and a 4/1 first striker. Forced to give up on the buyback plan, he just went with a 5/5 wurm and passed it back. Everything fell apart from there, as Utopia Vow hit the giant Wurm, enabling an attack that dropped Hron to just 3 life. Checking his final draw, Hron conceded quickly.

The American muttered at the quick turn the end of the game had taken and shook his head a bit as he gathered up his cards, but he looked to be refocusing himself by the time he got to his sideboard. Losing the opener in a close battle is tough, but it's no reason to fall apart, and you could actually see him calm down as he got back into the rhythm of preparing for Game 2.

Thinking long and hard and even scrunching his nose a bit, Hron eventually decided to throw back the opening seven for this one as well, letting out a bit of a frustrated sigh as he sent the cards back to his deck. Drawing up the next six, he immediately shook his head and went back into the think tank. Back in went the six, and at last Hron had a hand he could stick with, down to just five cards on the play. 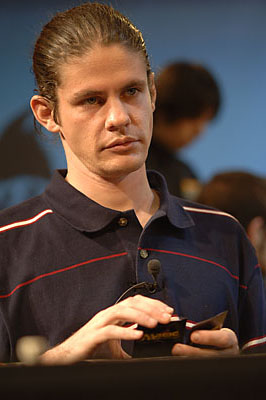 Hron keeps his cool after a frustrating first game.

Despite the double mulligan, Hron put together a nice little beatdown with Essence Warden followed by a Darkheart Sliver. He didn't have a third land, but he was able to use a Chromatic Star to suspend a Corpulent Corpse for later. Kenji went for an Orcish Cannonade on the Sliver, not having played anything himself to this point. Rightly assuming that cards were important than life for now, Hron sacrificed the Sliver to gain 3 life, denying Kenji his extra card off the removal in the process.

The Warden charged in again, making it 15 life for Kenji, and was then joined by a Thallid Germinator. Playing a fourth Mountain, Kenji quickly shipped the turn back again. Could he be color-screwed? Could Hron actually pull off a double mulligan in the Top 8 against one of the very best players in the game's history?

Hron sent his team in again, dropping Kenji to 12. Playing a fifth Mountain, Kenji again sent it back without casting anything. The next attack made it 9 for Kenji, and a Shadow Guildmage came in to accelerate matters as well. Kenji at last found a Forest, hardcasting a Nantuko Shaman to get some defense going, but Hron had a Strangling Soot to remove the blocker. As soon as he saw the spell, Kenji conceded, and just like that, Hron had somehow pulled off an incredible win despite the double mulligan.

Regaining confidence after taking a beating Game 1 and mulliganning to five Game 2?

This time it was Kenji's turn to be on the play with a mulligan, though he was able to keep his hand at six. Hron had the luxury of keeping all seven cards for the first time in the match. Like the previous game Kenji didn't have creatures for the early turns, while Hron led with Greenseeker, a suspended Search for Tomorrow, and a Thallid Germinator. Kenji led his own team off with a suspended Nantuko Shaman, while a Darkheart Sliver joined Hron's team. 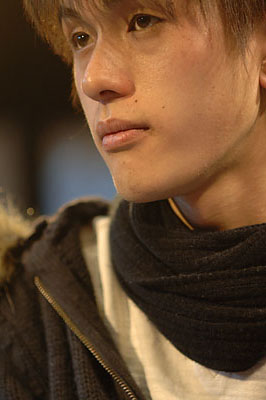 Drawing two cards this turn thanks to the Shaman, Kenji sent the creature into the red zone. It traded with the Sliver, and the life totals went to Kenji 16, Hron 23. Kenji added Radha, Heir to Keld. Passing the turn to Hron, Hron first used the end of Kenji's turn to Greenseeker out a land. Discarding a Corpulent Corpse he could actually play in the process drew a quick glance from Kenji, and though it was a quick exchange, I swear Hron had a little smile when he saw Kenji's reaction.

It all made sense next turn. Playing out a Deadwood Treefolk, Hron was able to grab the Corpulent Corpse back from the dead, ready to hardcast it next turn. Firemaw Kavu came down for Kenji, sending the Germinator to the graveyard. From here, though, Hron was starting to take command of the position. Wurmcalling with the buyback added a 2/2 to the table, and back it went to Kenji, who paid his echo and passed it right back.

Things went back and forth for a few turns from here as each player added more creatures to the board, including a Durkwood Baloth for Kenji, but a few turns later Hron was able to send in a Tromp the Domains for just enough to be lethal. Kenji nodded but didn't scoop, which gave Hron some pause, but he was committed at this point and sent his creatures in to see what was up. Kenji quickly conceded as soon as all the attackers had been declared, just making sure his opponent had committed everything, and giving nothing away in the process until he knew for sure he was dead.

Kenji evened up the mulligan count at two apiece for the match and then we were off. This time it was Pendelhaven Elder for Kenji, a card that doesn't seem to fit his main deck but makes perfect sense as a sideboard option to help hold off all the bears in Hron's deck. Right on cue, Hron summoned Darkheart Slivers turns two and three, both of which needed to stay back for now once the Elder was online.

From there the action stalled until turn five, when Keldon Halberdier came down on one side to the commanding Spectral Force on the other. Yet again Flamemaw Kavu came down, wiping out a Sliver and making it 23 Hron, Kenji 20.

Next was Search for Tomorrow and Essence Warden for Hron while Kenji paid off the echo on his Kavu. Pulling farther ahead on the boad, he added Scarwood Treefolk to his team, having more than enough defense to not worry about the creature coming into play tapped. A Midnight Charm on the Halberdier while Kenji was still tapped out cleared the way, and suddenly Spectral Force was charging into the red zone at last. As expected, the Kavu stepped in to block, and the two bombs went off to the graveyard while Kenji took 6 trample in the process.

Trying to get something going, Kenji went for a suspended Nantuko Shaman then took 3 from the Scarwood Treefolk. Adding a Giant Dustwasp to his side, then using Grapeshot on the Sliver and Warden, Kenji was starting to look pretty solid despite the 11-27 life deficit. In came the tree, which was gang blocked, resulting in the wasp and tree trading. 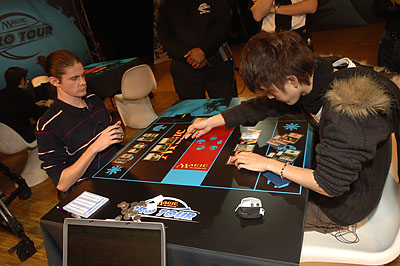 Hron and Tsumura close in on the end.

And, in a devastating move, that put just enough creatures into the graveyard to allow Pit Keeper to yank the dreaded Spectral Force back from the land of the dead, with enough mana left over to cast it. Given how incredibly difficult the monstrous fatty had been in the past for Kenji's deck, having to deal with it a second time was surely going to be a tall order to say the least. Kenji did what he could, summoning a Herd Gnarr, but Hron had the Tromp the Domains as well. Everything came in, and when the smoke had cleared it was Spectral Force on one side of the table to Herd Gnarr on the other, with Kenji down to just 2 life.

The Herd Gnarr got a free attack in next turn while the Force was tapped down, but Kenji was out of gas and had to pass the turn. As if things weren't bad enough for the Japanese player, Hron next summoned a Yavimaya Dryad, adding yet another creature that threatened to kill Kenji and for which he had no answer. Not even bothering to draw his next card, knowing he was out of outs, Kenji gave a big smile and conceded immediately with a handshake for Mike Hron, who was now off to the Finals with a very good shot to win the whole thing.