Itaru Ishida The only non-Australian member of the top 8, having snuck in by the most slender of margins on resistance, has progressed to the final 4 and now plays Melbourne's Andrew Grain. Ishida has drafted a removal-heavy red/black, and must face Grain's red/white monstrosity.

Ishida plays and opens with a Viridian Longbow, followed by a Goblin Replica. Grain opening gambit consisted of a Raise the Alarm and a Yotian Soldier, which was brought down straightaway with an Electrostatic Bolt. Ishida set his mind to task on slowly removing the Soldier tokens.

Attacking into the Goblin, the soldier tokens were duly brought down, but they had done their job putting 1 point of combat damage on the Replica, which in turn was finished off by a Granite Shard. Ishida, unfussed by all this, pushes his offensive forward, with a Vulshok Berserker, bringing Grain down the 14. Grain then found a Leonin Scimitar with his Taj-Nar Swordsmith, equipping his Skyhunter Cub, which attacked back to even the life totals up at 14.

A Yotian Soldier on Ishida's side provided ample defense on the ground, as Ishida took out the Swordmith and an Auriok Steelshaper, with 2 more Electrostatic Bolts in consecutive turns. With little defense Grain is brought down to 7 on the following turn, and then to 6 with the Longbow. Attacking twice with the Cub however, keeps Grain in the game, and leaves the scores close at 7-6 in Ishida's favour - making Ishida think long and hard with a Grain finding a Granite Shard. An alpha strike from Ishida, with the Yotian, the Berserker and a freshly activated Stalking Stones, looked imminent, but a Grab the Reins took the stones out of combat, with Ishida tapping for 1 mana to keep them off blocking. With no mana left, he swung for 4, putting Grain and just 2, but could only consider doing 1 more with the Longbow equipped Yotian.

Passing back he took a burn, taking him down to 6, and then to 5 in the end step - letting Grain attack with the Cub for 4 in the air and getting home for the last point with the shard for the closest of wins possible.

Both players start out with second turn Myrs, the new standard on limited play (as opposed to the third turn morph), with Ishida finding a third turn Nim Shrieker. Sadly for him, the flier didn't last long with Grain trumping it with a third turn active Granite Shard.

Ishida took the offensive to Grain with a Hematite Golem, putting grain down to 13 within the next 2 turns, with Grain unwilling to block with his unequipped Skyhunter Cub or his Auriok Steelshaper. Trying to compound the pressure for Grain, Ishida cast a Goblin Replica, which was picked off by a Pyrite Spellbomb the following turn before the mana was open for it's use. 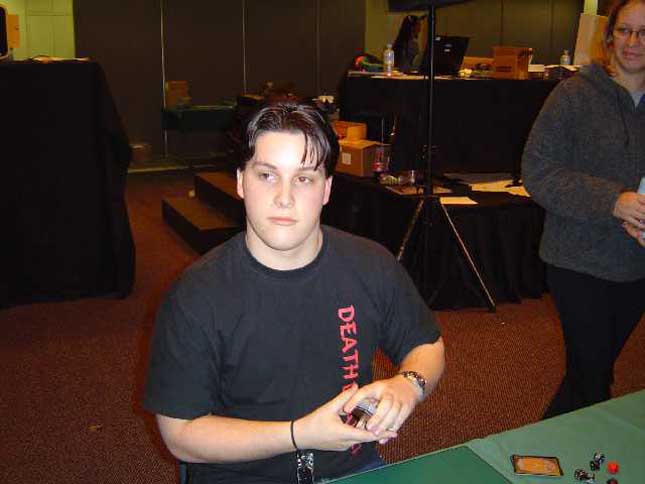 The cub scored 2 for Grain, but fell to a Terror when an attempt to equip it with a Leonin Scimitar (searched for by a Taj-Nar Swordsmith). All was not lost as the defenses held with a Banshee's Blade and an Ogre Leadfoot coming into to hold the fort. A nominal offense could not be offered however as Ishida's Krark Clan Grunt was there to threaten to take down any attacker with first strike.

Not even being allowed to power up his Banshee's Blade by sending in creatures sacrificially, Grain seemed content to hold back and whittle away the required 20 by Granite Shard. Ishida found a Longbow to re-enter the race in the stalled game but by then had already taken 9 from the Shard, leaving him on 6. Grain, sensing the victory was not far off, and being able to keep the weaker creatures of the board (Nim Shriekers and Myrs) pushed forward with Raise the Alarm tokens, the Ogre Leadfoot and the Taj-Nar Swordsmith. With only a Yotian and a Krark Clan Grunt (the Hematite Golem and the Stalking Stones were tapped down with the Auriok Transfixer), Ishida was forced to take another 2, dropping to 4 and after drawing 2 more land he scooped and congratulated Grain in his victory.