Semifinals: It's All in the Timing

Semifinal: It's All in the Timing

Italy's unflappable Andrea Giarola was quiet as he shuffled up for his match against Guillaume Matignon. Giarola had drafted a red-green deck with some ramp tendencies, and had just edged out Koutarou Ootsuka in the quarters. By contrast, Matignon had swept Brad Nelson in three straight games. Giarola knew he was at a disadvantage. The pros agreed. Looking at the decks in the Top 8, Players of the Year Shouta Yasooka and Yuuya Watanabe agreed that Matignon's deck was the strongest.

Matignon put pressure on Giarola early in Game 1 with Lighthouse Chronologist, then Champion's Drake and one level up. Giarola had played Nest Invader, and answered with Spawning Breath taking out the Drake before it could grow to a 4/4. Matignon replaced it with Guul Draz Assassin, pushed his Chronologist to level 3, and gave himself a few quick face slaps to refocus himself. 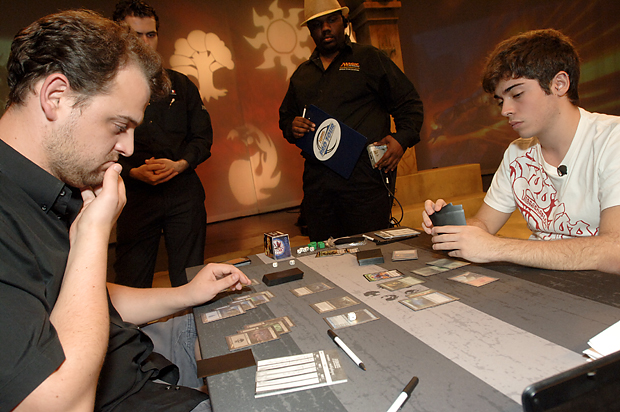 Guillaume Matignon, Andrea Giarola, and a veritable storm of dice.

Giarola remained as stoic as ever. He quickly cast Growth Spasm and then Heat Ray to kill the Assassin before it could get online. He held back on his Nest Invader for a turn. The Chronologist hit level 5 and charged in. Giarola tried to pick it off by blocking and casting Might of the Masses, but Vendetta cut that plan short.

Matignon may not have had a fifth land, but his Chronologist hit max level and got ready to hand out Time Warps. Giarola summoned Wildheart Invoker and Battle Rampart, but Matignon had another Vendetta to put away the Invoker. He then untapped to take the first of his two turns.

First up was See Beyond, then an attack for 3, a fifth land and a Cadaver Imp to get back Champion's Drake. His second turn he hit for 4 and brought out the Drake, this time a 4/4. Giarola had no play on his turn, and frankly when you get four turns and your opponent doesn't do anything in between, it does not go well for him. Frostwind Invoker convinced Giarola to move on to Game 2.

Giarola naturally opted to play with his aggro red-green deck, and both players mulliganed. Matignon cut down a turn-two Overgrown Battlement, then untapped and cast Null Champion. Giarola played his third land and Nest Invader. Matignon sent it back without acting; he had no third land.

Giarola swung in with his Invader and passed. Matignon's deck smartened up and gave him a third land, letting him upgrade his Null and hit for four. Giarola played his fourth land and held back on his Invader. Good thing he did, since Matignon's next play was a fourth land, then Training Grounds and supersizing the Null Champion. He sent in running into the red zone heedless of his lack of regeneration mana, and Giarola was happy to get rid of it with Nest Invader and Might of the Masses. Giarola untapped, played a Battle-Rattle Shaman and hit with his Eldrazi Spawn for 2.

Matignon got rid the Shaman with Induce Despair (showing Venerated Teacher), and played Skywatch Adept, levelling it once. Giarola tried Wildheart Invoker, but Matignon had Narcolepsy for it, along with Teacher to max out his Adept and hit for 4.

That exchange was just fine for Giarola, who tapped seven and played the honorary Eldrazi, Pelakka Wurm. Suddenly he was safely out of harm's way and bringing tremendous damage. Matignon played a 4/4 Champion's Drake and hit for 4, but Giarola had an eighth mana waiting for the Wildheart Invoker. The extra damage sent them to Game 3.

Giarola mulliganed again, and his start was short of blazing. He opened with Warmonger's Chariot, then Rage Nimbus and Vent Sentinel. Meanwhile Matignon had played Champion's Drake, See Beyond, and then a pair of Null Champions.

Matignon leveled one of the Null Champions up to a 4/2 and swung. Giarola declined to trade either his Rage Nimbus or his Vent Sentinel. He untapped and put his Sentinel on the Warmonger's Chariot, making it a big enough blocker to devour Null Champions that he could force into combat with Rage Nimbus. Matignon removed that last piece of the puzzle with Vendetta.

He untapped and played Venerated Teacher, buffing his team and turning the Drake into a 4/4. He swung overhead and passed it back to Giarola, and had Deprive ready for a second Vent Sentinel. Facing a max-level Null Champion with regeneration mana, Giarola scooped.

Giarola mulliganed for a third time, but came off the blocks fast with Nest Invader, then using its Spawn to bring out Battle-Rattle Shaman, hitting for 4 past Matignon's team of Zulaport Enforcer and Lighthouse Chronologist. Matignon didn't have the Venerated Teacher for turn three and so cast See Beyond and put a level counter on his Chronologist.

The enhanced Nest Invader hit for another 4, but Giarola had no third land. He faked one with Overgrown Battlement. Matignon continued to play it slow with another See Beyond and two more levels for his Chronologist. Giarola, now with access to four mana, spent it on Heat Ray to burn out the Lighthouse Chronologist. That cleared the path for his two creatures, and he brought Matignon down to just 6.

His back against the wall, Matignon busted out Venerated Teacher, getting his Zulaport Enforcer to 3/3, and a Narcolepsy for Overgrown Battlement to further harass Giarola's mana. Giarola gave his Battle-Rattle Shaman a Spider Umbra, boosted the Nest Invader, and swung in with both. As expected, Venerated Teacher traded with the 4/2 Nest Invader, and Zulaport Enforcer traded for the Shaman's Spider Umbra.

Matignon continued to stave off disaster, this time with Vendetta for Battle-Rattle Shaman and a Zof Shade for offense. Giarola was stymied by his three land and helpless Overgrown Battlement. Matignon swung for 2 and got back Lighthouse Chronologist with Cadaver Imp, leveling it twice. He was pulling farther and farther ahead.

Giarola drew and it still wasn't a land, but it was at least a second Nest Invader. Matignon attacked with his Zof Shade and Cadaverous Imp, pumping the Shade for extra damage, and brought his Lighthouse Chronologist to level 6. It was looking grim for Giarola.

Looks can be deceiving. On upkeep, he tapped his Battlement for mana and cast Might of the Masses on his Nest Invader, making it a 5/5. He drew for the turn and sacrificed his Spawn for the fourth mana to cast Wrap in Flames, negating the potential blockers and allowing Nest Invader to steal the win. 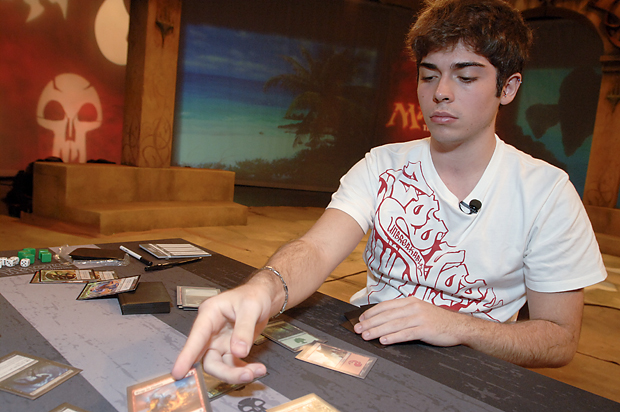 Giarola squeaks out a win with Wrap in Flames.

Giarola agonized over his opening hand, but chose to keep. They waited on the start of their final game for the cameras to move away from the other Semifinal match. Soon, Paulo Vitor Damo da Rosa brought his match against Josh Utter-Leyton to 2-1, and they were ready to begin.

Matignon opened with Null Champion. He attacked for 1 in the face of Giarola's two open lands, then played a postcombat Swamp and Lighthouse Chronologist. Giarola played a third land and passed. Matignon played a second Island and tried to level his Null Champion, but Giarola cut it down with Spawning Breath.

Giarola built up more mana with Growth Spasm, leaving him with five land and two Spawn. Matignon leveled his Lighthouse Chronologist to 4 and attacked for 2. Giarola played his sixth land and put it all into Ulamog's Crusher. Matignon happily went to 12 for Vendetta.

Now the Chronologist hit max level. Giarola hit for 3 and watched as Giarola played out Rage Nimbus and Nest Invader. Matignon untapped for the first of his turns. He played See Beyond and then his Chronologist was forced to trade with the Nimbus. He added Skywatcher Adept and Venerated Teacher, then untapped for turn two. 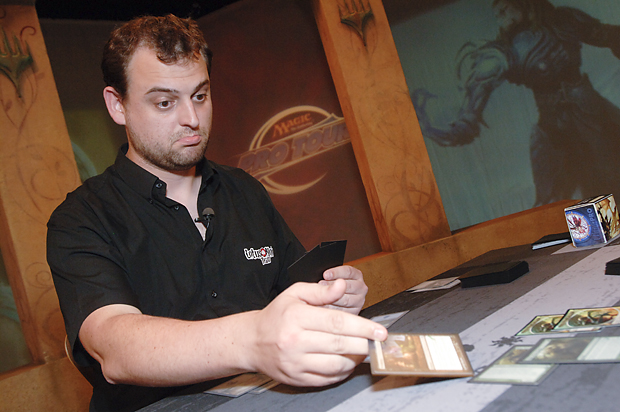 Matignon might not hold a grudge, but he always seems to have a Vendetta.

He maxed his Skywatch Adept and smashed for 4. Giarola tried a Battle-Rattle Shaman but Vendetta stopped it before he reached the attack step. Matignon's flyer dropped Giarola to 5, and he added a Zulaport Enforcer to the mix and leveled once. Giarola had the big Pelakka Wurm to change the equation. Now Matignon had to think.

After weighing all his options, he decided that he would play his eighth land, max out his Zulaport Enforcer and cross his fingers. His monsters hit Giarola for 9. Giarola drew his card, and extended the hand.

Guillaume Matignon defeats Andrea Giarola 3-2 and advances to the Finals!