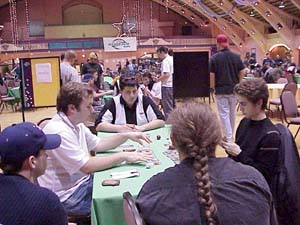 Mike Emmert vs. Jeff Cunningham In the semi-file match of Mike Emmert vs. Jeff Cunningham, it was a match of blue/white vs. red/green. Typically this match favors blue white because the defense in blue/white is good enough to withstand the early rush of red/green, and later on in the game, the card advantage and fliers of blue/white typically take over. However, this was not a typical matchup because Emmert found himself facing a terrible threat in the bomb squad. Without Psionic gift, blue/white has a very difficult time getting rid of this threat. The bomb squad can single-handedly mow down the entire white/blue army. If you don't have the Psionic gift there are some ways to still pray for a win, such as bouncing the creature and then counterspelling it, or relying on protection from red creatures. In Emmert's case only the two resilient wanderers would be able to gain protection from red.

There is one trick that you can use with the bomb squad that is nice to remember. In the upkeep you put the bomb squad effect on the stack. Then you respond, tapping the bomb squad adding a counter. When you do this to a creature with no counters, it will get two instead of just the single one you would get if you waited to put the counter on in the main phase.

Before the game, Mike and Jeff chatted easily and relaxed, with Mike beaming a big smile. Peter Szigeti (a fellow Magic Colonist) walked by wishing Jeff good luck before running off to get dinner. The crowd gathered around this match was rather small, since nearly everyone else was watching the Malka-Kennison match, in fact, the single spectator watching this Emmert-Cunningham match was Emmert's brother.

Mike lost the roll, and Jeff led off with a quick turn two Seton's Scout, and a Peek by Mike revealed only 3 business spells versus 5 lands that Jeff had, counting both those played and in hand. If Jeff drew more land this could lead to a bad mana flood. Jeff needed to draw more spells to get an offense going.

The smile on Mike's face was all gone, this was business now.

When on turn 4 Mike played his resilient wanderer, it looked pretty bad for Jeff. Jeff attacked into it and refreshed the blocked creature, dealing 2 points with a Leaf Dancer. A few turns later, Jeff still hadn't drawn the spells he needed, and the board showed a Dreamwinder, Resilient Wanderer and Teroh's Faithful staring at a Leaf Dancer and a Seton's Scout. Mike licked his lips and began attacking for two with his wanderer. Jeff's life total went down by two's until it stood at 16 life to 8 in Mike's favor, as Jeff had still not been able to break through at all, while the creature count stood in Mike's favor 5 to 3. A turn before Mike would kill Jeff, Jeff tapped all his creatures to attack, and then quickly scooped when Mike remembered to block. 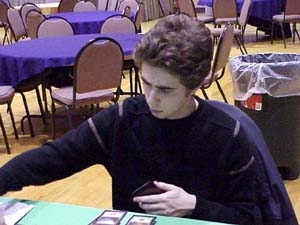 Jeff CunninghamJust then an announcement came over the loudspeaker "While they last, hot dogs are $1 at the concession stand." A thundering herd of gamers stomped over to the concession stand and I noticed that the Malka-Kennison match had lost half of its spectators.

Perhaps the quest to turn this game we all love, Magic the Gathering, into not only an event for gamers to play, but also one to watch, could be achieved with the dollar hot dog.

Jeff began desleeving his deck. "These are bad luck."

Taking off the sleeves apparently helped as Jeff lead with a Werebear turn two and then the dreaded bomb squad turn 3.

Mike couldn't believe it. "I take damage from it, it's so stupid."

Mike took a turn, let Jeff untap and then couldn't take it anymore, as he scooped all his cards away in a concession, and he smiled as he muttered "Third turn bomb squad."

Strategically this might have been a mistake because it gave Jeff the information that Mike had no answer to bomb squad, in particular he's practically admitting to Jeff that Mike has no Psionic gift. On the other hand, there is nothing quite so demoralizing as playing out a game in which you have absolutely no hope of winning, and being demoralized or in a bad mood is a good way to make mistakes. 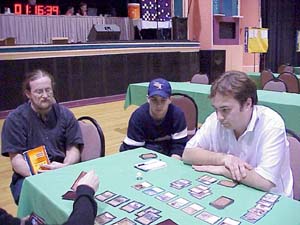 Mike EmmertMike led off with tireless tribe, and once again Jeff came out of the gates slow doing nothing on turn 3, however when Mike peeked, he found an unpleasant surprise as bomb squad was in Jeff's hand.

Over the next few turns Mike played out all the creatures he could and attacked aggressively, while Jeff was content to sit on his bomb squad making counters and blocking with his Krosan archer.

With Mike having a mystic zealot, cloud chaser, Millikin, Cephalid sage, and the tireless tribe fighting a bomb squad and Krosan archer, with the life score at 20 to 6 in Mike's favor it might seem like Mike had a chance. However, the tireless tribe had 3 counters, the mystic zealot had 3 counters, while the Cephalid sage held 2 counters. A bit later, the life score stood at 4 for Mike vs. 6 for Jeff as Mike's creatures blew up. Jeff then threw some fire he had been holding back at Mike's head for the win.