As was predicted, Walls easily went through Turian's red/green deck in three games, while Berkowitz smashed through Reeves' Upheaval/Infestation deck. Many have Walls pegged as having "two byes" in the Top 8, as his Slide deck is exceptionally good against the red/green deck he faced first round, and the second one he was heavily favored to face in this round.

Berkowitz started with Llanowar Elves, and followed up with Wild Mongrel and Grim Lavamancer. Elephant Guide went on the Lavamancer, and it attacked along with the Mongrel to deal six damage.

Walls, after drawing- "Dear God, this matchup is good."
Berkowitz- "For you, or me?"
Walls- "Me, but I just messed up. That means I should win, right? That's the way it works."

The Mongrel attacked with the Lavamancer, and Violent Eruption was pitched and cast to deal even more damage to Walls, who cast Renewed Faith to stay alive. On the next attack Walls cast another Renewed Faith, but this time Berkowitz had Volcanic Hammer to put Walls away.

Berkowitz - "All the good players are out already. If you take any three of us left, we can't win."
Walls- "Dirk and two guys can beat us."

It's worth noting that during this game and all through the match, there was plenty of trash talk by both players. I didn't bother to try and keep up, but just mix and match "No sir!", "Yeuussss!", "Sack" and "Nut low" over and over again in a high pitched voice in your head, and that should pretty much cover it. 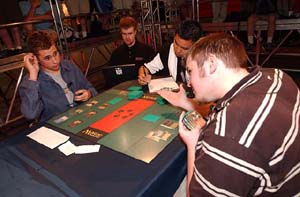 Berkowitz mulliganed down to six, and had a first turn Llanowar Elves. It attacked for a point, and Berkowitz dropped Wild Mongrel. Walls untapped and went for it, playing Exalted Angel face down, leaving it open to burn. Berkowitz didn't have any, and played another Elves along with a face down Blistering Firecat. Walls played a fourth land and ended his turn, staying back on the Angel to block. Berkowitz attacked with everything but the Firecat- the Angel blocked an elf, and Wild Mongrel was pumped with Violent Eruption, which dealt the other four necessary to take out the Angel. Another attack saw Walls cycle Slice and Dice so that the Firecat couldn't be unmorphed, and Walls cast Wrath of God to kill the Mongrel and Firecat.

Once six mana was reached, Exalted Angel came out face up, and Walls played Astral Slide. Berkowitz was out of threats, and the match was tied at one game each. 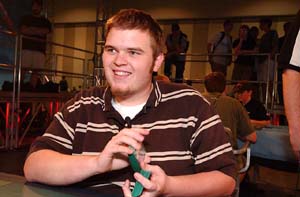 Berkowitz- "Could you possibly mulligan, you lucky, lucky, lucky..."
Walls- "My deck has like, forty lands! Besides, you're pretty lucky, you drew that Violent Eruption."
Berkowitz- "Yeah, and you walked right into it."
Walls- "What do you mean?"
Berkowitz - "Why else would I have attacked with my Elves?"
Walls- "I don't know, you're an idiot."

Berkowitz had a Mongrel and a third turn Llanowar Elves.

Berkowitz- "I can't believe this guy is going to be the National champion. Look at him, he's a disgrace!"

A cycled Slice and Dice killed off both of Berkowitz's creatures, and he came back with Phantom Centaur. Walls summoned Teroh's Faithful, and Berkowitz had a second Centaur. The Faithful chump blocked a Centaur, and Walls went to eight. Firebolt brought him down to six, and Nantuko Monastery became active with threshold, blocking a Centaur on Berkowitz's next attack. Renewed Faith was cast to keep Walls alive, and he untapped, then played Wrath of God.

Berkowitz - "Did you just draw that?"
Walls- "Yeah, I think I messed up, but I drew Wrath so it really doesn't matter."

Berkowitz didn't seem very happy with this turn of events, and slumped in his chair while shaking his head. He told Walls how lucky he was many times, before Exalted Angel came out and finished it.

Berkowitz- "That was the most frustrating thing I've ever experienced in my entire life. I played perfectly, and you ripped a Wrath. You're such a buffoon." 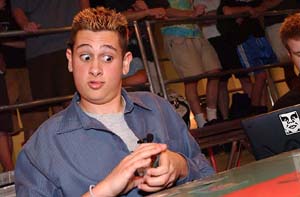 Walls seemed to revel in frustrating Berkowitz, playing the "I'm so terrible, but I beat you anyway" act to further antagonize him.

Berkowitz made a second turn Mongrel, which attacked on the following turn as Volcanic Hammer dealt another three damage. Berkowitz missed his third land drop, and didn't seem happy at all while Walls played Astral Slide.

Walls- "Just play the land. Why are you slow rolling me?"
Berkowitz- "SHUT UP!"

Berkowitz drew and started thinking as Walls smiled and laughed, looking him right in the eyes. Three Flaring Pains were pitched to the Mongrel, as Walls' smile turned into howls of laughter.

Walls played Teroh's Faithful, as Berkowitz told spotter Ken Krouner to let the commentators know that he lost. He played Call of the Herd, and sat back in his chair, staring at Walls with a look of disdain. Walls only seemed to revel in this, and played Exalted Angel, which finished up the match and sent him to the finals.