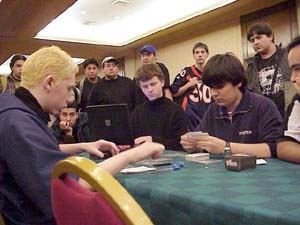 Jose Luis Echeverria, who got third in 2001 Chile national, and winner of several Grand Prix Trials, is facing the best positioned Argentinean in the tournament, Matias Gabrenja. Matias U-G-r aggro deck will be fighting with another U-G-r in a very interesting mirror match.

Matias started by playing a Kavu Titan and Jose, instead of playing a creature tried to stop Matias's weenies horde by tapping his Shivan Oasis with an Ice as well as looking for a red mana source. Matias drew a forest and played a Blurred Mongoose.

Juan, still without red played a Mongoose which blocked Matias's but Matias kept playing creatures with another Mongoose. Juan tapped two more times with another two Ice but still didn't found his red mana, but Matias Countered one with a Mystic Snake, and then played his third Blurred Mongoose. Trying to stop the horde, Echeverria played a Gaea's Skyfolk followed by a kicked Kavu Titan. Finally, when game got stuck, Echeverria found his red mana with a Shivan Oasis. It was then that Matias tried to tap the Kavu with an Ice but a Mystic Snake from Juan didn't let him.

Now, with red mana available, Juan played an Urza's Rage on Matias's Kavu Titan and he responded with a Prophetic Bolt which gave him another Bolt. Even if the table was favorable for Echeverria, he still didn't attacked because he was at five.

Echeverria played another Bolt, now to the Snake, to which Matias responded by a Bolt to Juan. Echeverria tried to counter it with his Snake but Matias one finished the job.

After a lot of turns, Juan started the war when he attacked but in the next turn, a kicked Urza's Rage finished him.

Juan started the game playing a Kavu Titan which got killed next turn by Matias's Fire. Then he played a Blurred Mongoose. Matias, without any creature in hand played a Fact or Fiction to look for any of his bears.

He found a Gaea's Skyfolk but it got killed by an Urza's Rage. Another Fact or Fiction came from Matias Hand, giving him, this time a Blurred Mongoose. Even with a blocker on the other side, Juan attacked and traded with Matias Mongoose. A third Fact or Fiction was played by Matias ant it gave him two Mongooses more, leaving an Skyfolk, a Snake and a Yavimaya Coast. Juan tapped two mana for Gaea's Skyfolk leaving him with three mana. Matias played a Jungle Barrier to make some bluffing. Juan countered it and Matias played a Kavu Titan with Kicker, followed by another one in the next turn. Trying to get safe from the horde, Echeverria played a Repulse on Matias's Kavu, a Snake from Gabrenja appeared but it got Excluded. Then Matias played a Fire on the Skyfolk and attacked for the victory.