Josh Rider is trying his best not to let his success get the better of him. All weekend he's looked nothing but baffled at the match wins he kept racking up, and now that he's sitting in the semifinals he's pretty sure the whole thing is some kind of practical joke. Richard Hoaen also thought he wasn't going to be playing on Sunday, after drafting what he called The Worst Deck Ever and then losing his standard deck. He chose to drop rather than play out the last round. Ryan Fuller and David Rood convinced him to undrop, offering to lend him a copy of the deck. Then some chicanery happened, where he was left off the pairings and emergency paired against a four-point player, Adam Whitehead. He couldn't even beat him, but since Whitehead was out of contention anyways, he conceded the match to Hoaen. Not only that, but he even found his deck at the lost and found. It must have been fate. The matchup is Hoaen's Psychatog against Rider's black-green Cemetery. 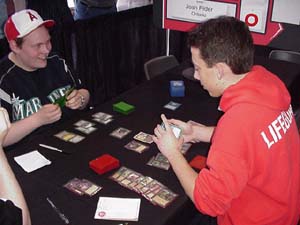 Rider's lack of mulligans came back to haunt him as he was forced to go down to five cards. Hoaen jokingly reached to increment his game count. An early Cabal Therapy from Rider for Counterspells missed, but saw that Hoaen had a pair of Concentrates, Psychatog and Smother in hand. Two turns later, Rider played a mainphase Caller of the Claw. Hoaen moved to Smother.

"You, my friend, are jumping the gun" – Josh Rider

He flashed back his Therapy and hit the Concentrates. Hoaen put out his Psychatog. Rider needed a swamp rip to put it under his Butcher, but found none. Hoaen hit and played his fourth land. Rider found a forest, and tried Phantom Centaur, reaching for coins from his pocket.

Hoaen fetched the Logic from his board and shut down the Centaur. Finally Rider got the swamp for his Butcher. Hoaen made no play. Rider got in with a Herald. Hoaen played his sixth land and went for the throat with Upheaval. Rider floated two mana, and Hoaen's face fell. Rider showed him the Smother. Rider replayed his Herald and it was Smothered, giving him another Herald.

"So we're at card parity after I double-mulliganed? That's certainly something." – Josh Rider

Hoaen played a land and passed. Rider Therapied him for Counterspell, missed, but saw Concentrate, Psychatog, Innocent Blood and Smother. He immediately sacrificed his Herald to steal the Concentrate, but forgot to search for another. He shook his head at his mistake. Hoaen made no play. Rider made Stronghold Assassin. Hoaen dug for more action with Deep Analysis. Rider hit and made a Herald. 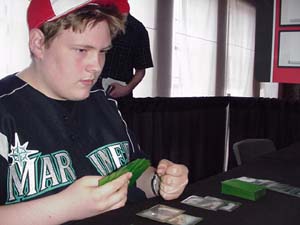 Finally Hoaen was moved to action. He spent his Blood and dropped Psychatog. Rider tried Faceless Butcher, but Hoaen had the Circular Logic. The next turn Rider tried again, but this time Butcher fell to Counterspell, and Living Wish to Circular Logic, leaving him empty-handed.

Hoaen Smothered the Assassin and started swinging. Rider found an Elf for insurance before the Psychatog would be lethal, and then managed to resolve Oversold Cemetery. He got back his Phantom Centaur, which also resolved. He waited a couple of turns before daring to swing, so he'd have a few more blockers and a Caller in hand. Finally he swung. Hoaen smiled and nudged his Psychatog to block.

"That may work in round two." – Josh Rider

"I assure you it didn't. He had Wonder in the graveyard." - Richard Hoaen

Hoaen fell to four and got one more draw. He flipped it over for all to see. It was not Upheaval.

Even with the boisterous "ScrubbyZ" in the house, it was all business for Game 2. Rider aimed for Counterspell with Cabal Therapy, and hit, seeing Concentrate and Deep Analysis. Rider spent his second turn searching for City of Brass with Living Wish, and on his third tried for Llanowar Elf. Hoaen had Counterspell.

He eagerly tapped out for Concentrate, and Rider came back at him with Braids, Cabal Minion. Hoaen sacrificed a land, played another and Deep Analysis. Rider sacrificed a land and played out Herald and Birds of Paradise. Hoaen put a Plague on Birds, while Rider's Herald took one for the team and got a friend. Hoaen kept drawing cards, managing to keep pace.

The big move was when Hoaen resolved Zombie Infestation with a grip of six. It broke Braids's hold, especially after he pitched two Deep Analyses. Rider had the Ray of Revelation to cut it down, but the two Zombies Hoaen made gave him room to maneuver. He had a counterspell for Caller of the Claw. He tried Upheaval, but had to give Rider the first land drop.

He had Force Spike ready for Oversold Cemetery, but Braids resolved. Hoaen lost a land and Blooded it away. He followed up with Psychatog. Rider was shocked to find Phantom Centaur waiting at the top of his library.

Rider tried another Centaur, but Hoaen had the Logic. That was okay, though, because Rider had the Smother. 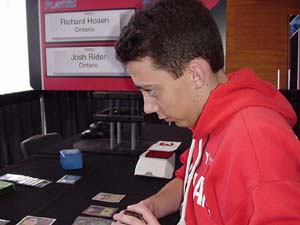 "Who's the loser match?" – Elijah Pollock

Hoaen's promise that he would "get creative" came to fruition with a first-turn Duress. It snagged an Oversold Cemetery. He saw that Rider's hand was Phantom Centaur, Braids, Baloth, Caller of the Claw and two land. Unfortunately, Rider's draw step yielded a Smother, so when Hoaen went for Psychatog he was disappointed.

Rider untapped and Therapied for Counterspells, and scored. He noted a pair of Logics and Upheaval in Hoaen's hand. Hoaen played his third land and was done. Rider did the same. Hoaen missed his third land drop, and passed the turn. Rider tried an end-of-turn Caller of the Claw, which Hoaen Ghastly Demised. Unfortunately for him, Rider pulled up land number four, and threw down Phantom Centaur.

Hoaen took the beats and hoped to draw an answer. His Logics took down Braids and Baloth, but the 5/3 monster was unstoppable, and he soon succumbed.