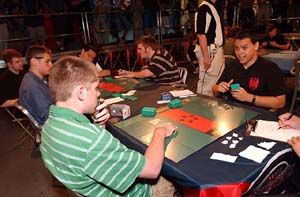 Six years ago relative unknown Justin Gary sat down to face Jon Finkel in the Top 8 of 1997 US Nationals. It was widely assumed that Jon would win and take the title but Justin had something to say about that and emerged as the unlikely champion. Justin is the favorite over this year's relatively unknown Joshua Wagener but he--more than anyone--knows that that he needs to be wary of having his opportunity at a second crown hijacked by the upstart from Maryland.

Joshua is by all accounts a less serious player than your average Pro. His Red-Green Beats deck is different than most in this tournament. Instead of Elephant Guides he is running Reckless Charge and almost couldn't play with the deck at all. "Is it true you don't have Guides because you couldn't find any?" asked his opponent.

"Sort of. My buddy borrowed my deck for the last Grinder and left without giving me my deck back. I had to run around to the JSS kids to get whatever cards I could find to build it last minute. I was pretty mad, I almost had to settle for Wake."

Justin agonized over his mulligan decision. When a nearby cell phone rang, he kiddingly hoped it was someone calling with advice. That drew a laugh from the audience. Realizing he was miked for the coverage, Justin played to the crowd, "CAN someone call me and tell me what to do?"

Eventually he shipped it back but apparently the next six were worse than the first seven and he went back to the well again and kept his third attempt at a hand. Any hand that leads with SwampDuress can't be all bad and he took a Reckless Charge over Firebolt and Volcanic Hammer—Phantom Centaur and Basking Rootwalla were unscathed.

When Josh led his turn with the Rootwalla it was dispatched with an Edict and Justin had to admit, "For five cards we're doing okay so far." He was rooting for; "No guy!" on Josh's turn but after it looked like he was getting his wish the Maryland player had the Mongrel. "Unnnggggh!"

Joshua and Justin had played yesterday and apparently the dramatics were payback, "Remember the slow roll on the Corrupt, yesterday?"

"Hey! I was tutoring, I had to think," Justin protested but his grin told the truth. When the feature match rookie merely tapped his attackers, the savvy veteran corrected him, "We're on camera—you need to use the red zone." He pulled his opponents into the appropriate portion of the playmat. Joshua thanked him with a Firebolt to the nugget.

Justin's good draw was petering away. He thought about cycling the Gladiator but instead played it and missed his fourth land drop. Joshua shrugged and played his Phantom Centaur. Duress stripped away the Volcanic Hammer but he was holding another Firebolt for the Gladiator. He flashed the Reckless Charge back and Justin plummeted to six.

Justin's next turn did yield the fourth Swamp but he did not have the much-needed Mutilate. A round of applause pleased and startled Josh, "Hey I have some fans too."

Joshua sided in four Composts for Game 2 and struggled to take out cards. "I honestly have no idea how this match-up works. I was soooooo hoping for Zombies. All I know is I want two more games of you stuck on three lands."

Justin had no plays for the first two turns and his opponent got down a Llanowar Elf and a Compost before he could do anything but cycle a Gladiator in response. Justin Duressed but only saw three lands and a Phantom Centaur, "Great, I'll discard a card to give you a free card." 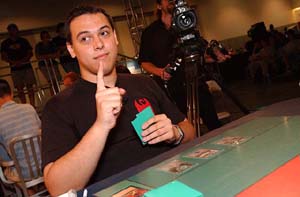 Joshua was able to play a Call of the Herd and flash it back. All Justin could do was Corrupt one of the tokens. He had no action in his hand but kept Josh form putting down the Phantom Centaur with bluffery. Josh didn't mind, "I am fine with four power on the board against the control deck."

Justin played a Replicator that would be making 4/4 green wolves. Josh got in with the Call token and played out his Centaur and a Wild Mongrel. He braced for the Mutilate, "Now who's slow-rolling?" But Justin could only muster, "Your turn." Josh bashed him down to one on the next turn but he did not have the burn to finish him off.

Justin crept back up to seven thanks to a Corrupt on the Wild Mongrel and fell back to one on the next attack step and looked like he might stabilize there after playing a Visara. Josh flipped over the Firebolt off the top of his deck and he was a game away from the upset.

Justin was down two games to one it was looking like he would have to make the National team in the 3/ 4 playoff. "I'm gonna be honest with you. If you beat me, I don't think you will be the Champion. If I come back and beat you however..."

Justin opened with a second turn Duress and took Violent Eruption over Firebolt and then Innocent Blooded away Josh's first turn elf but he had another for turn two. When he ripped the turn three Centaur Justin just nodded, "Like a champ!" When he didn't find a fourth land he sighed, "I however don't seem to have it in me." Joshua bashed him down to fourteen but the fourth land was there for Justin and so was the Mutilate, "Later gentlemen."

Josh had the second Phantom but Justin tutored for Blood and sent it to the bin. Josh had much land and played a Call and flashed it back. Justin Smothered them both, "Two for one—I'm sure you're upset."

Both players said, "Go" for a number of turns. A Engineered Plague killed Josh's Roottwalla and Josh killed his own Grim Lavamancer with Violent Eruption when Justin tried to Corrupt it but that cleared the decks for Visara. A Hammer and a Bolt killed the gorgon but that finished off Josh's hand. Cabal Coffers and Nantuko Shade closed the deal and Justin had the first game of his comeback under his belt. 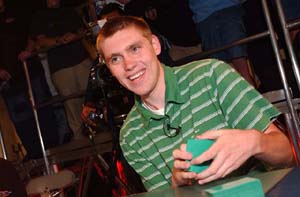 Josh kept his solid hand while Justin once again had some thinking to do. His hand had a Swamp and a Cabal Coffers along with two Engineered Plagues, Nantuko Shade, Diabolic Tutor and Mutilate. Finally he decided...

Justin ripped the Swamp but had nothing to stop Josh's Rootwalla from getting in for three. The next turn saw a Compost hit play and Reckless Charge consumed another four points of the YMGers life. He shut the lizard down with a Plague but Call of the Herd came down next. Justin's fourth land was the Coffers and he tutored for a card and gave Josh a card.

Josh played a Grim Lavamancer and flashed back the first of his Calls. Another Plague killed the wizard and an Edict dealt with the token but Josh was drawing infinite cards. He was holding two Violent Eruptions and Justin could not extricate himself out from under the ridiculous power of Compost.

Josh's supporters wanted him to slow-roll the Violent Eruptions but another spectator pointed out, "He just wanted to win as soon as possible."