Yup, two Nordic players playing in an Euros' semifinals. Surprising isn't it? Not really. They know each other quite well and had no qualms discussing their options before the game started. They certainly had enough jokes to tell. 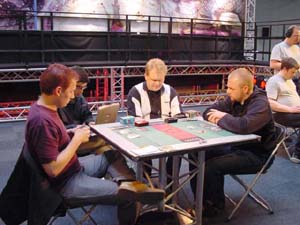 Jussi: "This is the kind of mood I like when I'm playing for this amount of money."

Herzog was not happy with his hand, but after some headshaking he decided to keep it. Jussi got a peek with Duress taking Circular Logic and seeing another Logic and Aquamoeba.

Aquamoeba entered play and when Salovaara tried to Edict away the Norwegian showed him his topdecked Rootwalla. The Beast stayed and attacked the next turn.

Mesmeric Fiend got hit with other Logic and Nicolai attacked discarding Roar of the Wurm. He flashed it back.

Jussi's freshly-cast Nantuko Shade looked quite small across the table but it kept Aquamoeba back. The Roar brought him crashing down to eight. The purpled haired player played a fourth Swamp and sat behind his Shade.

But Nicolai was in a hurry. An Unsummon got the blocker out of the way and the Roar-Moeba duo finished the game.

Jussi: "Why do you Norwegians keep playing Blue-Green?"
Nicolai: "It's just the best deck."
Jussi: "It might be the worst best deck ever."
Nicolai: "Well, it CAN be inconsistent."

Jussi: "This is a good hand."
Nicolai: "I think Rune would keep this hand. I'll mulligan."

He kept his second hand and Salovaara played Cabal Therapy.

Jussi: "I'll go for Compost."
Nicolai: "You should have gone for Wild Mongrel. I do have two of those."

The Finnish player followed that with Wretch and Smother on the first Mongrel. Herzog played Aquamoeba with an Island open but Jussi called his bluff. As you all know Herzog doesn't have any Logics now, so Butcher took Aquamoeba.

A second Aquamoeba and the second Mongrel entered the game and Jussi Salovaara was forced to stop swinging. Instead he played out his second Wretch and Nantuko Shade.

Herzog used Careful Study to find help and discarded two lands. The Shade pushed him down to eight points. Nicolai played a sixth land and showed the last card in his hand: Upheaval. Things were back to square zero.

Well, almost. The Aquamoeba was released from Butcher and thus stayed on the table. Two turns later the Shade returned. Nicolai played Mongrel with four cards in hand and Jussi took a few minutes to work out his new plan.

He stared at Herzog for a few seconds and sent the Shade in. The Mongrel stepped forward and they traded Black mana for cards. In the end both creatures died. In came another Wild Mongrel but Faceless Butcher took it away.

The Aquamoeba brought Salovaara down to twelve and Herzog again dropped the elbow with his last card in hand. This time it was Phantom Centaur.

Jussi was NOT happy about that. A second Faceless Butcher took care of the Aquamoeba but Herzog topdecked another one to keep the Centaur save from any Edicts.

At seven, Jussi tried to swarm Herzog. He played two Nantuko Shades, signaling that Nicolai Herzog couldn't swing with his Centaur unless he could find another chump-blocker. And even then he would be taking a huge risk (Butcher or Edict could cost him the game).

He couldn't, so he sent the turn over. Jussi again slumped back in his chair and stared at his cards. The game situation was quite tense and the difference between 0-2 and 1-1 is so huge in a five-game match. He settled for playing Wretch and sending his whole team in. (pumping both Shades once).

Herzog's creatures stopped the Shades and the two Butchers brought Herzog to two. Again Herzog found no help. He passed the turn back and scooped when Jussi Salovaara pushed the whole army into the Red Zone.

Jussi: " I almost messed that up." 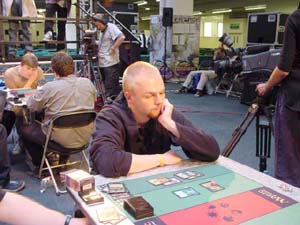 No sideboard changes, although Salovaara pushed the whole sideboard into the deck before taking out exactly the same fifteen cards.

First turn Rootwalla and Jussi Therapied for Compost again. Again he missed. Mongrel joined the fray on the second turn. Salovaara had no turn two play so the Norwegian discarded another Rootwalla and attacked.

When the Fin finally moved it hurt: Engineered Plague on Lizard. Out went the two Basking Rootwallas. Herzog discarded Upheaval to Careful Study and kept attacking with Wild Mongrel. Salovaara's Butcher took the lone creature away.

Nicolai: "This game took a turn for the worst."

Another Careful Study gave Nicolai Herzog some help in the shape of Compost. But Jussi likes extra cards as well, so he played Graveborn Muse. Edict got an Aquamoeba out of the way and Herzog went down to thirteen.

He played a second Compost and Wild Mongrel. But Jussi Salovaara was in a hurry. His Muse was eating his life total. He flashed back the Edict and dropped his opponent to eight.

Still, Nicolai found Phantom Centaur. That can certainly slow down Black creatures. Of course Jussi was drawing like a madman and had Edict. An Unsummon released the Mongrel, which traded with the Muse.

Herzog kept fighting back but Salovaara's hand was just scary. He played Visara that Herzog bounced. A first Corrupt left him at one and the second one finished the job.

This time Jussi changed a card. He took out a third Duress and added Unholy Grotto.

Nicolai called his hand "interesting" which turned out to be just another word for mulligan. He peeked at the top cards and found out he should have kept the hand. His six-card hand seemed good enough.

He played Careful Study. Whatever he drew it sure made him think. He eventually settled on discarding an Island and Basking Rootwalla. The second turn Wild Mongrel got Smothered before it could do anything.

Yup, another Careful Study, this time discarding Careful Study and Aquamoeba. The Rootwalla was soon outmatched by Nantuko Shade. To compensate for it Nicolai Herzog dropped Phantom Centaur drawing a collective sigh from the crowd.

Faceless Butcher stole Basking Rootwalla and the Centaur attacked while Aquamoeba kept it safe from Edicts. A second Butcher stole the blue Beast and Salovaara tried to race.

Arrogant Wurm entered game with obvious "Edict-Protection" duties and Salovaara shook his head. He was one swing away from losing the game and eight point behind on the damage race. He did the math a couple of times and conceded.

Nicolai's sideboard:
In: One Roar of the Wurm.
Out: One Ray of Revelation.

Going into the decisive match Jussi Salovaara wasn't too happy. He clearly didn't enjoy getting bashed in by Phantom Centaur. Nicolai, on the other hand, seemed very relieved.

Jussi: "Why are we shuffling in silence?"

And... they spent the rest of the time discussing in which restaurant they would have dinner tonight.

Nicolai nodded over his seven cards before deciding to keep it. He did get the first play in and it was quite good: Compost. 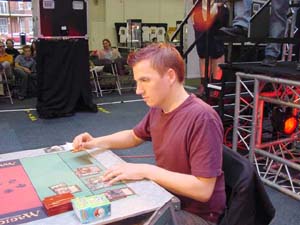 Nicolai: "It was a calculated risk."
Jussi & Nicolai: "Sooooooo... lucky!"

He followed that with Aquamoeba as Salovaara played Swamp after Swamp. He agonized over Cabal Therapy for a few seconds, with several deep sighs and a lot of shuffling around in his chair. He started Smothered the Aquamoeba to start things and then unleashed Cabal Therapy.

He got two of them and the crowd reacted loudly. Ravenous Baloth joined Basking Rootwalla but Faceless Butcher immediately showed up to push it out of table. Nicolai needed some extra help so he used Deep Analysis to draw two cards. A Careful Study helped as well.

Graveborn Muse entered the game and it seemed that despite the pending threat of Compost Jussi was taking control. Deep Analysis got flashed back but all Nicolai Herzog could find was another Compost.

A second Butcher tried to take the Rootwalla out of the way but Herzog had Counterspell. He got two extra cards but the attack dropped him to six. He untapped, attacked and hit the safety button: Upheaval.

Salovaara returned the Baloth, smiled and picked up his cards. At sixteen he had some breathing room to work with but he was surely in trouble. Nicolai's discard step got two Basking Rootwallas into play and Jussi gave him a "high five".

The game was as good as over. Salovaara played a Swamp and sank to ten, now facing Aquamoeba as well. When your only permanents are two Swamps there isn't much you can do. A Smother kept him alive one more turn but he was forced to concede.

Nicolai Herzog will now play Pierre Malherbaud - who defeated Sigurd Eskeland in their semifinals – in the Euro 2003 finals.