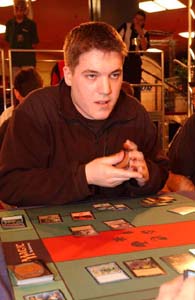 Well, it didn't take long for the banter to start trading back and forth. Andy Johnson has always provided confidence and bravado in abundance, while Kai Budde has a rep to protect, and these two are very familiar with one another. With both players suggesting they had a 60% chance at victory, they had a basis for those respective beliefs in familiarity with one another's games, with Kai beating Andy in limited at Worlds, and drew unintentionally at GP Columbus before Kai's team defeated CAT there, and the two split two matches at Andy's house in Pittsburgh when the German and his teammates visited on the way to the GP. They shook hands, felt confident in their seven opening cards and began the match.

Kai's precarious mana base, with one each of Mountain, Swamp and Plains, seems to be at the center of this match up. With only a Primal Growth and Quirion Sentinel as mana diversification, he still decided to splash Agonizing Demise, Pernicious Deed, Obsidian Acolyte and a couple more cards in his otherwise green-blue deck. Kai would suggest that the Growth is the most important card in his deck, and in game 1, he drew it along with a Forest and his one Mountain, suggesting good things to come.

Kai drew his third land on turn 2, and Island, insuring he'd be able to get all five land types in play in a hurry, while Andy's first play was a third turn Stormscape Familiar. Kai's third turn was far more explosive, with a kicked Primal Growth giving him all five basic land types. Turn four saw Kavu Howler send Kavu Climber to Budde's hand, and despite Andy having Agonizing Demise for the Kavu, he couldn't be feeling confident about his chances this game, especially when he passed yet another turn without casting anything with four lands in play.

Kai's fifth turn saw him cast Kavu Climber, and after Andy cast Sea Snidd, Kai Demised with kicker and attacked for three taking the life totals to 13-15. "Did you really think I'd get mana screwed on Sunday?" asked Kai as Andy played Marsh Crocodile. Kai responded by tapping all seven lands, casting Pernicious Deed and activating it for four, killing Andy's two creatures and allowing an attack. Andy cast Urborg Uprising for some card advantage, but Kai had some of his own, casting Allied Strategies for five cards amidst a lot of head shaking from the gallery in wonderment.

Andy played the Familiar and the Crocodile again, with the recently cast Amphibious Kavu taking Johnson to five. Kai cast Minataur Illusionist and Gaea's Skyfolk. Andy thought long and hard about finding a way out, finally casting Rushing River then hunting Drake. Unfortunately, the German Juggernaut was ready, killing the Drake and bouncing the Crocodile with Jilt, and after the Skyfolk had taken Andy to three, the Houston, Texas native conceded.

Knowing about Kai's weak mana base, Andy elected to draw first in game two. Kai's opening hand included Primal Growth again, but this time had only one land and he was forced to mulligan. If Andy had chosen to play, Kai may have been able to keep the hand, so his decision was definitely validated.

Kai's six-card hand was better and after he decided to keep, saying "I guess I'll have to keep this." Andy looked at his seven, smiled and said 'I guess I'll have to keep this too," dripping in sarcasm. Andy burst out of the gates with a second turn Nightscape Familiar and third turn Coastal Drake/Worldly Counsel. Kai was forced to Probe without kicker on his fourth turn, but with a number of splash card in hand was falling too far behind, as Andy cast Phyrexian Infiltrator and Stormscape Familiar on turn four. Kai cast Minataur Illusionist, tempting Johnson to use the Infiltrator while he was tapped out, but Andy declined, opting to attack with his fliers, taking to Kai to 13 and then casting Sea Snidd.

Kai's turn saw his draw his vaunted Primal Growth, but with four land types already in play, he cast it without the kicker, searching a Swamp out of his library. "I might have been a little worried if you'd left some green open" said Johnson, but Kai could only shrug and end his turn. Johnson attacked for three again, choosing to not cast spells, with the Snidd changing Kai's Swamp to an Island during Budde's upkeep. Kai said "go," taking three damage from the fliers, but the end of the turn saw the Illusionist kill the Snidd, followed by Kai's untapping to cast Pernicious Deed, which activated during Andy's upkeep. Andy responded by regenerating his Nightscape Familiar and casting Rushing River on the Drake and the Infiltrator. Kai's next turn saw him Demise the Coastal Drake and cast Ceta Disciple and Gaea's Skyfolk, but Andy had apparently been holding back also, casting a kicked Faerie Squadron. 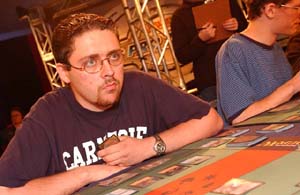 Kai's next turn saw Kai cast Stone Kavu, but with the Infiltrator having gone unchecked until now, Andy was ready to go in for the kill. The black 2/2 traded teams with the Gaea's Skyfolk, allowing the Squad to attack safely, taking Kai to four. The Kavu and Infiltrator attacked back, taking Johnson to thirteen, after which Alpha Kavu joined the fray. Andy's next attack was pointless though, showing Kai a Soul Burn. The Juggernaut conceded.

With Kai again choosing to draw first, the two combatants shook hands and wished one another luck and began, with Johnson casting an unopposed second turn Stormscape Familiar. Kai found the answer to the pesky flyer on turn three in the form of Pincer Spider, but Andy's acceleration was in effect, casting Nightscape Familiar and Phrexian Infiltrator on turn four.

Andy's fifth turn saw him try to cast Faerie Squadron, but Kai was ready with Gainsay, which he followed with Temporal Spring on the Infiltrator. Johnson attacked for two and recast it, but now Kai had drawn the all-important fifth land, allowing him to start casting the three 5 casting cost green creatures he'd had since his opening hand. Kai cast Kavu Climber, drew his card and said go.

Noting that Kai had only drawn Islands and Forests, Johnson started trash talking, noting "not getting mana screwed in Top 8, huh?" With five cards in hand, Kai took a long time to consider his options before deciding to cast Ceta Disciple Stone Kavu. Unfortunately, Andy had Hunting Drake ready and waiting, and after it died to Sunscape Battlemage, the Mage was removed by Washout and the game was Johnson's.