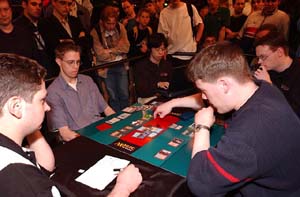 Kai Budde is the German superstar who has won pretty much everything more times than anyone else. A Masters individual title still eludes him although he has won the Team event with Dirk Baberowski and Marco Blume. Alexander Witt is one of many strong Dutch players. He wasn't actually qualified for the Masters and instead had to grind his way through the Gateway.

This matchup is really bad for Budde as Super-gro has so much disruption to prevent his Illusions-Donate combo from going off.

It didn't help that Budde started with a Mulligan. The deck still kept roughly to the plan as he Merchant Scrolled for an Intuition.

Witt's deck had a simpler plan: make Winter Orb. He didn't even have to fight to get it on the table on turn 2.

Both players steadily untapped their land before Witt started some kind of clock as he summoned a Meddling Mage (Intuition). He should have probably named Fire/Ice as Budde had two and Witt only one Force of Will to protect the Mage.

The creatures were coming for Witt now as a Quirion Dryad was followed by a second Meddling Mage (Powder Keg). An odd choice considering Budde doesn't have any in his main deck and the players had seen each other's deck lists. One of the Dutch players explained that Witt had only playtested against the sideboarded version and was still following that frame of thinking.

Budde made a Sapphire Medallion and steadily built up untapped lands, patiently waiting for the right moment as Witt bashed at his life total. Witt summoned a couple of Werebears and then Budde started to make a move.

He Capsized the Winter Orb at end of turn and continued the plan. Intuition fetched Accumulated Knowledge and dropped two in the graveyard. He attempted to Accumulate twice only for one to be Dazed.

In his turn the German cast possibly the best Brainstorm ever: pulling Force, thwart and the Donate he needed. Then it was time for Combo mode as he went for the Illusions of Grandeur. The counter-war began and Budde thought carefully before winning it with a Counterspell that prevented him from Donating the Illusions immediately. The Illusions came in and Budde gained 20 life.

In his turn Witt went for disruption. His Winter Orb was allowed in, but tapped with Ice. Witt went to Swords his own creature and Budde Forced.

Budde untapped and Witt found himself the proud recipient of an Illusions of Grandeur.

It wasn't over yet as the last card in the Dutchman's hand was a second Swords. The upkeep went on the stack and Witt sent a Dryad farming before deciding he could afford to lose twenty life. Even after gaining twenty life it didn't take long for two Werebears at threshold to bash that away and game 1 went to Witt. 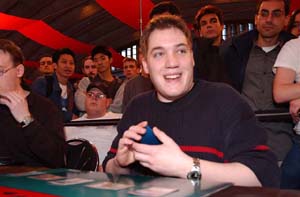 "What was the Meddling Mage about?" Budde asked.

"I only tested after sideboarding," Witt smiled.

Budde elected to start again and had to mulligan again. And again.

His five card had was as good as he could hope for as it had three land, Medallion and Intuition and pretty soon he was overcoming the deficit from mulliganing by Accumulating in Witt's upkeep.

Witt's hand turned out to be much worse as after his Dryad was Fired before it could start growing. A Brainstorm didn't find him a third land and he had to discard a Gush as one of his land was a Savannah.

Seeing this Budde countered a Sleight of Hand. Witt Dazed even though Budde could pay so he could relay the land and cast a Werebear.

The German went straight for the Jugular and dropped a Morphling.

Witt tried to race by adding a Meddling Mage but unfortunately he chose wrong again, naming Fire/Ice when Budde made a Powder Keg the next turn.

That was one race Witt couldn't win.

This time Budde didn't have to mulligan. Witt tried twice to get a Meddling Mage on the table and they died to various counters and Fires. 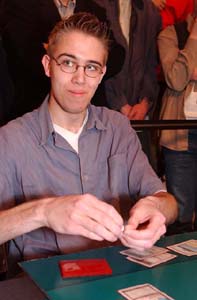 Another Fire and the third Mage headed off to the graveyard.

Budde had a much stronger hand with two Force, thwart and a Pyroblast.

Witt tried for a Quirion Dryad. Budde let it down so Witt started it growing with a Sleight of Hand.

The next turn settled the match.

Witt cast Gush and used the mana to drop a Winter Orb. Budde countered with a hardcast Thwart. Witt had drawn not one but two Orbs though and Budde had to Force it pitching the other Force and leaving one mana open to pay the Daze he knew Witt had.

Witt had managed to improve his hand incredibly since revealing it for the Land Grant as he had a second Daze!

The Winter Orb was down and suddenly the game was over as Witt had a 5/5 Dryad and Budde didn't have time to deal with it.

Witt becomes the first player to grind into the Masters and continue all the way to the final.