This is the big one. It's just a shame it had to be here, instead of with the title on the line. Unquestionably, they are the two greatest players the game has ever known. Kai Budde, the winningest man ever, finding retribution for his disappointing 4-3 performance at Houston. Jon Finkel, the game's first hero, resurgent after watching his former glories eclipsed by the new guard. Over lunch Finkel and Budde exchanged good-natured barbs. Finkel was particularly disappointed that Budde wouldn't throw the match to him. A win would guarantee his place on the Masters.

Both players were eager to get to the action, but they had to wait while camera crews got ready to broadcast their match. Every chair in the audience was filled, and fans lined the Feature Match Area three deep. 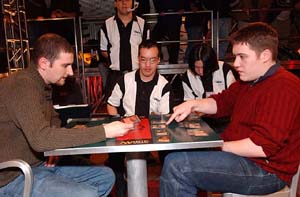 They drew their opening hands, and began.

Both players started by cycling away lands, and the first action was Finkel's Mistform Dreamer on turn three. Budde answered with a morph. Finkel hit for two and only had an Information Dealer to add to the mix. He looked downright embarrassed. Budde's morph smashed in. Finkel elected not to chump, and of course it was Skirk Commando. Finkel paid it back by sending his Dealer and playing Commando Raid.

Budde dropped a morph into play. Finkel was unconcerned. He held back his Information Dealer and waited, not having played a fifth land. Budde brought out Nantuko Husk and passed it back. Finkel showed him Solar Blast at end of turn, eliminating the face-down Charging Slateback. His Dealer gave him a peek at the top card, and it was still not a land. Threaten forced Budde to sacrifice his own Husk.

Menacing Ogre drew a gasp from the crowd. The bets were revealed: Finkel with one, Budde with five. The resulting attack brought Budde to seven. Budde cycled Barren Moor, but had no play. Finkel attacked again, leaving him at three, and tapped low for Riptide Shapeshifter. Then he reached across the table with a big grin on his face, starting to scoop Budde's lands for him. Budde drew, and admitted defeat.

"That Information Dealer might not be in the second game." – Jon Finkel

Finally they were ready for Game 2.

"May your luck be as good as it was last game." – Jon Finkel

Finkel started with Imagecrafter and then Mistform Dreamer while Budde had the duo of Rotlung Reanimator and Nantuko Husk. Finkel missed a land drop and played a morph. Budde Shocked it at end of turn. It was Voidmage Prodigy, and Budde recoiled in mock horror, earning big laughs from the crowd.

Budde was still shaking his head and laughing.

Budde's confidence was overwhelming. His next turn added Cabal Slaver and Shepherd of Rot. Finkel drew Lonely Sandbar, and even though he was at sixteen Budde was calling for the scoop. Finkel tried to make a game of it. Imagecrafter, Mistform Dreamer and Commando Reaid meant that he could wipe out one of Budde's creatures without giving him a zombie. Unfortunately, he Imagecrafted the Cabal Slaver, so that was the one he killed. He was a little frazzled at his error. Budde was his usual self.

Budde dropped the bomb: Cabal Archon. Not even Finkel's Menacing Ogre was a threat. Budde only had to pay three to keep it small. The Shepherd dragged the life totals down, and the Archon finished the job. 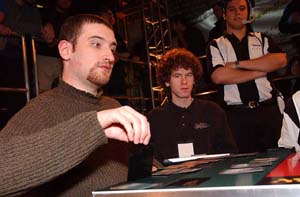 Finkel started this game by tearing through his deck with cycling cards before playing a facedown creature on turn three. Budde cycled Barren Moor and Shocked it. It was Skirk Commando. He followed up with Severed Legion, which fell to Finkel's Erratic Explosion, and then got in with morph and face-up Fallen Cleric. Finkel's Riptide Shapeshifter stood in the way. Budde added Husk and morph to his army, building his forces. Finkel's abundance of land enabled a Slipstream Eel.

However, Finkel was short on action, and Budde was making ready to bash through. He tapped Forgotten Cave and put a facedown creature into play, but then caught himself, showing the card to be Goblin Taskmaster.

"Morphs are cheaper in Germany, you know." – Kai Budde

Finkel had no play. That gave Budde time to unmorph his Charging Slateback, and add Shepherd of Rot to the table. Finkel's Mistform Dreamer was no matter at all. Budde unmorphed Spined Basher and got ready for the kill. He untapped and drained them both with Shepherd. He tapped three for Dirge of Dread. Finkel started thinking.

Finkel smiled as he flipped it up. Budde was left with just Goblin Taskmaster untapped. He did some quick calculations and swung for three. Finkel returned fire for five and played the facedown he'd just drawn. Budde untapped and thought hard, before tapping a single swamp.

"I'd have cycled a little earlier. I'm not Ben Rubin." – Kai Budde

It was Festering Goblin, and now Budde's troops charged. Finkel activated his Shapeshifter and looked for a Bird.

"If that is Ascending Aven, you lose." – Kai Budde

But no, the Aven was busy masquerading as a Grey Ogre, so Finkel was sure to hit his Fateshaper. It showed him Commando Raid, Riptide Entrancer and lands. He put the Raid on top. The Fateshaper blocked the Slateback, his morph blocked Fallen Cleric, and his Eel on Nantuko Husk. Budde pumped twice, dealing six unblocked damage, and after damage was on the stack, sacrificed Festering Goblin to finish off the Fateshaper, and ate his two dying men to save the Husk. The dust cleared and the board was Budde's Husk, Shepherd, Basher and Taskmaster to Finkel's Eel and Dreamer. The life totals were even at five.

And now Finkel had no outs. He drew his Commando Raid and held back, but Budde swung in, and readied his Shepherd, having drawn an irrelevant Shock to make things even easier. 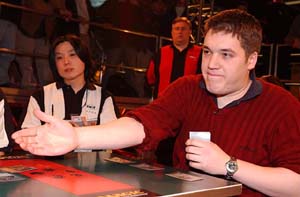 Finkel's opener was five lands, Mage's Guile and Solar Blast. He cycled the Guile into a land, and drew another. Not auspicious. Budde was kind enough to play a Sparksmith for Finkel's Solar Blast, and the cheers from the crowd made it clear they were on Finkel's side.

Budde's next play was just Shepherd of Rot, as he was stuck on two lands. Finkel played a morph. Budde, being Budde, pulled land number three off the top, showing Rotlung Reanimator. Finkel made no play. Budde turned on the pressure with Nantuko Husk. Finkel tapped three islands and threw his facedown Voidmage Prodigy in the bin.

He had nothing to do, though. He held just lands, Commando Raid and a Slipstream Eel. Budde meanwhile showed him a second Husk. Finkel drew another Eel and cycled it in hopes of finding a play. He got nothing. Pinpoint Avalanche showed up on his next draw step. He turned it over in response to the Shepherd's activation.

Finkel offed the Shepherd, and after eating a bunch of damage could only manage a Slipstream Eel. Budde started untapping, and Finkel simply thrust his hand out in congratulations.