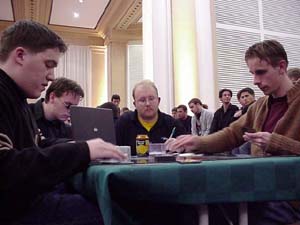 Kai Budde had drafted a very strong blue/black deck with highlights such as a recursive Gravedigger/Scrivener/Repel engine and Shadowmage Infiltrator. Joost Vollebregt had to try and stop him with an aggressive black/green deck.

Vollebregt won the die roll and chose to go first.

"That's not a Mongrel" Budde said as Vollebregt started with a Filthy Cur. Vollebregt was unable to follow it with a turn three play and certainly couldn't match Budde's turn 3 Last Rites. Budde traded three Islands for three strong black cards (Afflict, Childhood Horror and Ghastly Demise). He then traded a Dusk Imp for the Filthy Cur and made his Looter and followed it with an Infiltrator to leave himself in a really strong position.

A black creature would be good for Vollebregt but all he had was a Cartographer and a Krosan Archer while Budde ran amok with the Looter and Infiltrator. Vollebregt found a black creature to block, Fledgling Imp, but this didn't hang around as Budde Repelled it. The next turn it stuck but Vollebregt had a Windreader to worry about and pretty soon it was followed by a second.

An already hopeless game for Vollebregt got even worse when Budde dug an Aether Burst out of his graveyard with a Scrivener. Budde laughed as he drew a second Aether Burst off the Infiltrator and the game was so much in his control he even showed it to the Dutchman.

The next turn Vollebregt's blockers vanished into the Aether and it was time to shuffle up for game 2.

Vollebregt chose to go first and started better with turn two Cur, turn three Cartographer and then an Afflict for the Dusk Imp Budde put out on turn three as a blocker. Budde dug it back out with a Gravedigger, providing himself a blocker for the Cur in the process. Vollebregt kept up the pressure by summoning a Dirty Wererat.

Budde stemmed the tide with an Aven Windreader, but a Zombie Assassin appeared menacingly on the table. Budde bought himself some time with a Repel, but although he was able to Scrivener the Repel back the Zombie got active long enough to take down the Windreader and clear the way for Vollebregt to attack, knocking Budde to ten.

Budde summoned another Gravedigger but his principal problem was that his creatures had two power while Vollebregt's had three toughness, although they kept coming back.

Vollebregt lost yet another draw step as the Wererat was Repelled. He was then surprised when a Fervent Denial prevented it coming back. He didn't think the card would be good in the matchup.

Now Vollebregt was looking precarious as Gravediggers ensured a steady supply of troops on Budde's side while Repels had Vollebregt drawing the same old Krosan Archer. It wasn't enough as he couldn't keep the archer on the table or draw anything new and Budde rumbled on into the final.