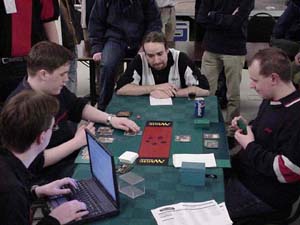 Budde showed again how top 8's loved him as his deck gave him a grotesque draw. Everyone's favourite two-drop, Wild Mongrel, came out and even though Budde had the Arrogant Wurm in hand he chose to lay a Torturer instead to deal with Eder's Hallowed Healer.

The Healer shielded an Aven Fisher on the way to the graveyard but the Mongrel battered straight through that and brought an Arrogant Wurm into play through madness.

It all got a little sick after that as Budde cranked a Nantuko Disciple and then a Rabid Elephant into play. Even a card as good as Balshan Collaborator didn't seem up to the task.

Eder wasn't so much beaten as Steamrollered.

Budde's draw wasn't so good in game 2, only a first turn Basking Rootwalla that started beating for three every turn. Eder fought back this time, pinching a Cabal Torturer from Budde's hand with a Mesmeric Fiend and trying to stop the Rootwalla with Immobilising Ink.

Wild Mongrel put in an appearance, but with a reduced hand it wasn't as much of a threat. A second Mesmeric Fiend stole a Rabid Elephant from Budde's hand. Eder summoned Mystic Visionary and Hallowed Healer while the green goodies kept flowing from the top of Budde's library as Nantuko Disciple and Springing Tiger joined the party.

Eder shut down the Disciple with a second Immobilising Ink. Then he showed his deck also had some brokenness as a Stalking Bloodsucker swooped down onto the board to dissuade the German Juggernaut from attacking.

A tense standoff followed and Budde dropped a Skyshooter to make sure the Bloodsucker stayed civilised.

Even a partially immobilised Nantuko Disciple was enough of a threat for Eder to devote two more cards, a Waste Away discarding an Aven Cloudchaser, to be permanently rid of it.

Carrion Wurm put in an appearance for Budde and the turn after he launched it into the red zone with Mongrel and Tiger for company. Eder fed three cards from his graveyard to keep the Wurm happy and tried to mug the Tiger with a Hallowed Healer and Militant Monk. The Tiger got bigger with a Sylvan Might and easily ate both Clerics.

The problem hadn't gone away and now Eder was two Healers down. Budde discarded a land to untap the Rootwalla and charged his monsters back into the red zone.

Realising the position was irretrievable Eder extended his hand and now only one player stood between the German juggernaut and a sixth Grand Prix title.