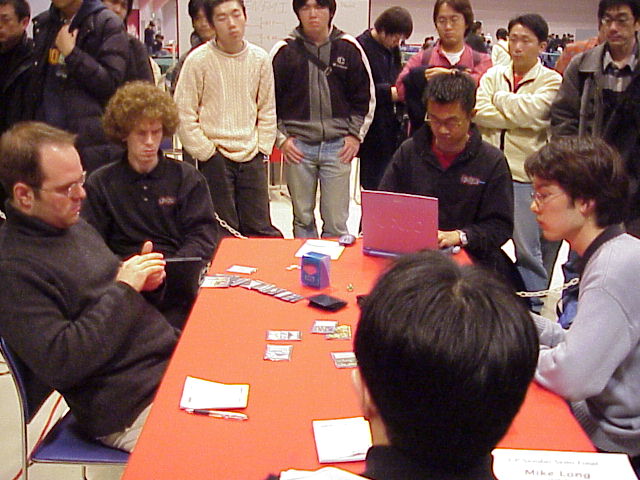 With a Donate mirror going on in the other bracket, things are looking good for Mike Long, who has dropped all of one game to Donate this weekend. The only thing standing between him and victory is amateur Kazuaki Arahori.

Arahori has proved himself again and again this tournament. First, his Zombie-Go deck is an exercise in successful innovation. Secondly, he smashed his way through the swiss, and destroyed Rookie of the Year Katsuhiro Mori in the quarterfinals. If anyone is fit to take on Long, it's he.

Long won the die roll and chose to play. He made a turn-two Werebear, and Arahori chose to Force it, pitching Intuition. Long was surprised at the move. Long came back with Waterfront Bouncer, and stopped a Daze with one of his own. The bounced island let Long have a Curiosity on his Bouncer.

Arahori answered with Finkel. Long Gushed but couldn't find a Force of Will. He bounced Finkel, but that wasn't the best of situations. He needed a permanent answer. Arahori replayed his Infiltrator. Long untapped and Brainstormed. He left his lands on top and went for a Land Grant. Arahori let it by, as Long had another in hand. Long decided to Sleight of Hand as well, as his hand was less than stellar. That gave Arahori a free hit with his Infiltrator.

Arahori's next move was Masticore. Long untapped and Land Granted again. He tried a Quirion Dryad. Arahori Gushed in response and thought. He chose to let it by. Long Gushed as well, but his body language was all concentration. He passed it back.

Arahori pitched Squee to his Masticore. Unfortunately for Long, he failed to notice that Arahori's Undiscovered Paradise had bounced, leaving him with just one land. He could have bounced the Masticore without fear of losing his Bouncer. However, he let Arahori into his main phase. Arahori replayed an island and attacked, leaving the Masticore on defense. Long let the Infiltrator through. Long bounced the Masticore at end of turn, but lost his Bouncer in the process. He shook his head. "Had to be done", he said.

Still without countermagic, and now with no way to quiet Finkel, Long was in a pickle. He could get some serious beatdown going with two Werebears in hand, but Arahori had a full hand. He tried one. Arahori Forced, pitching another Finkel. Long had to let it happen. 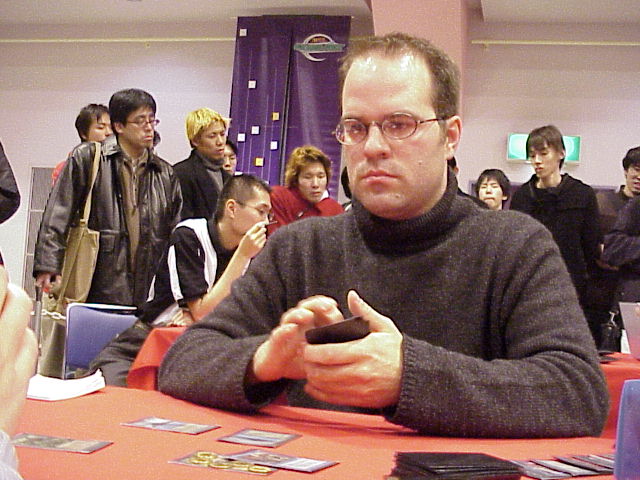 Arahori attacked, and passed it back, sitting on three lands. Long tried another Werebear. Arahori Counterspelled, and Long Gushed in response. He got a Force of Will. He let the 'Bear go, and dropped Curiosity on his now 4/4 Dryad. The tide of the game had shifted drastically.

Arahori needed an answer. He played a fourth land and a Masticore, countering Long's Force with a Daze. Long was unconcerned. He made a Mongrel to stop Finkel and passed it back. Arahori stayed on defense. Long sent his team. Arahori threw the Infiltrator in front of the 6/6 Dryad and attempted to eat the Mongrel with his Masticore. Long Brainstormed. It cost him four cards to keep his dog.

Arahori used all his mighty powers to summon the topdeck he needed, and he got it, finding Zombie Infestation. It entered play uncontested. Long swung again. A zombie stopped the huge Dryad, and the Masticore took down the Mongrel.

A zombie knocked Long to thirteen. Finally, the Dryad had to stay on defense. Arahori continued to build his army of zombies. After an agonizing six turns, he had the force necessary to smash Long. He did so.

For Game 2, Long kept a hand with just Land Grant, and had it Force of Willed by Arahori. Visibly distressed at this turn of events, Long slammed his deck so loudly it echoed through the hall. His ferocity paid off large. His deck coughed up an island to fuel Sleight of Hand. Another Sleight and he had his second land, as well as the crippling Phyrexian Furnace. 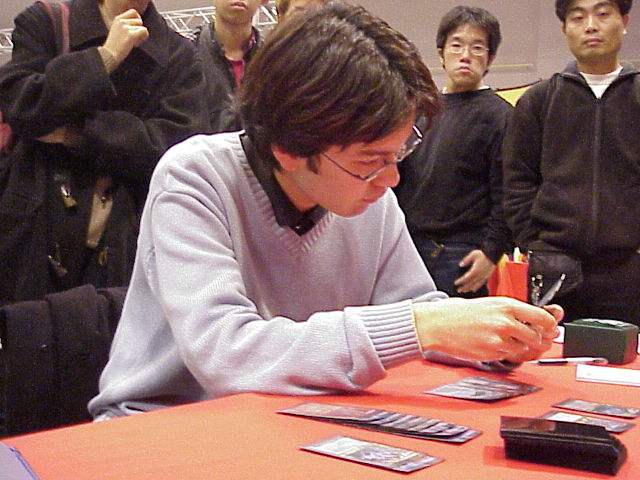 Arahori was unimpressed. He could feel the game slipping away from him. He made a Zombie Infestation. Long came back with Quirion Dryad and Wild Mongrel. Next turn he Brainstormed into Curiosity for the Mongrel. Long held back. Arahori Intuitioned for Squees. He lost one to the Furnace, but his zombie production was hastened by a Krovikan Horror in hand.

Soon he had five in play, and Long's Furnace had a few cards to burn through before it could stop them. Long had two Dryads, a Werebear and the Mongrel in play. He finally blew his Furnace to stop the Horror.

Still, he had no response to the Infestation. When Arahori had eight zombies, he Hibernated at the end of Long's turn. Long turned his dog black. Arahori swung. Long stole a zombie with Legacy's allure and fell to eight. He played out two more creatures. He stopped a Hibernation, but it didn't matter, he had to let four zombies through, giving Arahori the big upset win.