Kazuki Kato is from one of Japan's fastest growing pro hotpots: Nagoya. Home to the mighty Jin Okamoto and reigning Japanese National Champ Koutarou Ootsuka. Working with them has honed his latent talents. At his first Pro Tour he made the cut to Day 2, and his game has improved immensely since then. Ordinarily he plays decks designed by Nagoyan Kazuya Hirabayashi, but he set the craziness aside in favor of a mean machine by Katsuhiro Mori. His opponent, Yuichi Yamagishi, is no slouch either, having quietly posted a nineteenth place finish at Pro Tour – Yokohama this year. He works closely with former National Champion Goro Matsuo, and hails from Ishikawa. He's the lone Goblin player in the Top 8, and already scored a big upset win over Masahiko Morita in the quarters. 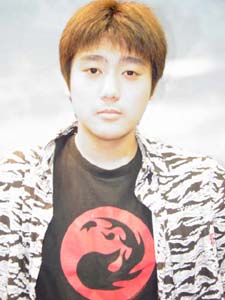 Yamagishi's Skirk Prospector enabled a third-turn Goon, but Kato had the Silver Knight just in time to stem the beats. A second Prospector was able to push past for three with the help of Goblin Burrows. Kato morphed an Angel, but Gempalm Incinerator got rid of it, and Goblin Warchief and Goblin Sharpshooter joined in on the fun.

Kato started cycling, trying to find a second red for the Starstorm in his hand. Instead he found only the most expensive spells in his deck, uncastable Akroma's and Decrees of Annihilation. His life total started to fall rapidly. Yamagishi added a second Goon to the table, giving Kato one last draw. It was a second Starstorm, mocking him. He scooped up his cards, and eagerly went to his sideboard.

Kato started things off right for the second game, with a Gempalm Incinerator to get rid of Goblin Sledder, and then a Silver Knight to stand in the way of Goblin Piledriver. Better yet, Yamagishi was stuck on two mountains and had no play. Kato hit in and waited on his Shock in case of Warchief, but none came. The Piledriver hit for an anemic one damage. Yamagishi added a Sledder to the table.

Kato held back and upped the ante with a morph. Yamagishi had no play. He unmorphed and swung for six, then played a second Knight. Yamagishi dropped a Warchief and swung all out, trading his Sledder for two damage. Hardly worth doing. Kato bashed again and Shocked the Warchief to earn the concession.

Kato frowned at his one-lander, but decided to risk his quarterfinals on his draws. They gave him lands, but they were Forgotten Cave and Secluded Steppe, so Yamagishi's double Piledriver opener had him at thirteen before he could get a man on the board. Goblin Goon showed up on turn three, and now Kato needed some serious help. 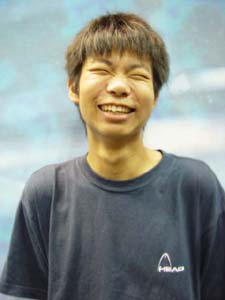 He cycled Eternal Dragon and untapped with four mana at his disposal. He played Silver Knight and waited on Gempalm Incinerator. He blew up one of the Piledrivers and blocked the other, falling to seven. Yamagishi played out another Piledriver and a Prospector. They got blown up by Starstorm on his next attack. All he could muster was a Goblin Warchief.

Again, Kato made no move. Yamagishi threw down a Siege-Gang Commander and bashed, but Kato had the second Starstorm to ruin his day. Kato finally tapped out for an Exalted Angel, but land number six for Yamagishi let him have Rorix, taking Kato to a dangerous one life. He fought back to five and sat on his Wing Shards. Yamagishi sensed it, and held back.

Now the Angel stayed home while the Knight got in for damage, and Kato played a second Knight. He had drawn a second Wing Shards, just waiting for a chance to wreck Yamagishi. Yamagishi played a Sledder and held his ground. The Knights brought him to nine. He played a Warchief and waited.

Kato swung with just one Knight and played a morphed Angel, sitting with six mana open. Yamagishi had no choice but to chance it. Kato flipped up both cards, and Kato scooped.