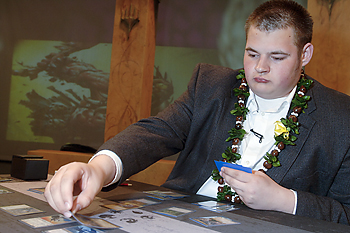 Conley Woods keeps Hebky in check. This is the third time that American player Conley Woods and Czech player Michal Hebky are squaring off this weekend. The score is 1-0-1 with the win going to Woods, so Hebky was hoping to even things up when it matters the most.

The players have seen each others’ deck lists, so there will be no surprises. Hebky’s Bant Aggro will be trying to attack Woods dead as quickly as possible, while Woods’s Five-Color Control deck wants to play a long game to get the most out of his slower, more powerful cards.

Both players kept their openers, and Woods opened on Island, Forest, while Hebky had Plains, Island and Deft Duelist. A third land from Woods, a Swamp, enabled Parasitic Strix. A second Plains and an Aven Squire later found Deft Duelist, cracking for 3. The Bird came through, and Faerie Mechanist netted Armillary Sphere. Deft Duelist cracked in again and Esper Cormorants provided a massive body for Conley’s 2/2s to shy away from.

Mistvein Borderpost and Armillary Sphere were all Conley could muster for his turn. Hebky was not so bashful, and pacified Parasitic Strix with Crystallization before smashing in for 5 and playing Courier’s Capsule. Woods cracked his Sphere for a Mountain and a Plains.

Faerie Mechanist came through for a couple points, and Volcanic Submersion shattered Hebky’s Esper Cormorants. In the lead at 16-9, Hebky decided he was happy racing and sent his Deft Duelist in again, knocking Woods to 6 before playing a second Esper Cormorants, which was quickly neutralized by a Crystallization from the five-color American.

Faerie Mechanist was run over by the first striking Deft Duelist, and Hebky decided to put lethal on the board with Kathari Screecher. When Woods cycled Fiery Fall for a second Mountain, Hebky sighed and started putting his creatures in the bin. His hunch was right, as Caldera Hellion devoured the crystallized Parasitic Strix and wiped Hebky’s board.

Hebky was quick to reload with Waveskimmer Aven while taking 4 from Caldera Hellion‘s attack. Canyon Minotaur ended the turn for the American, who now trailed 12-6.

Hebky finally cashed in his Courier’s Capsule and found an Ethercaste Knight. When he went to attack with Waveskimmer Aven with a Plains and Forest untapped, Conley showed him Dark Temper powered up by his Mistvein Borderpost. Hebky grimaced and ended the turn with Valeron Outlander.

Both of the red creatures entered the red zone the next turn and Hebky double blocked, trading his Ethercaste Knight for Canyon Minotaur. After combat, Woods suited up the Outlander with Crystallization before shipping the turn.

Enlisted Wurm provided two bodies for the Czech player, recruiting Aven Trailblazer, but Woods was unimpressed. He played Fleshformer and sent his two red guys into the red zone again. Enlisted Wurm and Aven Trailblazer double blocked Caldera Hellion and Fleshformer shrunk the 5/5 to make the trade with it. The life totals were now 6-2 in Woods’s favor, and Hebky squeezed his draw out, looking for a winner. He found Soul’s Majesty for a couple of cards, but neither of them were good enough, and he packed it up.

Woods sided in Molten Frame for Ridge Rannet, looking to save his Volcanic Submersion for the looming threat of Obelisk of Alara. 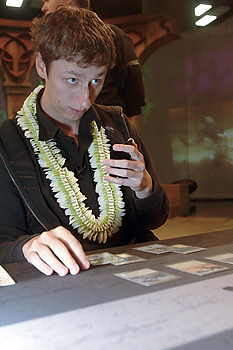 Michal Hebky shoots Wood a look. Both players quickly kept their opening hands, and Hebky played a Fieldmist Borderpost, Island, and Deft Duelist, while Woods had Mountain and Naya Panorama. Forest enabled Vedalken Heretic, and Woods cracked his Panorama for a Forest.

A Swamp allowed Conley to play Fleshformer, a threat that could be monstrous despite Crystallization. Frontline Sage allowed the Heretic to attack profitably and Woods decided it was better to let his opponent have a card now than to lose the Fleshformer‘s extremely powerful ability with a trade. Besides, Fire-Field Ogre was up next for the American, trading with Deft Duelist. Esper Cormorants took its place, but Woods cheerily laid out his domain, killing the Heretic and coming through for 4 with Fleshformer.

Esper Cormorants attacked for 4, and Soul’s Majesty drew the Czech player four cards. Down a grip of cards, Conley had to catch up on board. He did so with Dark Temper to execute the flier before he attacked with his 2/2 and passed the turn.

Ethercaste Knight allowed Frontline Sage to get in for 2, putting the totals at 14-10 in Hebky’s favor, but Woods closed the gap with another attack and a Ridge Rannet. Esper Sojourner iced the 6/4 and allowed Hebky’s Knight to put Woods down to 7. Enlisted Wurm hit Courier’s Capsule, and it was Wood’s turn.

Fleshformer struck again and Canyon Minotaur joined team USA before Woods passed the turn back without mana up to activate Fleshformer. Hebky studied, cashed in his Courier’s capsule, and shoved his 5/5 into the middle. Canyon Minotaur was quickly eaten, and Esper Cormorants threatened to cut the clock way down.

Conley tapped five and placed Caldera Hellion on the table. Frontline Sage looted a card and Court Homunculus hit the bin. Hellion ate Fleshformer and again wiped Hebky’s board, aside from a now less dominating Enlisted Wurm. Woods tapped his remaining mana to unearth Fire-Field Ogre and swing in for exact.

“At least I haven’t drawn Lavalanche yet,” Woods said, sheepishly.

Both players kept and Hebky opened with Seaside Citadel and Naya Hushblade, while Woods had two Mountains and Armillary Sphere. Hebky played an Island and jumped into the tank. Bant Charm Demolished the artifact and the ‘Blade hit for 2. Naya Panorama fetched a Plains while Deft Duelist and Court Homunculus joined the Czech team and the ‘Blade came across for 3.

A third Mountain from Woods let him put Canyon Minotaur into play, but it didn’t block the Hushblade, which knocked Woods down to 12. Kathari Screecher ended Hebky’s turn.

Calm as ever, Woods devoured the Minotaur with Caldera Hellion and wiped the board. Crystallization jumped out of Hebky’s hand, but Fleshformer with the requisite mana threatened to put a quick end to the Czech player’s run.

Waveskimmer Aven powered up Frontline Sage for one last rumble before the Fleshformer ate it, but Woods was falling behind, down 12-6 after the Screecher attacked for 3. Enlisted Wurm found Esper Cormorants. An unearthed Kathari Screecher later, and Hebky had taken his first game in the match. 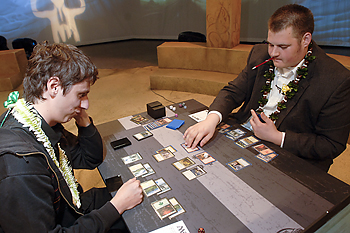 The pen really is mightier than the sword, or at least tastier. Woods quickly kept his hand again, while Hebky pored over his Seaside Citadel, Wildfield Borderpost nonbo. He showed it off before shipping it back and keeping his next six.

Conley had a Mountain and a Naya Panorama opposite Seaside Citadel and Forest into Vedalken Heretic, with Michal hoping to un-mulligan with the little guy. Woods grabbed a Plains with his Panorama on end step before playing a Forest and Paragon of the Amesha. Crystallization pacified the first striker, and Hebky indeed did get his card back. Conley fired back with Canyon Minotaur, announcing, “I will block.”

Kathari Screecher was Hebky’s reply, while Woods fixed his mana with Mistvein Borderpost. Ethercaste Knight powered up the Screecher, which attacked for 3. Conley had no plays for his turn, but did have a Fiery Fall for the 2/2 when Hebky attacked. Esper Cormorants replaced it, and Woods could only answer with a second Mistvein Borderpost.

Frontline Sage sent the flier over for 5, knocking Woods to 11, and the American announced, “Pretty spicy,” as he drew his card. He pointed Grixis Charm at Esper Cormorants and then pointed the turn over to his opponent.

Hebky chewed his lip as he looted with Frontline Sage, discarding Court Homunculus before attacking with Ethercaste Knight. Courier’s Capsule concluded the Czech player’s turn, and it was Woods’s turn to hem and haw after he drew.

Hebky shrugged as Woods scored an easy 3 with Canyon Minotaur. Ridge Rannet outclassed the board after combat, but Waveskimmer Aven took the fight to the skies for Hebky. When Conley tapped five, Michal started grabbing his creatures with less than 4 toughness, but Woods shook his head. He pointed Volcanic Submersion at Seaside Citadel and attacked with Ridge Rannet. Vedalken Heretic took one for the team, and Molten Frame wiped out Ethercaste Knight post-combat. Woods was trying to craft a board and a series of turns where he could race the Waveskimmer Aven.

Hebky inspired himself with Courier’s Capsule before attacking for 4 with Waveskimmer Aven. Woods smashed in for 9 with his team, banking on Pale Recluse to hold the fort, but Hebky had the Bant Charm to clear a path for his Bird Soldier to get in for exactly lethal damage.

Michal had shoved the door wide open after being down 2-0. It was all down to this game. The winner would move on to the Finals, while the loser would watch from the sidelines. 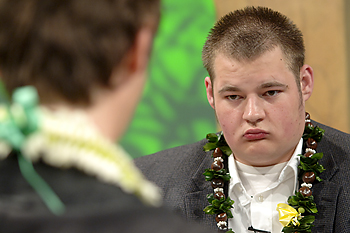 Woods tries to pull things out. Woods grimaced as he sent back his opening hand before disappointingly discarding the next batch as well.

Hebky kept his starting seven almost immediately, and with just five cards to work with, Woods led off with a Mountain and a Swamp. Seaside Citadel and Plains found Naya Hushblade on turn two, but Woods almost had all of his mana online with a Plains and a cycled Pale Recluse for a Forest.

Deft Duelist and Court Homunculus joined forces with the Naya Hushblade, allowing it to attack for 3. Woods knocked on the top of his library and found an Island, completing domain. Parasitic Strix was Bant Charmed out of the way, and Hebky’s team crashed in for 6. Woods again rapped on the top of his deck, but revealed a bunch of land. He extended the hand.

Michal Hebky storms back from a huge hole to defeat Conley Woods 3–2 and advance to the Finals!

1 Paragon of the Amesha