Despite all of his accomplishments in Magic, Marco has never won a Grand Prix. Today, he's two matches away from winning his first. It would also make him the first Non-North American to win a U.S. Grand Prix. He's playing his trusty Wake deck. Keith lives in Brandon, FL. He's been playing Magic since Mirage, but stopped during Urza's and started playing competitive Magic since Torment or so. This was the first time he ever was playing in the Top 8 of a major tournament. He's with the tournament's other heavy-hitter: Goblins. 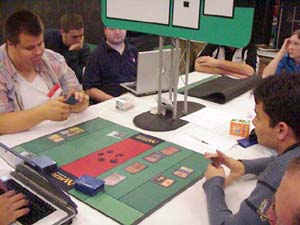 Keith opened up with a Goblin Sledder, and the beatings were on. A turn two Piledriver and turn three Sparksmith accelerated the beatings a little more. Turn three came and went, as did turn four. Marco looked dejected each time he looked down at the table.

Marco was stuck with an Island and a Forest in play, nowhere near enough mana to make his Wake deck work efficiently. Keith on the other hand was good with just his two mountains on the table.

Marco used Moment's Peace, then flashed it back a turn later, but all he was doing was delaying his impending death. Unable to Compulsion into anything useful Marco packed up his cards and prepared for Game 2.

Marco started off the second game with good mana. He was able to Leak a Goblin Warchief, gaining valuable tempo. Keith tried to climb back into the game, casting several goblins but never being allowed anything that might turn the game around. Each time that a Warchief came up Marco had the counter for it. 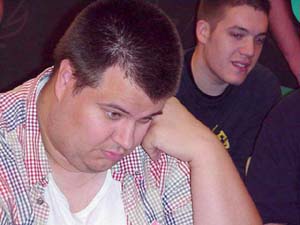 Keith was able to laugh about it a little though, even remarking that it's good to make your play mistakes when they don't matter.

Keith started quickly, getting a turn two Warchief onto the table, and then trying to add a turn three Piledriver. He got away with the Warchief, but by the time he tried the Piledriver Marco had enough land in play to cast Mana Leak on it. 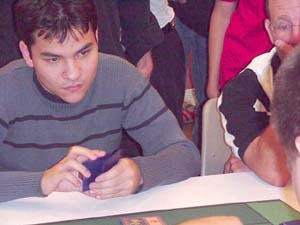 Nothing else went Keith's way the rest of the match. He was unable to find anything to help him, so when Marco cycled a Decree of Justice he was able to just laugh about it.

Marco's tokens looked like they came from some German trading card company specializing in models.

Keith watched as Marco then placed an Anurid Brushhopper next to the tokens and started swinging.

Two turns later Keith was done, this tournament was over him.