Making it to the semi finals of a GP is no easy feat, and many Magic players will go through their whole careers without making it this far. Both players are looking to take it one step further and to make the leap into the final. Looking at the decklists Polgary has to be the odds on favorite, his deck is what would normally be described as insane, but Hoon won't go down without a fight! 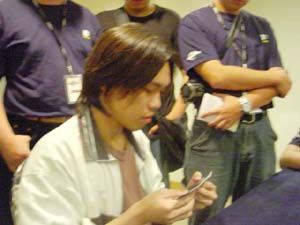 Despite offers from Polgary to decide who would go first by means of an arm wrestle, the flip of a coin and fate decided that Polgary would get to start. Stonewood Invoker seems to be the traditional second turn play for Polgary, with one coming down in all of his finals matches so far and he didn't disappoint in this match, backing it up with a morph on turn 3. Hoon had three plains on his third turn and could do little else but cast a morph. When the morph jumped in front of the Invoker he took two damage from the unblocked morph and Polgary played out another morph. Hoon failed to draw his second color and had to settle for another plains playing out a morph, but it was easy pickings for a Skirk Marauder, which cleared the way for the team to enter the red zone backed up by a freshly summoned Wirewood Elf.

After finally drawing a swamp Hoon cast a Goblin Turncoat, but it looked to be a mere speed bump for the massing Polgary army, who thought for a while before attacking with the morph and the Marauder. The Turncoat jumped in front of the Marauder, and Polgary flipped up an Undorak to deal an extra damage to Hoon. Polgary then played out his Timberwatch Elf, and Hoon could only play out a morph leaving 3 mana open, and passed back the turn. Polgary played out yet another morph and crunches in with the Undorak and the Wirewood Elf, Hoon's morph jumped in front of the Wirewood Elf and Polgary was forced to make a decision, should he keep the Elf alive or should he deal extra damage. The answer seemed simple when he flipped up his morph, a Birchlore ranger, and pumped the Wirewood Elf with the Timberwatch Elf, killing the morph. Hoon played out a Whipgrass Entangler which forced Polgary to tap two of his mana to let the Undorak attack. The Timberwatch Elf pumped up one of the unblocked elves and Hoon took 5 damage to the scone, having been forced to chump the Undorak. After inspecting his draw phase he had no choice but to scoop up his cards and head to game 2.

Hoon elected to play first in the second game and cycled a Barren Moor on his first turn and then a Disciple of Grace on his second turn. Polgary kept up his tradition of turn two plays, but this time was not the Stonewood Invoker, dumping out his Wirewood Elf. Deftblade elite made an appearance on Hoon's side of the board and after Polgary attacked into him with the elf Hoon declines to block and cycles away his Disciple of Malice. The Deftblade comes counterattacking back and is joined by a morph creature. Polgary sits back on 5 mana with nothing to do, taking two from the morph creature and things are beginning to look a little fishy. Hoon played another man to the board, slapping down a morph, and saw the board swept by Slice and Dice on Polgary's next turn. 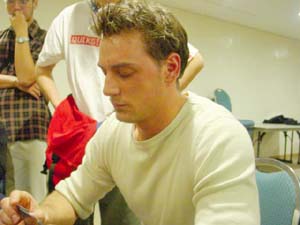 Hoon was unphased and played out a Glarecaster and jokingly asked Polgary had the Pinpoint Avalanche, which Polgary was more than happy to flash, and used it on his next turn to knock it out of the skies. Now Hoon looked a little worried as all he had left to play was an Entangler. Polgary played down his Hivemaster, and it supplied him with an insect when Elven Riders came into play. Entangler tied down the Rider three times, which was easily paid for and then came across the board to say hello, joined after the attack phase by Spitting Gourna.

Once again Hoon had nothing to play, dropping more and more land , and his Entangler was doing little as a lone cleric. The Riders got entangled four times but was once again paid for, and the Gourna and Rider came crashing in. Polgary played out his Krosan Vorine which threatened to take down the almost useless but quite annoying Entangler. Hoon continued to play out land, reaching the total of 9 but his lone entangler was standing no chance against the monsters, and he could hold out no longer using Infest to take out the Vorine, the little token and the Hivemaster. Hoon then played out his Akroma's Devoted, upping his Cleric count to two, but he had taken a lot of damage, and was leaving his comeback a little late.

When the Elven Rider was entangled with the two spare mana, Polgary declined to pay for it, opting to send in the Gourna on its own, forcing Hoon to take 3 damage. Timberwatch Elf and Snarling Undorak came down to party with Polgary's other monsters and Hoon thought for a long time, looking at the card he'd just drawn before playing out Smokespew Invoker. Polgary announced his attack and Hoon entangled the Gourna, which Polgary declined to pay and the Undorak, which was also declined. Polgary sent in the Rider on its own then flashed a Skirk Marauder sitting in his hand, which would deal the final two damage to Hoon to end the game and he scooped up his cards.