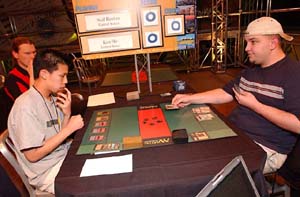 It's always a good show when the lights are on Neil Reeves. He comes into full form, playing up to the crowd. It's no surprise that he's gotten so many chances to show off, considering his prodigious talent. Ken Ho is no slouch either. You might remember him from a little something called Pro Tour – Osaka. He won the whole thing. A Masters Title would suit him just fine. They started shuffling, and the banter started just as fast. Reeves smiled as he accused Ho of peeking while he side-shuffled. It snowballed from there.

"This is gonna take like six hours." – Ken Ho

As Reeves piled his deck, Ho kept his mind on numbers so it would be hard for him to count. Reeves offered a minor curse.

"You and that toothpick. So what, you're like that wrestler?" – Ken Ho

Ho won the die roll and kicked off with Basking Rootwalla. Reeves had an island, but no Force Spike for Ho's turn-two Wild Mongrel. Reeves dropped a swamp and cast Innocent Blood, getting rid of the Rootwalla, and Ho decided it was a good time to bring out a Standstill.

Three turns went by, with Reeves and Ho building their mana. The Mongrel's relentlessness brought Reeves to eleven. Finally, at the end of Ho's turn and with five mana open, Reeves cracked the Standstill with Cunning Wish. Ho drew three and let it resolve. Smother from the board tried to end the Mongrel. Ho started thinking.

He let it by. He was still done at the end of his turn, holding the full seven. Reeves untapped and threw on a Boston accent.

That one stuck. Reeves, tapped out, handed it over. Ho Studied away forest and Wonder, then dropped a pair of Mongrels. It left him with three cards after playing City of Brass. Reeves took down one with Chainer's Edict, and ended his turn with four mana up. Ho swung, but didn't risk a spell. Reeves stood at eight. He had another Edict, and protected it from Ho's Circular Logic with one of his own, sent through the Compulsion. Strangely, Ho chose not to pay the four, sending his Mongrel to the yard. 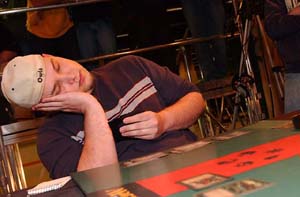 Then came Werebear, a Ho trademark. Two turns would give Ho the first game. Reeves, without a way to stop it in hand, put out Compulsion. Ho bashed, and waited to see what happened. Reeves drew, and then activated Compulsion. Then he pushed all his cards together and started shuffling.

"See how easy it is? You play your little creatures; if they don't all die you win. Simple!" – Neil Reeves

Then he was moved to break into song. It was "Knockin' on Heaven's Door".

Reeves mulliganed to open the second game. Not auspicious. Ho's hand was acceptable. Reeves started with Polluted Delta, but then "forgot" to sacrifice it, signaling that he was not choked with lands. He followed up with island. Ho sat patient. Reeves drew on his third turn and passed it back.

Ho was still immobile. Reeves's draw phase was kind, serving up another Delta. Ho tried a Merfolk Looter. Reeves was prompted to send out for a swamp, conveniently adding a card to his graveyard for Ghastly Demise. He drew another non-land and turned it over. Ho decided it was time to strike. He started with Ravenous Baloth. Reeves allowed it. He tapped out for the Standstill. Reeves went for an island with his Delta.

He wasn't just being coy. He had Hibernation at the ready to send the Baloth home. He was content to play the waiting game. He had a full grip. Ho didn't dare disturb the Standstill. Finally, Ho tapped seven during his main phase. Reeves was taken aback.

"Who casts spells with Standstill on the table?" – Neil Reeves

"You look like you need some lands." – Ken Ho

It was Roar of the Wurm. Reeves allowed it only to Smother it at end of turn. Ho's next turn put him deep in thought. Reeves occupied himself by answering along with Question Mark at the other end of the hall. He had to name a creature type for each letter of the alphabet. He didn't make it past "F" without taking liberties. 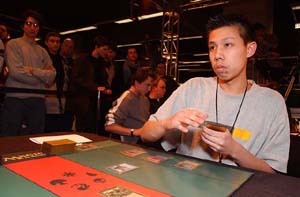 Finally Ho was active. He flashed back his Roar and replayed the Baloth. Reeves had removal for both. Ho tried again on his next turn. This time Careful Study madnessed a Rootwalla. He refueled with a discarded Deep Analysis. That was all fine. Compost earned Circular Logic. Blood took down the Rootwalla. Ho untapped and forced out another Logic with Compost. He piled on another Rootwalla, Wild Mongrel, and Standstill with two mana up. Reeves tried Counterspell. Ho had the Logic. Ghastly Demise stopped the Rootwalla in its tracks, but the Standstill resolved.

Now things were bad for Reeves. He flashed back his Analysis and gave Ho three cards. He tried Innocent Blood, and countered a diving Rootwalla. Ho went for the Circular Logic with his last mana. Reeves dropped Force Spike.

Now the way was clear for Ho. He played Careful Study and discarded a pair of lands. Upheaval came next, wiping the board and leaving him with two Mongrels. Reeves only had island, go.

He was probably addressing himself. Ho swung in and pitched his whole hand, leaving Reeves at one. Reeves just shook his head. He untapped and extended the hand.