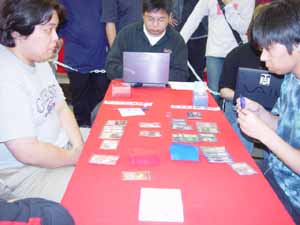 The term “Ponza” came from a dish favored by Midwestern Magic players, the area where the deck was created. Why would you name the deck after a food? Partially, because it was “meaty”, or in the case of the deck, had plenty of fat in the form of creatures like Orgg. Fast forward to 2003, and Hisaya Tanaka has dropped the fat to create a leaner, meaner and quicker red deck. By combining the fast blitz of Goblin Piledrivers, Blistering Firecats and burn spells with land destruction, Tanaka is able to put a significant amount of pressure on decks like Mono-Black, Psychatog and Wake, and use Stone Rain and Pillage to slow down their mana development and get that extra turn to get more damage through.

Tanaka’s opponent, Koutarou Ootsuka, played in the Top 8 of this tournament last year, but failed to make the National team. This time around, he advanced past the Quarterfinals, and finds himself one match away from representing Japan in Berlin this August. He has a somewhat odd creation himself, running a blue/green madness deck that splashes black for Smother and Zombie Infestaion, as well as additional disruption in the sideboard. His standard assortment of Mongrels, Arrogant Wurms, Phantom Centaurs and 6/6 Roar tokens can certainly give Tanaka a hard time. Without a doubt, the early game belongs to Tanaka, but if Ootsuka can hang in there and stay out of burn range, his green monsters will take care of the rest.

Tanaka opened with Goblin Taskmaster, and had a second turn Piledriver. That died quickly to Smother, and Tanaka wiped out Ootsuka’s swamp with Stone Rain. Another Piledriver followed, and Tanaka would have dealt an incredible amount of damage by adding Blistering Firecat to his next attack if not for Circular Logic. Ootsuka played Phantom Centaur to stabilize the board, but it didn’t stop Tanaka at all. He sent two Firebolts at it, sacrificed a Barbarian Ring to finish the job, and continued his attack with the Taskmaster and Piledriver. Ootsuka came right back with Wild Mongrel, and Arrogant Wurm gave him more to work with, and Roar of the Wurm put it over the top. Tanaka couldn’t get enough burn to stop Ootsuka, and soon Wonder was discarded to fly over the Goblins and take the first game.

Tanaka opened with a pair of Goblin Sledders, and Firebolted a Merfolk Looter. Ootsuka’s Duress revealed a hand of Threaten, Volcanic Hammer, double Piledriver and a Taskmaster- Threaten went to the graveyard. Unfortunately, Tanaka was stuck at one land, and Ootsuka got to work, casting Quiet Speculation to put two Roars into his graveyard. Tanaka found another land and played the Piledriver and a Taskmaster, and went about the business of attacking. Wild Mongrel spit out an Arrogant Wurm, and the resulting block saw the Mongrel kill the Taskmaster, and the Piledriver trade with the Arrogant Wurm. This left a Mongrel and a 6/6 Wurm to Tanaka’s two Sledders, and with that kind of advantage Ootsuka easily went up two games to none.

Tanaka had a first turn Goblin Sledder, and used Volcanic Hammer to kill Merfolk Looter. Wild Mongrel came out on turn three and Tanaka cast Breaking Point- Ootsuka let the Wrath of God effect happen. He then untapped, and summoned Phantom Centaur, which blocked a Blistering Firecat to absorb some of the damage. Quiet Speculation got two Roars, and Tanaka smiled as he played Goblin Sledder. He laughed and joked around a bit, as he knew his deck was ill-equipped to deal with a pair of 6/6 creatures.