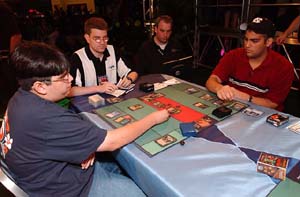 Kush Patel, a sixteen-year-old from Massachusetts, gets the task of trying to stop young Edward Solis's red/green beatdown deck. I witnessed Solis demolish his quarterfinal opponent in three games, and now we will get to see if red/green is indeed the foil of the format's marquee deck, Psychatog.

Patel had to call Pyschatog itself into service on turn three, but Solis then played the problematic Yavimaya Barbarian. Patel took a couple hits, but then drew a second Nightscape Familiar that would help hold the ground; Patel looked like he had stabilized at 12 life.

Solis's attempts at burning the Familiar out of the way were repeatedly countered, so he had to commit everything he had to the board. Eventually he got a Firebolt to resolve, tapping the Familiar, and then Patel was staring down an attack force of two Call of the Herd tokens, a Wild Mongrel, and the Barbarian, with the Rootwalla hanging back. Patel Fact or Fictioned inside the attack step, then Recoiled one elephant and ate the other with Psychatog, taking four damage down to 8.

Then Patel started taking over. He Fact or Fictioned twice more, and one of them gave him and Upheaval. He put out a second Psychatog to hold the fort for a turn, then tapped 11 mana, Upheavaled, played a land, and put out a Familiar and two Psychatogs. Game over.

After sideboarding, Solis had to mulligan to 6. His hand looked to be packed with burn, as he started off with two straight Volcanic Hammers to Patel's noggin, the second of which was met with a Force Spike. It quickly became evident that Solis was actually having mana issues; he was stuck at two Mountains.

Patel, meanwhile, was Fact or Fictioning away, casting the overpowered instant twice in his quest to build the perfect hand. The game kept getting more and more lopsided; at one point, Patel had out nine land and a Familiar to Solis' four Mountains.

Patel cast Upheaval and floated three mana. Solis responded by floating four red. If Solis had a Sudden Impact, Patel would have lost – he was at 12 life from random Firebolts and Hammers that Solis had peppered him with out of frustration. Knowledge is power, and Patel knew from Solis's decklist that Sudden Impact was not on the menu. So Patel went ahead with his play, playing an Island, a Familiar, and a Psychatog, but Solis's end of turn play was just a Violent Eruption.

The 'Tog struck for lethal damage on the following turn.

With his back against the wall, Solis would need some above-average draws to come back from an 0-2 hole.

Solis started game 3 with a Grim Lavamacer and Reckless Charged it over on turn 2. He then Volcanic Hammered Patel's Nightscape Familiar, but that gave Patel a card in his graveyard, allowing him to Ghastly Demise the Lavamancer. 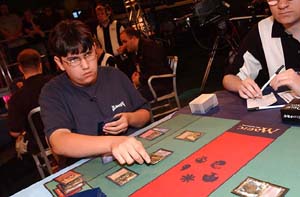 Solis cast and attacked with some new guys, like Yavimaya Barbarian and Spellbane Centaur. They took a few points off Patel's life, but they were both Demised in turn. Solis made a Call token, but that was Recoiled. He looked upset at how much spot removal Patel had drawn. His next attempt at Spellbane Centaur was countered, but a second Lavamancer resolved.

Patel, who was struggling with land, finally drew a Psychatog and gummed up the ground. But Solis's Lavamancer was in shoot-mode at Patel was gradually plinked to 8... Atog attacked, and the Lavamancer plinked Patel to 6. Solis tapped his last three lands and cast Urza's Rage.

Patel asked if Solis had another Rage that would just end it, but Solis did not. He untapped and cast another Lavamancer. Patel took a deep breath and countered it. But Solis had the nuts, tapping his three mana to cast his last two cards – Wild Mongrel and Reckless Charge.

Patel never drew a third land. He countered a Mongrel, but a second Lavamancer came down, plus a Barbarian. Solis complicated things by drawing Keldon Necropolis, a land capable of turning his creatures into little Firebolts. He never needed to activate it, however, winning the game with Grim Lavamancer and a flashed back Firebolt. 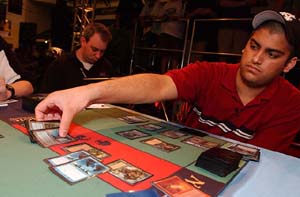 This is it, folks. Solis needs one more win to come back from 0-2.

Patel opens with Salt Marsh, and Solis had the turn-one Lavamancer again. Solis made a Barbarian (Solis had no Force Spike), and then he started going to the dome.

Eventually Patel found a Psychatog and a way to deal with the Barbarian (Ghastly Demise), but the burn kept coming, especially when Solis reached five land and started Flashing back the Firebolts. Patel had no answer.

Somehow, against the odds, Solis came back from an 0-2 deficit to advance to the finals. Long live red/green!