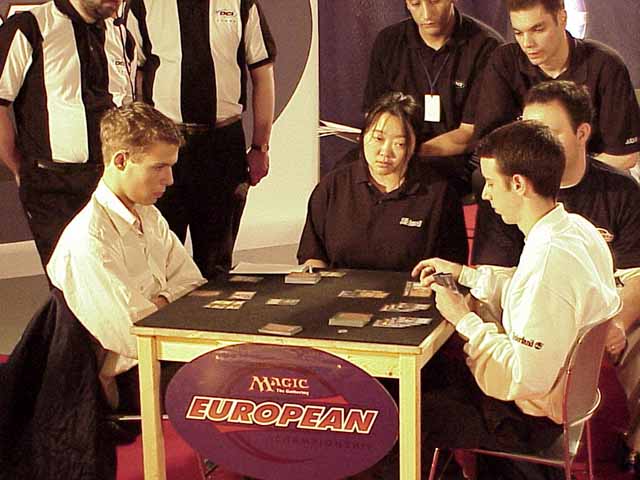 In the semifinals, Noah Boeken faced Loic Dobrigna in a match where green creatures would try and break through a wall of defense before huge critters would bust into the field. Playing Stompy, Noah had already crushed Gert Coeckelbergh's Trinity deck, while Loic Dobrigna had defeated a lot of rebels and their leader, Wolfgang Eder.

Dobrigna won the coin flip and chose to go first. He played a Faerie Conclave, and Boeken played a Wild Dogs. When Loic then played an island and a Powder Keg, Noah tossed down a Vine Dryad, removing an Elvish Lyrist from the game. He followed up by Rancoring the Dryad, and the two creatures went in for five.

Over the following turns, Noah tried to get through two River Boas, but they were both countered. Loic's Powder Keg blew up the Wild Dogs, and the Frenchman then Treacheried the Dryad and started tapping down Noah's Treetop Village, one of the three lands his opponent had drawn.

Noah continued to cast threats, but Loic always had an answer. His Elvish Lyrist was Miscalculated and a Rancor was Annulled, and at this point, Noah looked through the Frenchman's graveyard with an expression of disbelief.

Things started looking bad for Noah when a Morphling hit the table, and Loic began to attack. A Stroke of Genius gave Loic a couple of extra cards, and he played a Powder Keg and then a Masticore. Noah let out a content smile when he managed to kill the Morphling by a timely Giant Growth. He also got through a Lumbering Satyr and slapped in on the table as Loic didn't seem to have a counter. But thanks to the Masticore and a Rewind for another Rancor, Loic never felt threatened by it. Instead, he sent in the forestwalking Masticore before blowing up the Satyr, and the Masticore went all the way.

"It was a good game. Well, not really, because you won. It was an ok game," Noah commented while sideboarding. 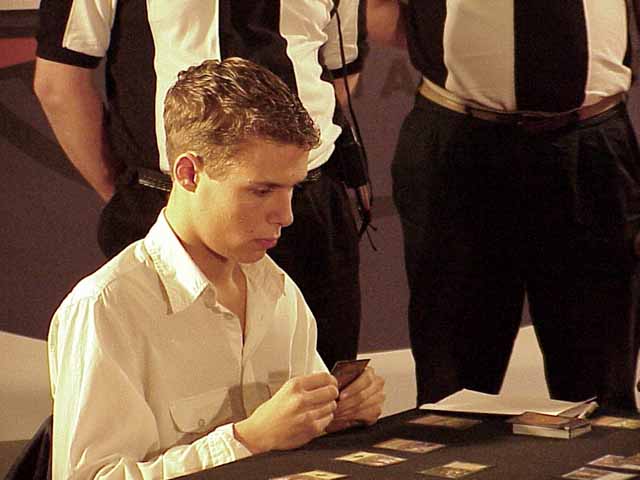 "Now I will crush you. Good luck," Noah grinned before the second game started. And this game was totally different. Boeken played a Treetop Village and then a River Boa. Dobrigna didn't have any basic lands, though - or perhaps he just didn't cast them. Instead, he played a Faerie Conclave and a Dust Bowl and then another Faerie Conclave. "I won't play islands," he proclaimed. "You suck," Noah joked, but it didn't really matter. Noah tried to Rancor up the first Boa, an Annul stopped that. But the Boa attacked, and another Boa came into play.

Loic had a Powder Keg and cast it, but Noah attacked with the Boas and cheered as he slammed down an Uktabi Orangutan to kill the Keg. Dobrigna, getting low on life, tapped out to play a Masticore, just to see Noah slam down yet another Masticore. After getting down to five live, Loic simply drew a card and scooped.

"This was a better game," Noah smiled after beating the Frenchman down. "Monkeys are good."

Dobrigna chose to play in the third game. Boeken mulliganed, but he still got a decent draw and bust out a Rushwood Legate and a Pouncing Jaguar during his first turn. Again, Loic cast Powder Keg, but the Jaguar and the Legate went over for several visits before he blew it up to kill the Jaguar.

Noah tried to summon an Albino Troll, and as he had two mana in play, he was able to pay when Loic responded with a Miscalculation. But Loic Withdrew both the Jaguar and the Troll during his turn to slow down the attack. An Uktabi Orangutan was also Miscalculated, but when Noah had another Orangutan when Loic cast a Masticore, the Monkey got to do its work.

It seemed like Dobrigna was wriggling out of the tight situation. He had four lands only after Dust Bowling Noah's Gaea's Cradle. But by casting a Grim Monolith and then a Treachery, he was able to neutralize both the Legate and the Monkey by blocking. Noah cast a Tangle Wire to try and slow down Dobrigna, but the Frenchman elegantly maneuvered himself out of it. He untapped the Monolith during Boeken's end of turn phase, then he tapped everything but one land and the Monolith just to topdeck and play a Masticore.

Loic's problem was that he only had one card in his hand, but the crowd cheered while Noah looked a bit frustrated. He cycled a Wild Dogs to draw something, and he cast a Pouncing Jaguar and an Albino Troll. Loic, at six, had to hold his Masticore back for defense. Noah then attacked with the Jaguar and the Albino Troll. Loic blocked the Troll and, in response to a Giant Growth, he tried to shoot down the Jaguar - but Noah had yet another Giant Growth and won the game. 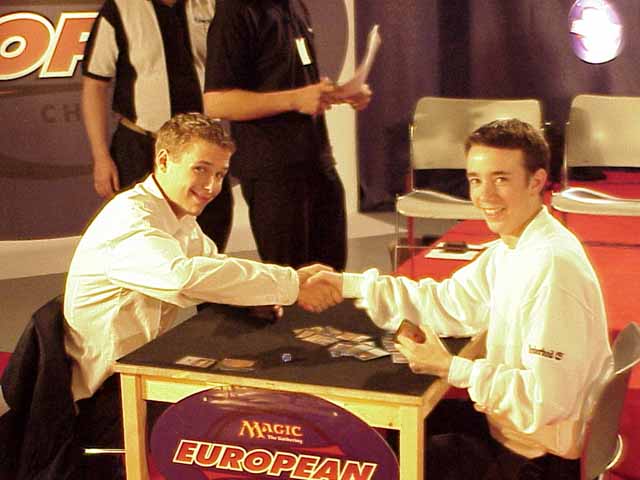 The final game was nothing but a beating. Dobrigna mulliganed once, and played an island. That was Noah's cue. He slapped down a Pouncing Jaguar and a Rushwood Legate - and then another Rushwood Legate. The assault started, and Loic had plenty do to just trying to defend himself. He cast a Powder Keg and blew up the Jaguar, but a the Legates kept beating him down, one of them even Rancored up.

Noah then summoned an Albino Troll, but when he attacked, Dobrigna cast Hibernation. The creatures jumped up on Noah's hand just to jump back down on the table. Loic then Treacheried the Troll, and the Legates took another trip back to their owner's hand after a Withdraw. But they were back the next turn, and Noah tried to cast Rancor on one of them. An Annul stopped the Rancor, but Noah had yet another one. A Tangle Wire later, Noah was in the finals.