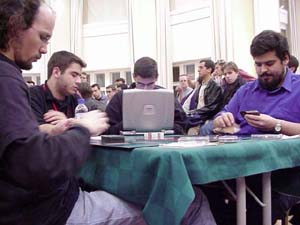 The tension was mounting and the crowd was huge. Not only were the Spanish very excited about Lucio's performance but Nicolas was the last hope for a French champion. He is used to pressure after so many years and so many important events, while the Spaniard was literally running on adrenaline, drawing each card with sheer energy and pumping out spells with heart.

Nicolas whistled up a mulligan telling his deck to behave next time around.

Nicolas: "I'm a fast player but I need to shuffle for a long time."

His mulligan came out fine with a turn two Thought Eater while Lucio took time to thin out a land with a Rites of Spring. Nicolas' Springing Tiger didn't stick around for long getting promptly taken down by one of Lucio's three Demises.

The Spanish army soon had a Krosan Archer and a Werebear but Nicolas seemed out of creatures. Instead he dropped a Seton's Desire to pump his Thought Eater and sent it in.

Moratinos blocked it with the Archer and pump it discarding a card. The Spanish had a Werebear and, from what we saw in the quarterfinals, likes to reach Threshold as soon as possible. In two consecutive attacks he discarded a Rabid Elephant and a Childhood Horror to stop the Eater and pump his graveyard.

His Springing Tiger and Werebear where now huge and suddenly a single swing brought the French down to nine. When Moratinos played a Leaf Dancer Labarre knew he needed to do something pretty impressive to get out that mess. His beefed up Thought Eater and Rabid Elephant just wouldn't cut it.

That was his comment when Moratinos sent his whole crew in. He blocked the best he could and fell down to one. His back was now against the wall and he tried to escape with an Aether Burst on the Leaf Dancer.

He dropped an Aven Fisher to create a blocking party and sat back waiting for the next swing. The three incoming creatures were blocked with both players losing a creature and it if Nicolas could find a way to block the flashbacked Chatter of Squirrels token he could safely say he had stem the bleeding (at least until the Dancer came back).

He played a Cephalid Broker and sent the turn to Lucio who again sent his crew in, to trade the token for a creature that chumped the Tiger. When he tried to recast the Dancer Labarre had a Rites of Denial waiting for it.

Still, he needed a way to stop the 5/5 tiger and he found it on Krosan Avenger (with active Threshold). The tide was now officially stopped and Lucio sent his Archer to sure death on the next turn just to force Nicolas to tap mana.

He played a Werebear and a Still Life but the French now also had time to drop creatures. The whispers of the crowd and comments from the Kai/Joost match on the next table only served to accentuate the profound silence in which Labarre carefully considered his options. He had no life to play with and he could afford a single mistake. Lucio also hit a mana pocket, which gave the French some time to breath.

Finally Nicolas felt safe enough to send the Thought Eater over before replacing it with a chump blocker in the trenches: Diligent Farmhand. Another Aven Fisher and Lucio dwindling life totals (he was two swings away from death) gave Nicolas a less worried look while the Spanish rejoiced in actually finding another spell to play.

This time around the Thought Eater and when Lucio Moranitos reached for the Moment's Peace in the graveyard Nicolas Labarre took a deep breath of relief and showed him the Syncopate.

The long tense game was wearing both players out and they really took the time to calm down while sideboarding and shuffling. The crowd was also growing restless after such a drawn out game took the time to discuss a few of the plays or wonder around the beautiful site.

At this point Kai won the other quarterfinal, so Raphaël Lévy warned Nicolas that the French could only come second now and Lucio was quick to agree with him. The shadow of Kai Budde was looming ahead as they took a look at their hands for the second game.

As usual Lucio played a third turn Rites of Spring this time discarding three lands after playing a Zombie Infestation. Nicolas came out in a flashier way with a turn three Call of the Herd, turn four Springing Tiger before Lucio locked out the ground with a Rabid Elephant.

With the ground visibly locked the Thought Eater came in to give Nicolas a way to start hitting Moratinos. The Spanish found a Crypt Creeper and used it to get rid of the Call while Labarre was tapped out.

Nicolas: "You just drew a Terror!"

Probably with a trick up his sleeve, the French sent the whole crew in and got a Ghastly Demise on his Tiger for his trouble. The trick turned out to be a Refresh that turned a double block into major card advantage. He then dropped a Krosan Avenger to keep the pressure while Lucio again drew into a land pocket. His Rabid Elephant was working overtime to stop the flood but he went down to ten and was forced to discard his two remaining cards (both lands) to create a Zombie to block the second swing.

That second swing left him with a creature, at five life facing five creatures. He drew another land and extended his hand. His tournament was over in a way no one deserves: he drew eleven of his seventeen lands.

So now Nicolas faces the daunting task of defeating the undefeatable Kai Budde.