Posted in Event Coverage on September 9, 2001 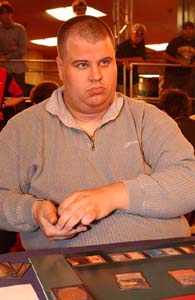 The two A players on Car Acrobatic Team and Phoenix Foundation met, for the second time this weekend, in the semifinals. They had played earlier in the draft portion of the Pro Tour with the Germans offering a draw after each winning the first game, virtually guaranteeing them a spot in the Top 4. Car Acrobatic team took advantage of the gift draw by winning the last round versus Stalking Tiger Hidden Gibbon to finish in third place after the Swiss rounds.

Marco's claim to fame is the second place finish the German National team had in Worlds '99, and winning his countries national title that same year. Forsythe was also on his countr's national team, which won Worlds 2000, and is a member of Car Acrobatic Team, who are the first team ever to make two team Top fours.

Forsythe did not seem very confident in his chance to beat Blume, and it is easy to deduce his reasons. Blume's deck featured such bombs as Tahngarth, Talruum Hero, Prophetic Bolt, Minotaur Illusionist, and Magma Burst. Forsythe's deck does have Plague Spitter and Terminate, but most likely will need draws with good synergy to win the match. Blume's second advantage is his overwhelming removal. Besides his bombs, he also is packing Zap, Bloodfire Infusion, Manacles of Decay, and Bloodfire Dwarf. The

Blume wins the roll, and chooses to play. Forsythe starts the play with two lands, before Blume makes the first creature, a Standard Bearer. Forsythe kills it during his end step with the Night portion of Night/Day. On turn four Forsythe plays a Volcano Imp, and Blume plays a Mire Kavu.

Forsythe draws first blood by swinging with the Imp, followed by playing a Zombie Boa. Mire Kavu swings back dropping Forsythe to seventeen life since Blume plays no swamps. Blume plays an Island, giving both players the full compliment of land. Blume then casts the superstar, Tahngarth.

After his draw step, Forsythe wastes no time moving the Hero into the graveyard with a Terminate, swings for five with the Boa and the Imp, knocking Blume to thirteen, and finishes off his turn by playing his sixth land and a Mire Kavu.

Blume enchants his Mire Kavu with a Squee's Embrace, and sends for six. After playing a sixth land, he passes the turn with four mana untapped. Perhaps he is holding only land.

Forsythe's Zombie Boa and Mire Kavu quickly went for the graveyard when Magma Burst gets kicked to their head. The Volcano Imp hits for two dropping Blume's life total to eleven. Forsythe plays a Tundra Kavu before passing the turn.

Blume certainly should have cast the Magma Burst on his own turn while Forsythe was tapped out, to avoid the possibility of Pollen Remedy. A Pollen Remedy which certainly would have ended the game.

The cards were not with Forsythe in this game though as after the Mire Kavu traded hits with the Imp and the Tundra Kavu. Forsythe plays a Hooded Kavu, only to see his life total dropped to two followed by losing his entire team swept away by Bloodfire Infusion.

Mire Kavu is replayed by Blume and after drawing his card, Forsythe concedes.

After sideboarding in Aura Blast, Forsythe chooses to play in game two. Both players once again get good mana draws with Forsythe summoning a Hooded Kavu on turn three. Marco once again has a good answer with a turn three Galina's Knight.

On their next turns, Forsythe brings out a 4/3 Mire Kavu and Blume brings out a 3/2 Mire Kavu. Then on turn five Forsythe plays a second Mire Kavu. Blume passes the turn with five mana in play. Zombie Boa is brought out to join the Kavu team, but soon it becomes apparent why Blume left five mana untapped. Prophetic Bolt was searching for a good target, and found one in Zombie Boa.

After Impulsing with his removal spell, Blume plays both Disciple of Kangee and Sparring Golem.

Forsythe puts up the hood when he attacks with Hooded Kavu; Blume doesn't fall for it though and decides to trade with his Sparring Golem.

Blume uses Disciple of Kangee to attack with his Mire Kavu dropping Forsythe to seventeen life. Then Blume brings out a Treva's Attendant.

Forsythe decides that now would be a good time to attack with both his Mire Kavus. Blume makes a smart block, neutralizing one Kavu with his Galina's Knight and trading off the other with his newly made Attendant. After the attack Forsythe brings out a Putrid Warrior and an Angelfire Crusader.

Blume plays a kicked Prison Barricade, and decides to stay on the defensive by not using his Disciple of Kangee this turn. Forsythe passes the turn without making a move. Blume plays a Kavu Recluse after a good deal of thinking.

On Forsythe's turn he places Bloodfire Infusion on his own Putrid Warrior and sacrifices it to kill all of the creatures except his own Angelfire Crusader, Mire Kavu, and Blume's Prison Barricade and Galina's Knight. Forsythe plays a Standard Bearer and then says go.

After Blume passes the turn, Forsythe goes on the offensive with his Angelfire Crusader knocking Blume to sixteen and plays a Volcano Imp. 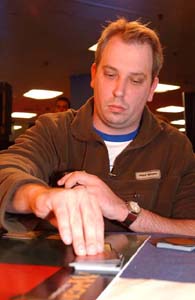 In his second main phase Forsythe plays a Lord of the Undead, leaving him with a very strong board position. With Blume's life total at fourteen and having only a Prison Barricade and a Galina's Knight he needed one of his power spells to show up before the Lord started to bring back his Zombies from the graveyard.

Instead Marco has nothing and once again passes the turn, Forsythe takes the opportunity attacks with the Imp again and returns Zombie Boa to his hand.

Marco does get the bomb he is looking for this time around summoning Tahngarth, Talruum Minotaur. Does Forsythe have Terminate yet again?

No, but he does have Dead Ringers! Of course that means that he has to kill his own Mire Kavu, but anything to get Tahngarth off the board is certainly worth it.

Forsythe continues his assault on Blume with both the Zombie Boa and the Volcano Imp, and after a few chump blocks to hold of the inevitable Forsythe soon finishes Blume off.

Blume remains consistent and chooses for Forsythe to play again. Forsythe decides against running the Aura Blast and sideboards it back out for more offense.

For the third time this match both players get all three colors of necessary mana in this crucial game.

Forsythe leads with a turn three Tundra Kavu, followed by a turn four Putrid Warrior as Blume does nothing but play land.

On turn four Blume has a good answer to the attackers with his own Angelfire Crusader. Forsythe is able to buff up his Putrid Warrior with a Lord of the Undead. Swinging with the Putrid Warrior and using the lose life ability changes the life totals to: Blume 14 Forsythe 19.

Blume brings out Tahngarth for the third time in the match. At this point Johnson's match finishes, evening up the match score, bringing both the cameras and the pressure to these two competitors. While they are moving the cameras Forsythe begins joking about how he wishes Wizards would have printed an 0/5 Coalition Wall or perhaps made Coalition Honor Guard 1/5.

When play resumes Forsythe "Rings" up his own creature and Tahngarth for the second time in the match, keeping alive Car Acrobatic Team's hopes for victory. The Putrid Warrior knocks Blume down to ten, and Forsythe to eighteen.

Blume casts Manacles of Decay on the Warrior, neutralizing it and the Lord of the Undead ability, makes the Warrior unable to block, and hits Forsythe with the Angelfire Crusader. Finally, he plays a Mire Kavu.

Forsythe kicks up a Bog Down to empty Blume's hand. Unfortunately, for Forsythe all he makes Blume discard are three land.

Blume goes to the top of his deck looking for another bomb. After making Putrid Warrior unable to block, he attacks with the Mire Kavu and the Angelfire Crusader. Forsythe decides not to trade his Lord of the Undead with Blume's 3/2 Mire Kavu. Blume pumps the Crusader up to four power to drop Forsythe to nine life.

Forsythe swings back with his Lord of the Undead knocking Blume to eight, and plays an Angelfire Crusader of his own.

Does Blume's deck deliver a bomb this turn?

The answer is yes in a big way. Magma Burst! Kicking it up, Blume knocks over Angelfire Crusader, Forsythe, and the Car Acrobatic Team's chance for back-to-back final appearances.

Posted in Event Coverage on September 9, 2001