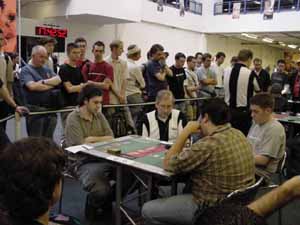 It’s revenge time for the Falklands war. Jose Barbero and Diego Ostrovich invaded England and the best possible way to stop them seemed to just pair them against each other in the quarterfinals. One of them had to win the red mirror though – and that was Diego. He built himself quite a reputation over the last season after he reached the semifinals at the World Championship in Sydney by doing well both in Pro Tours and Grand Prixs. His opponent hails from Italy, Mario Pascoli has one other GP top 8 to his name, Florence, quite some time ago. He did dominate the swiss with his White/Blue deck here in London going 12-1 before conceding to his friend Antonino de Rosa. Diego’s goblins should be a rather unfavorable matchup for Mario as he isn’t even playing with Wing Shards but he wouldn’t have any of that. His record against red men in the swiss was 6-1, beating Diego himself and other gentlemen like John Larkin.

Mario also won the die roll, which is generally very important in this format. Before boarding the white/blue deck really needs to have a Silver Knight to slow the red deck down. After that Complicate and Discombobulate make sure that cards like Siege-Gang Commander and Rorix don’t enter play. But if that Silver Knight doesn’t show up, the control deck can’t really handle the early weenies and has to tap mana in mid game to deal with them which means that the countermagic won’t be there to stop the larger red men. I think that Diego is heavily favored in game 1, but things are slightly worse for him after sideboarding.

Neither player chose to mulligan and Diego had two Goblin Sledders and a Skirk Prospector in play by turn 2. An Eternal Dragon powered up Mario’s turn three Silver Knight. Ostrovich made a Goblin Warchief and attacked, losing a sledder and dealing two points of damage. Pascoli didn’t have the fourth land and just passed the turn. Another Warchief entered play but a Goblin Sharpshooter, also a key card in this matchup, was countered with Complicate. Diego attacked again and lost his Prospector this time. A morph showed up on Mario’s side of the table and he also stifled the comes into play effect from Siege-Gang Commander. Pascoli passed his turn without attacking but he had enough mana untapped to flip over his Exalted Angel. Diego used his two warchiefs to maximum effect and played a Goblin Piledriver, a sledder and a Gempalm Incinerator, just with his three Mountains. Mario had to use Discombobulate to stop the Incinerator as his opponent was getting just too many creatures on the board. That left his angel quite vulnerable. When Diego swung in, the Silver Knight stepped in front of the Piledriver and the morph fought with a Goblin Sledder. Diego was down to 0 cards in hand but didn’t kill the morph. He sacrificed both blocked creatures to get Mario down to exactly 1 life. The angel was unmorphed next turn and got him up to 5 again while the Silver Knight stared down two warchiefs and a sledder. Diego could draw any creature to win on his turn but it wasn’t meant to be. He got Mario down to 1 again but lost a creature. The angel brought him up to 5 and a cycled Decree of Silence countered Diego’s next draw, Goblin Piledriver. The Exalted Angel came in again and suddenly Mario was on 9 life and Eternal Dragon entered the play area. Diego merely drew his card, shrugged and conceded a game that was almost certainly meant to be his. He might have won if he just killed the morph when it blocked a Goblin Sledder but then he could’ve drawn about 30 cards in his deck to win on the following turn, so you can hardly call that a misplay.

Mario obviously felt quite good about winning such a heartbreaker, especially as he is now a lot better equipped to deal with the red deck as his sideboard gives him access to four of each Starlight Invoker and Windborn Muse. Diego on the other hand can bring in two Carbonize to deal with said muses and he also has three Sulfuric Vortex, which can be quite brutal as well. Playing first is a considerable advantage for the Goblin-deck as well. 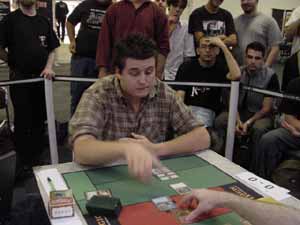 Ostrovich kept but Pascoli had to paris his opening hand but his six were five lands and a Silver Knight, definately a keeper. Diego didn’t have any spells for his first two turns and the knight was the first card played. Diego also didn’t have a third land and Mario drew a second Silver Knight. Ostrovich managed to draw into a third Mountain to stay in the game. Mario just smiled when he drew his card, a Complicate. One knight attacked and he passed the turn. A second Warchief resolved and Diego had drawn the fourth land to protect a Goblin Sharpshooter against a cycled Complicate. Mario chose to just let it resolve as he was quite far ahead on the board. The sharpshooter is a quite powerful tool against the white/blue deck though. It might be a mistake to just let it resolve. It paid when diego summoned two Goblin Goon’s. The second was met with the cycling effect and Mario was up a card. His Silver Knights probably weren’t all that happy to face a sharpshooter, two warchiefs and a goon but the board seemed stabilized as Diego couldn’t attack. Mario’s draw gave him a Discombobulate. A Goblin Sledder resolved and Diego attacked with everything but the Sharpshooter. Knowing that your opponent isn’t playing Wing Shards must be a good feeling.

The pro red creatures blocked a goon and a Warchief and the chief was sacrificed to the sledder to deal one extra point of damage. Diego also activated a Goblin Burrows and dealt six damage to the Italian, who was suddenly no longer in a great position after he thought that the game was over when his two Silver Knights were facing a missed land drop on Diego’s side. His draw gave him an Exalted Angel but Mario seemed afraid to cast it as it meant that he couldn’t Discombobulate whatever Diego might throw at him on his turn. He morphed it into play with enough mana to unmorph thanks to a Temple of the False God. But if he used his Discombobulate, Diego could just sacrifice a sledder and kill the angel with his sharpshooter. Diego dropped the elbow, Sulfuric Vortex. Mario thought for some time but again chose to let it resolve. Another sledder joined the party and the Argentinian sent two sledders, the goon and the warchief in. The morph didn’t even step in front of one of the 1/1 creatures. But that was most likely correct as there were certainly several creatures going to the graveyard this turn and the Sharpshooter could’ve killed the face up angel otherwise. Diego’s team of Goblin Sledder and Goblin Sharpshooter put Mario on 6 life and the Vortex dealt another 2. Akroma, Angel of Wrath would have been game over, but Mario didn’t even have the 8 casting cost creature in his deck. Exalted Angel flew over and reduced Diego to 12. The Argentinian could survive two more turns. Knowing that and losing on his next upkeep, Mario cycled Complicate. He got another one. He cycled that as well and his deck gave him a land. When Diego played a second Sulfuric Vortex on his following turn, Mario just packed it up. You don’t win too often in this format if you miss your third land drop but even that and Silver Knights on turn 2 and 3 couldn’t stop Ostrovich. 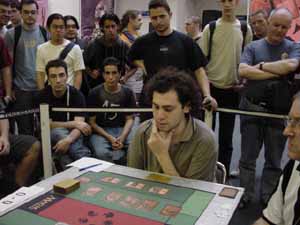 While they were shuffling for game 3, Diego asked Mario to stop drawing Silver Knights but Mario didn’t want to have any of that. He kept his opening hand, but it didn’t have one of the dreaded protection: red creatures. It didn’t matter as it was waiting for him on the top of his deck. Diego had no early drops once again and the Knight came in, followed by a very mysterious morph that turned out to be Exalted Angel when Diego used Carbonize to kill it. Clickslither entered play on the next turn while Mario summoned a Windborn Muse and the Silver Knight kept attacking. Ostrovich made both Goblin Sharpshooter and Skirk Prospector but didn’t have the fifth land and the muse prevented any attacking. Pascoli attacked with his creatures and three Temples of the False God gave him enough mana to create two Angels with his Decree of Justice. Suddenly Mario was the aggressor and Diego was looking for outs. His 10 life meant that he couldn’t take any more attacks. If he had another land, a Siege-Gang Commander in combination with Skirk Prospector and Goblin Sharpshooter might give him at least one more turn to work with. He did have the Siege-Gang but he had to sacrifice his Prospector to get it into play, somewhat limiting his options. He shot the Windborn Muse while feeding goblins to his Clickslither and then took down one of the two angel tokens, which left him with a very large and angry Clickslither and an untapped sharpshooter in play. Mario’s hand at that point was Akrom’s Vengeance and Discombobulate, but he didn’t have a single blue mana source in play. When Diego attacked, the remaining angel token blocked the 11/11 Clickslither, even though Mario was on 16 life. Now the board was suddenly looking quite bad for the italian player and he had to reset with the Vengeance. Diego made both Goblin Sledder and Sulfuric Vortex but Pascoli drew and Akroma showed her wrath once again, clearing the table. But his good fortune found a dead end when his next draw turned out to be a land. Not enough to beat the Siege-Gang Commander that Diego just summoned. Mario beat goblins all weekend but in the end, the little red guys were not to be denied and advanced to the finals.