This match had the pedigree of Dragonmaster playing against the Dragons. Brian Kibler has gained a huge measure of popularity among the fans of the game with his successful use of 6/6 flying creatures on the Pro Tour. Mark Zajdner is fresh off a win against Zvi Mowshowitz with his double Shapeshifter, double Dragon deck. If he hits five mana, Kilnmouth Dragon or Quicksilver Dragon are sure to hit play.

Before the match started, Kibler declared that he would not lose to Dragons… it just wouldn’t happen. They wouldn’t betray their master. Zajdner commented that Kibler’s deck seemed very fast and dangerous, and predicted that the winner of this semifinal match would take the GP Boston crown. 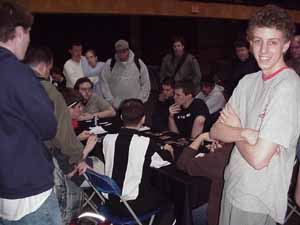 Kibler went first, and both players kept their hands.

Kibler got a quick start, and hit Whipcorder on turn two.

“Who hits the two-drop on turn two?” asked Zajdner.

“Actually, I have seven [two drops]. The better question is who doesn’t hit the three-drop.” Kibler passed his third turn without so much as a morph in play.

Zajdner had a Flamewave Invoker for his own turn three.

On turn four, Kibler Threatened something dangerous, tapping three Plains and a Swamp… was he slow-rolling turn three to hold back a Soldier for Daru Stinger? Nope, he had “just” a Dive Bomber.

Not a lot happened over the next couple of turns… Kibler tapped the Invoker or sent the Dive Bomber… but on Zajdner’s turn five, the Shapeshifter hit play. Kibler immediately smashed it with Cruel Revival.

“Why not save that for my Dragon?”

“So I can attack you.” Kibler untapped and sent. He followed up with a morph and a Daru Stinger with one +1/+1 counter.

For his part, Zajdner played threat after threat. Another flier. A morph. A Kilnmouth Dragon. The board was sliding away from Kibler in a big way. Even worse, Zajdner revealed his morph to be a Master of the Veil, turning Kibler’s Whipcorder upside-down. Worst of all, that Flamewave Invoker from back on turn now had eight mana at his disposal.

Kibler defended himself as best he could, but he was losing life points every turn in the air. A second Whipcorder helped hold the fort, and was joined by a mysterious morph.

Seeing that the board was slipping away, and that his life was at a precarious six, Brian armored up his Dive Bomber with Crown of Suspicion, readying a final strike. Zajdner would have none of the possible out, and showed him Pinpoint Avalanche. Brian found a second swamp and passed the turn.

Flamewave Invoker put Brian on one life, but he showed his morph to be a Skinthinner. The Invoker would not end this game. Sage Aven, on the other hand dug for a source of the final point.

On the last turn of the game, Brian tapped two of Mark’s fliers, but had nothing to say about the Sage Aven. 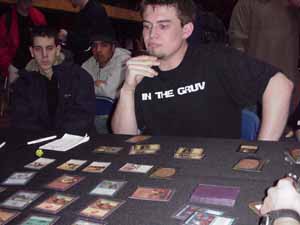 “I WILL NOT lose to Dragons!” exclaimed Kibler.

“Actually,” I commented, “you lost that game to Sage Aven.”

In game two, Kibler got off to a fast start with a second turn White Knight. He was quickly joined by Whipcorder.

Zajdner answered with a morph.

Kibler sent his White Knight, which of course went through unblocked. The board started to get very bad for Zajdner… Kibler followed up with a Daru Stinger with 3 +1/+1 counters on it, revealing Gustcloak Sentinel, Gustcloak Skirmisher, and Gempalm Avenger.

Kibler sent some men, traded his White Knight for the Battering Craghorn, squeezed in four points, and followed up with a morph, rather than any of the three creatures he had revealed the previous turn.

“What could he be?” the Dragonmaster asked.

Zajdner soon found out when he revealed his morph as Skirk Marauder. It was a Skinthinner.

Daru Stinger soon bought it to Pinpoint Avalanche, but was replaced by the Sentinel.

Zajdner had his Kilnmouth Dragon, but commented that he was too far behind in this game. He was right. Kibler just tapped his Dragon and kept sending the troops. Gustcloak Skirmisher hit the board and Zajdner answered with Flamewave Invoker and Sage Aven.

At this point, Kibler had one more attacker than Zajdner had potential defenders, and Mark was on just three life. Brian attacked with everything and cycled Gempalm Avenger to give all soldiers +1/+1 and first strike and it was off to game three.

While shuffling, Kibler noticed a bottle of Poland Spring water in front of him. “Who’s water is this?”

“It’s yours,” proclaimed the table judge. “Your mom left it.”

Zajdner claimed Kibler’s mom was actually rooting for him, but no one else agreed. Kibler, who was very thirsty, greedily sucked down the water as Zajdner chose to play first.

Zajdner opened up game three with a Goblin Taskmaster.

Kibler got a second turn Whipcorder, and was obviously unwilling to trade with Zajdner’s one-drop goblin. 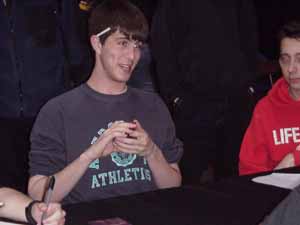 Zajdner started to pull way ahead on the board with a morph, his Flamewave Invoker, and a Mistform Seaswift one after another.

Kibler, though behind numerically, had the advantage in quality with his Whipcorder and a Daru Stinger who had revealed Wingbeat Warrior and Gustcloak Sentinel.

Zajdner’s deck refused to give him a fifth land, and he had to settle for Mistform Wall and Imagecrafter. Kibler’s soldiers soon came out: Wingbeat Warrior, Gustcloak Skirmisher, and Gustcloak Harrier.

Finally, Zajdner found a fifth land and played his Shapeshifter. Kibler got a few hits in, but the inevitable Quicksilver DragonThreatened to win the game.

To make matters worse, after digging out the Dragon, Zajdner’s next turn saw a Lavamancer's Skill on his Mistform Seaswift. Goodbye Gustcloak Harrier.

Kibler untapped and sent four damage in the air. Zajdner’s Skill saved him two points, but it would not be enough. Though it looked like the Lavamancer's Skill was going to decide the game in favor of Zajdner, Kibler had a Crown of Suspicion ready.

“Interesting that you chose to enchant the one toughness creature.”

With the Mistform Seaswift went Zajdner’s chances to win. He could have played the Lavamancer's Skill on his Mistform Wall, but said he feared Kibler’s Swat. In any case, though Zajdner saved himself two points of Gustcloak damage, the Whipcorder that lived was able to hold down Quicksilver Dragon and slide flyers in every turn. A second Whipcorder was academic.