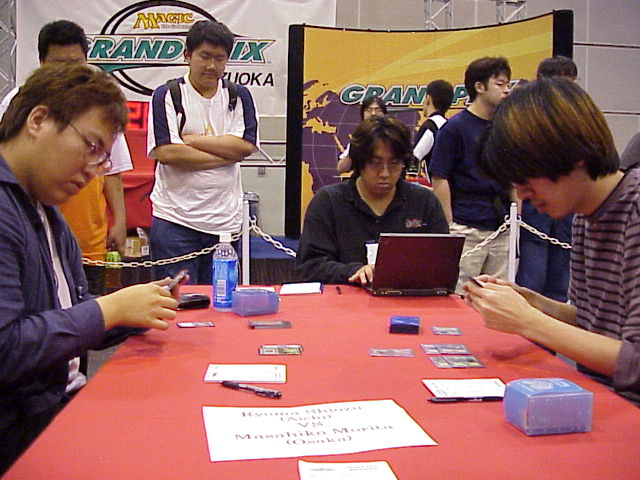 Both Masahiko Morita and Ryoma Shiozu are up-and-coming Japanese players that have shown their skills time and again only to be denied the recognition that comes with winning a major event. Shiozu is on a streak this year, having made the playoffs at Grand Prix - Yokohama and Grand Prix - Kobe. Morita has an extensive resume of his own. A victory here at Shizuoka would crown it nicely.

Morita's faster deck was a favorite in this matchup, but it was far from certain. After all, Shiozu's blue-black deck had just finished upsetting Reiji Ando's green-red, could it do the same to Morita?

Morita got the option to play first, a huge advantage for his fast deck. He opened with Diligent Farmhand. Shiozu Peeked at his hand and didn't like what he saw. Morita busted a turn-three Halberdier. When Shizuo answered with Aven Fisher, Morita doubled up.

However, Shiozu was not caught looking. He untapped and Persuaded the new recruit to join his side. Morita was forced to remove it with Thermal Blast to keep the damage moving. 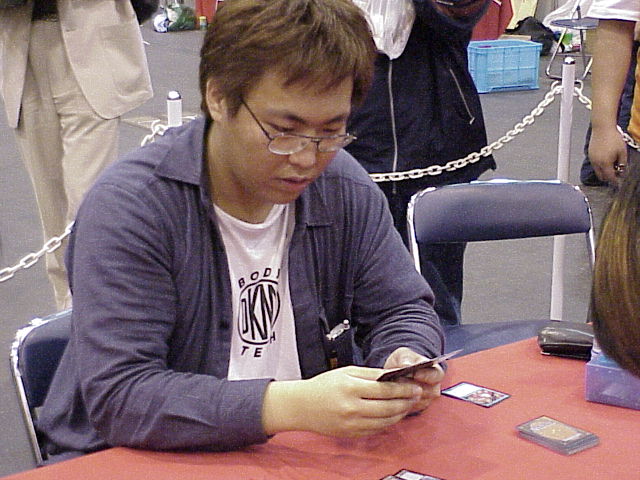 Shiozu's next defender was more than up to the task: Stalking Bloodsucker. The Halberdier swung again. Shiozu double blocked. The Halberdier died, but Flame Burst finished the vampire. Werebear joined Morita's side, as did a squirrel token.

However, Shiozu wasn't done yet. He made Balshan Griffin and waited. Morita, too needed to wait, but for a different reason. He had Rites of Initiation and Demoralize as well as a land. Soon he'd be able to Demoralize, respond with the Rites, hit threshold and swing for the win.

The plan was pushed back a couple of turns when Shiozu removed the token. Morita waited. He took five in the air, and still he held back. Finally he decided to risk it. Shiozu had nothing up his sleeve.

Shiozu was happy to be starting the second game. He peeked at Morita, seeing the Chatter of the Squirrel and Werebear that soon hit the table, as well as Chainflinger and Lithatog. The Chainflinger came down shortly after, and Shiozu hurried to put down an Aven Fisher to stop any shenanigans.

Morita was happy to trade his token for the Fisher, giving the assist to Chainflinger. He added Lithatog to his roster. Balshan Griffin from Shiozu did not impress. The Lithatog swung, and Shiozu pushed the Griffin in the way, forcing Morita to sacrifice two land. He was fine with that. 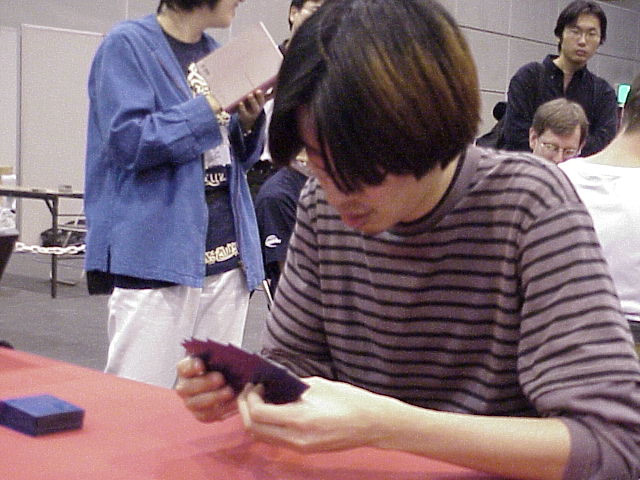 Shiozu wasn't done. He'd bought defenders in bulk. Aven Fisher and Filthy Cur held the fort while Morita decided he liked having lands. He made a Halberdier and passed it back. Shiozu's next play was Zombie Assassin, ready to rain on Lithatog's parade. The Halberdier attacked freely.

Still, Morita seemed to be losing ground. His next play was just Diligent Farmhand as Rampant Growth. Meanwhile Shiozu was Zombifying his Fisher and swinging for two. Morita's reticence was, of course, all part of the plan. Demoralize and Lithatog made their unholy alliance, and even though the Assassin stopped the 'Tog from swinging, Shiozu still fell to three. He used Innocent Blood to axe a token and draw off his Fisher, but the answer was not forthcoming. He extended the hand.