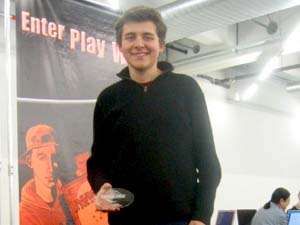 this bracket of the top 8 had four Germans, it was given that one would reach the finals. Reinhard and Stefan are battling for that slot right now. Reinhard won GP Genova a few months ago but Stefan has his first top 8 here. He is also living in Munich and winning a GP in his hometown has to be an additional motivation.

Reinhards deck seems to be superior with Solar Tide, Triskelion and Lodestone Myr along with plenty of artefact removal. Stefan has some power as well with Leonin Sun-Standard and Loxodon Warhammer. Reinhard won the die roll and chose to play first.

Both players kept their hand and did not have any plays before Reinhards turn 3 Krark-Clan Grunt. Stefan answered with Skyhunter Cub which did not block the incoming grunt. Blech used Electrostatic Bolt to deal with the cub but had no other play and more importantly no fourth land. He drew it on his next turn but a freshly summoned Skyhunter Patrol stopped the grunt and Stefan followed it up with a second one on his next turn. Blechs turn 6 Slith Ascendant did not look very impressive, especially when Schwaiger summoned a Nim Replica and used its ability to kill the 1/1 flier. Blech had no play once again with five lands in play. After he attacked with his two fliers, Stefan dropped a Taj-Nar Swordsmith and used it to fetch his Neurok Hoversail, which equipped the smith right away. Reinhard wasted no time and used Shatter to destroy it at the end of turn. Banshees Blade came down on Stefans side of the board and it equipped one of the patrols. Blech finally got his sixth land and summoned his Triskelion. Not as good as Solar Tide, but it can deal with one of the fliers at least. When Stefan moved his equipment from the smith to one of the patrols, Reinhard shot it in response. The blade equipped the other patrol anyway and got a second counter after Reinhards life total was reduced to three. Reinhard drew his card and passed the turn without doing anything. When Stefan attacked with his remaining patrol, Betrayal of Flesh dealt with it and it seemed that Stefan was out of gas as he had no play on his turn while Blech added a Rustmouth Ogre to the board. Two soldier tokens came into play on Schwaigers side of the board and on his turn his Loxodon Warhammer came down on equipped the smith along with the Banshees Blade with two counters. The 7/5 creature came in. Blech blocked with his grunt and sacrificed the Triskelion and two artefact lands to kill the trampling smith with first strike before it dealt damage. Schwaiger moved his warhammer to one of the tokens after combat and passed the turn.

Reinhard used Detonate to deal with the hammer and Stefan had to chump block his incoming Rustmouth Ogre with one of the soldier tokens to keep his blade on the board. He dropped Dead Iron-Sledge and equipped his remaining tokens with it and the blade. Reinhard attacked with his transfixer and the grunt and Stefan took the three damage. Blech summoned a Frogmite after combat and passed the turn. Altars Light hit the frog and the token attacked but Blech had Roar of the Kha to untap his creatures. The grunt blocked the token and both died due to the sledge. Schwaiger had another Raise the Alarm and equipped one of the tokens once again with both artefacts. Blechs next draw was a land and suddenly it looked good for Stefan again. The problem was that he did not realize that he should attack with the equipped token. Instead he just passed the turn. If he attacked, he could have forced Reinhard to trade his transfixer and the ogre for the two soldiers while powering up the blade to +4+4.

Both players drew several lands at this point and no one did anything until Stefan dropped a Slith Bloodletter, which looked very dangerous with plenty of mana left for regeneration and two equipments in play. Blech only drew another Frogmite and the Slith attacked but Stefan forgot to equip it with his blade and that way Reinhards Shatter on the sledge was enough to keep his blocking Frogmite in play. But then Reinhard did not attack with the ogre on his turn. An attack would force Stefan to trade it for both of his tokens and with the blade in play those small 1/1s are quite scary. Schwaiger drew Arrest anyway and it took care of the Rustmouth Ogre. He then equipped his slith with the blade and attacked. The Frogmite chumped and the equipment was moved to a token after combat. Stefan unfortunately did not realize that that kills his slith which took two damage from the frog. He did summon a Disciple of the Vault after combat which threatened to kill Blech on his own as he was still sitting on three life. When a token equipped with the blade killed the Duskworker, Blech took one. Stefan had the kill on the board on the next turn but attacked only with the equipped soldier instead of his whole team and gave Reinhard another turn. But that did not offer any alternatives to Reinhard and he scooped his cards up. Schwaiger could have won the game a lot earlier as he was holding the warhammer all the way since he played the smith and he had plenty of turns where he could drop it safely and either deal three extra damage or kill Reinhard right away.

Once again no one took a mulligan and Blech opened the game with a boarded Viridian Longbow which has to be quite good against Stefans deck with a lot of toughness one creatures and only one artefact removal. A second turn Frogmite attacked on the third turn and Stefan blocked with his Leonin Den-Guard. Reinhard played Roar of the Kha and that dealt with the soldier. The Frogmite kept attacking while Reinhard tried to get a fourth land. Schwaiger had different problems as he seemed to have plenty of lands but no action to with them. He did have a Raise the Alarm to deal with the Frogmite but Reinhard found a mana source in Talisman of Progress. That enabled a Myr Enforcer on the following turn. Stefan played a land and passed the turn but used Blinding Beam to tap the enforcer and a hasty Vulshok Berserker. His next draw gave him Dread-Iron Sledge and it equipped his Skyhunter Cub right away. Reinhards draw was better though. Culling Scales came down and Stefan sighed, looking at his Welding Jar and the one casting cost equipment. He had no play on his turn once again. Reinhard attacked with his team and dropped a Krark-Clan Grunt as well. An Electrostatic Bolt dealt with the Cub as Stefan moved the equipment to a Gold Myr. The scales dealt with the sledge on Reinhards upkeep and a Shatter destroyed the Gold Myr, Schwaigers last blocker. When Blech sacrificed the Scales to his Grunt, he had lethal damage on the board. The second game that Reinhard won mostly on his Culling Scales in this top 8.

Stefan chose to play first and kept his hand after thinking for a few seconds. Reinhard kept his hand immediately and seemed very confident. The first play of the final game was his third turn grunt but Schwaigers Skyhunter Patrol stopped it. Blechs fourth turn once again did not give him the fourth land, but he dropped a Viridian Longbow and a Frogmite. The patrol attacked and a Yotian Soldier stepped up to hold the ground. Reinhard sent both the grunt and the frog and Stefan blocked the artefact creature. Blechs next play was more impressive with Myr Enforcer. Schwaiger played his sixth land and used Arrest to deal with the 4/4 creature. Blech dropped his Culling Scales and passed the turn without attacking. It did not look all that great right now as he had a one casting cost permanent with Viridian Longbow and Stefan only Yotian Soldier and the flier. When Reinhard got rid of the bow with his grunt, Stefan responded to that with Altars Light on the scales and suddenly the board looked pretty bad for Blech. A Vulshok Berseker helped but Schwaigers Slith Bloodletter provided another good blocker. But Blech finally got the land he needed to power up his Solar Tide which killed all three creatures on Stefans side and left the pumped grunt and the berserker in play. Schwaiger came back nicely with a Moriok Scavenger and played the returned Yotian Soldier as well. But it was to no avail. Blech had a Detonate and as it reduced Stefan from five to two and dealt with one of the two needed blockers, that was the game and the match.