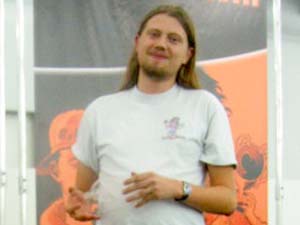 Kapalas from Greece is probably having a good time in Munich, after all he is winning. He ended the swiss in 1st place. Yann Hamon is slowly approaching another Grand Prix victory. But now one of them will have to stop the streak and console himself with only a Top 4 finish.

Both players had access to each other decklists at the table. Yann asks what Georgios think of the matchup. Georgios respond him, saying that it will be a long game, to which Yann nodded his head and seemed to disagree. After all he is playing an aggressive Blue Green tempo deck.

Yann choosed to start. Georgios made the first moves with Bonesplitter and Pyrite Spellbomb, but it was Yann who played the first creature, a Neurok Spy. Georgios's Yotian Soldier that followed was unable to stop it. Georgios also happened to have only Forests so the Pyrite wouldn't stop it either.

The Neurok Spy attacked as expected, and Yann cast Journey of Discovery fetching a Forest and the Mountain. Mana was no longer a problem for him, at the cost of his 4th turn. Georgios also solved his lack of Red mana problem by drawing a Talismann of Indulgence. He played it, used the Red mana to kill the Spy, equipped the Yotian Soldier with the Bonesplitter and attacked.

Georgios seemed to have the board advantage, but Yann put things back on the same level. The Bonesplitter was destroyed with a Turn to Dust, and the mana used to cast a Goblin Replica. Georgios played Hematite Golem but with only a red mana from the Talismann, it didn't look too threatening.

Yann just laid a land and passed. He waited behind 6 mana, that could be used on the end of Georgios turn to activate Stalking Stones or Goblin Replica. Finally Georgios drew a Mountain, and attacked with the Golem. Yann put the Goblin Replica in front of it, and as expected Georgios pumped it using the Mountain. His opponent tried to gain a little time advantage by destroying the Talismann with the Replica, but the remaining 2 untapped lands from the Greek were enough for him to play a Scythe of the Wretched.

The Scythe could made the Yotian Soldier a really annoying 3/4 attacker and blocker, but Yann had something bigger, a Fangren Hunter and a Mask of Memory. Even if Yann had't played the Hunter, Georgios was stuck at 4 lands to Yann's 7. So he took a turn to cast Journey of Discovery. He had to do this because he didn't have enough mana, but by doing it, he put Yann on the driver's seat for the rest of the game.

Now that Yann had a chance to control, he grabbed it. The Hematite Golem joined the other side due to a Domineer, and a Fangren Hunter equipped with the Mask of Memory entered the Red Zone. Georgios opted to chump block with his Yotian, rather than take 4 damage and let Yann draw 2 card. Still, Yann drew two cards, from a Toughtcast and ended his turn by playing a Sinod's Sanctum.
Georgios played a Vulshok Batlemaster. It entered into play and was equipped with the Scythe of the Wretch and the Mask. It attacked and Georgios drew2 cards from the Mask, discarding a Mountain and playing another for his turn. At this time, the table judge noticed that even tough the Mask was equipping one of Georgios creatures, it was Yann who controlled it, so it should be him to draw the cards.

The Judges thought for a long time.

Georgios seemed to know what was coming. They spent this time of deliberation of the judges talking about Extended and the Mana-Belcher deck that Yann Hamon played in New Orleans, since Georgios played the same Pro Tour with the same deck. After a while, it was announced: Georgios Kapalas received a Game Loss.

Georgios accepted his penalty, and Yann pointed that, even if Georgios hadn't drawn the cards, Yann would've drawn 2 from the Batlemaster attack, plus another from his turn, and another 2 from his attack phase. He should've won it anyway.

Georgios started what could be his last game of the Grand Prix with a mulligan, but lead with a first turn Bonesplitter. Yann answered it turn 1 , turn 2 Copper Myr and turn 3 Mask of Memory, equip the Myr, attack and draw 2. Quite an impressive curve. During this, Georgios just played lands.

On his 4th turn, he played a Slith Firewalker that attacked unopposed and also played a Tel-Jilad Chosen to stop the equipped Myr. Yann payed just 1 and drew 2 cards from Thoughtcast. He ignored the growing Firewalker and sent the Chosen back to the hand with a Regress, This cleared the way for another Myr attack which provided two more cards at the cost of a discarded Goblin Replica.

At this moment, the size of the players hands was quite a bit different. Georgios couldn't play the card advantage game anymore. He had to force enough damage through as soon as possible, before Yann had the time to deploy his hand. He equipped the Firewalker with Bonesplitter and attacked. After combat it was already a respectable 5/3, but Yann still had the . Georgios replayed the Chosen and passed.

Yann tapped his lands for a Fangren Hunter, leaving a Copper Myr untapped. He couldn't use his Bomb now, and Georgios attacked again with the Firewalker. It was blocked with the 4/4 Hunter and Yann destroyed the Bonesplitter with the green mana and a Turn to Dust. After combat, the Hunter also died due to a Pyrite Spellbomb, but Georgios was out of fuel.

Yann played a huge threat in the form of Tel-Jilad Trolls. Georgios had no other creature to play and just 4 lands and Scythe of the Wretched that couldn't equip the Chosen. A Turn to Dust that destroyed the Mask, came too late. The damages were already made. Yann had no problem in finishing the game. He attacked with the Trolls, played another Big green creature and was still safe behind an and an Override on his hand. No way out for Georgios Kapalas.