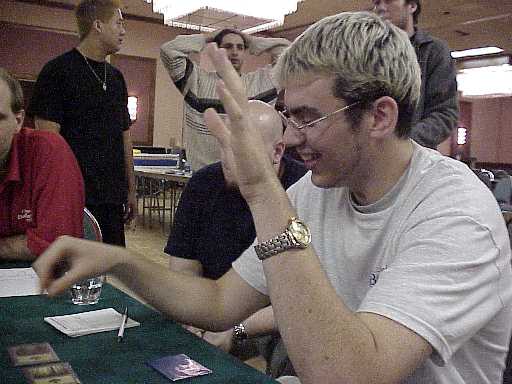 Buckle your seatbelts, folks, this finals was wild. After surviving a 2-hour marathon game with Dan Clegg, Chris Benafel advanced to the finals to take on Matt Vienneau. Vienneau had been running hot all weekend, having lost only one match. Everyone knows Benafel has had a great year, finishing 2nd at both PT LA, and US Nationals, but he hasn't actually won any events. And he's really starting to get tired of finishing second. Vienneau spotted this sore spot immediately and kept harping on it for the entire match, turning to me and sarcastically explaining "He has this thing about finishing 2nd" as soon as I sat down to cover the match. Benafel exploded with "I really want to win! Despite trying to lose that match to Clegg ... why did I play so badly?" He then followed up with "Wow I don't want to come in second ... oh ... PLEASE!" Benafel appears to be a very emotional player, but one can't help but wonder if it's all an act. Benafel can appear happy, sad, frustrated, excited, mocking, or genuine depending on the situation and his opponent. Vienneau doesn't even have second places performances to dwell on. After posting a Top 8 at Pro Tour Atlanta way back in 1996, Vienneau has only about a half dozen Top 32's (but no Top 16s) to show for all the PTs since then. Vienneau did beat Benafel in round 11, thereby clinching his own berth in the Top 8.

Vienneau has a very good black/red deck plus one green card: Darigaaz, the Igniter. Interestingly, though, Vienneau started sideboarding out the Dragon and his two Forests for 2 Maniacal Rages and a Swamp in the semi-finals and did that for all the sideboarded finals games as well. Benafel was being fed by Vienneau during the draft and drafted a green/white deck that splashed a touch of red. He actually drafted green/white all day and Vienneau knew this when he sat down for the final draft. Since Vienneau likes black and red the best anyway, they got along reasonably well. There was one tense moment when Vienneau started to get scared because Ben Romig was drafting black/red on his right and so Vienneau took an Explosive Growth that otherwise would have gone straight into Benafel's deck. Eventually, though, Romig concentrated on black/blue and Vienneau got plenty of black and red.

Benafel played Benalish Trapper, Sparring Golem, and Meteor Storm before Vienneau cast his first spell in game 1 - a Firescreamer. The problem was that Vienneau had one Forest and three Swamps in play, but a hand full mostly of red cards. Benafel put on his excited personality, laughing and asking "Weren't you playing red?" The trash talk flew that way the whole match. Neither player took it seriously. Instead they were just having fun trying to best each other and impress the crowd. Benafel played a turn 5 Angel of Mercy, which Vienneau eventually removed with Soul Burn, but not before he was within range of Meteor Storm death.

Benafel mulliganed twice before game 2, and Vienneau took full advantage playing turn 2 Shivan Zombie and enchanting it with Maniacal Rage on turn 3. Vienneau actually managed to do 20 points of damage by his fifth turn.

Before the third game of this best 3 out of 5 series, Benafel announced "I'm going to beat you for Ryan ... I dedicate this victory to Ryan Fuller." Vienneau responded "So you're going to bribe me?" Benafel had to mulligan again before game 3. Gary Wise walked over about then and commented in mock horror "Oh no! The Vienneau Shuffle!? You're a dead man Benafel." Benafel came out pretty strong after his mulligan. He played Nomadic Elf, Llanowar Knight, Razorfoot Griffin, and a second Razorfoot Griffin over the first 5 turns. Vienneau answered with Shivan Zombie, Slimy Kavu (which traded with the Nomadic Elf), Phyrexian Slayer, and then Maniacal Rage on the pro-white Zombie. 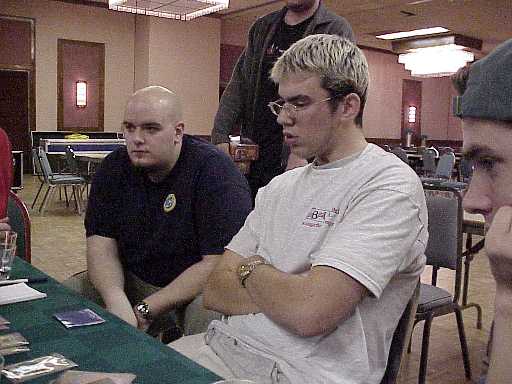 Vienneau was at 8 and Benafel was at 10 when the game got really interesting. Benafel had 8-power worth of creatures in play to Vienneau's 6. Vienneau thought for a while and then brought it with everyone, dropping Benafel to 4. Vienneau played Plague Spitter so it could block one of Benafel's attackers. Basically, Benafel could put Vienneau at 1 with the cards on the table, but if he didn't have either a non-white blocker for the Zombie or some other trick, Vienneau's play looked good. Benafel thought for a long time, leaning back and trying to look helpless and frustrated. After about 10 minutes, he leaned forward and very rapidly attacked with 2 Griffins and Llanowar Knight (leaving Rampant Elephant back to block the Spitter and putting Vienneau at 2), played Angel of Mercy (gaining 3 life up to 7), and said done. On Vienneau's upkeep both players took one from the Spitter (making it 1 to 6). Vienneau drew a land and then looked at the Soul Burn in his hand and then Zombie, added up the damage, and saw that the game was his. "You're at 6, right?" With a cocky smirk, Vienneau attacked with everything. Benafel quickly put Rampant Elephant in front of Plague Spitter and Angel of Mercy in front of the Slayer.

Vienneau accidentally killed himself with his own Plague Spitter! All Vienneau had to do was Soul Burn before the attack phase. Or he could just not attack with Plague Spitter. Vienneau quickly scooped up his cards commenting "I got cocky." Benafel figured out what had happened immediately saying, dumbstruck, "You had a Soul Burn?! Show me the Soul Burn!" Benafel reached for Vienneau's hand in disbelief and Vienneau revealed the incriminating evidence to everyone. Even Benafel feel silent for a few moments, but he soon went into full talking mode: "I can't believe you just did that!" Just like Vienneau wouldn't let him forget that he keeps finishing 2nd, so too Benafel was not going to let Vienneau forget about this.

Did the 10-minute turn throw Vienneau off? Or maybe the 2 hours he had to wait for the Clegg marathon to end?

Vienneau: "I can't let it get to me," shrugged, and kept shuffling. 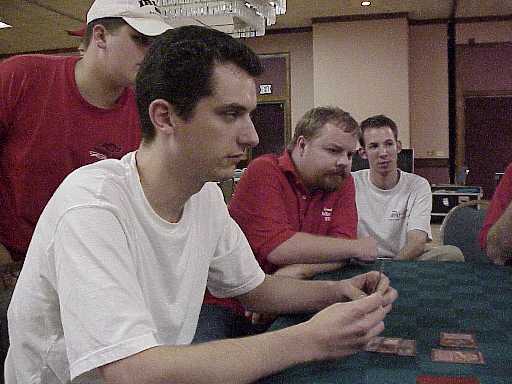 Benafel had to mulligan yet again before game 4. He was so disgusted with his deck (or was he feigning disgust?) that he desleeved it before shuffling it up and drawing 6 cards. Vienneau had the turn 2 Zombie, turn 3 Maniacal Rage draw again and Benafel never drew a third land. Thornscape Apprentice fought valiantly to slow Vienneau down, but Vienneau Soul Burned it for 1, Agonizing Demised Benafel's other creature, and evened the match at 2.

Vienneau: "I guess I should have played that third game a little differently." 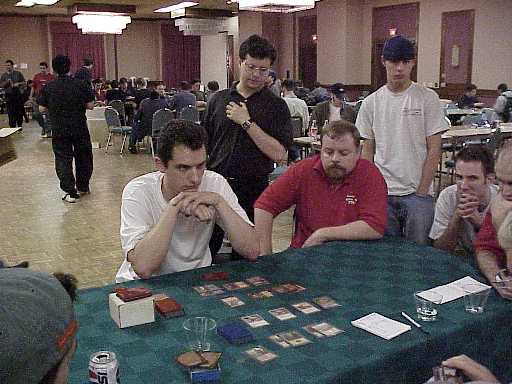 Historically, all the big mistakes that have happened in Magic finals have cost mistake-maker the title. Borer's famous "Do you have any fast effects?" in Atlanta, Justice's double-Consult at Worlds '96, Dave Mills in L.A. ... and Chicago, and Bob Maher at Worlds this past summer all made mistakes and walked away without titles. Mistakes likes Vienneau's always matter. Vienneau offered a prize money split and Benafel exploded again - "I don't care about the money! I just want to win!" Someone was going to have their demons exorcised when this game ended ...

Benafel led with a turn 2 Benalish Trapper. Vienneau played turn 3 Plague Spitter. Benafel played a turn 4 Glimmering Angel and then in the middle of Vienneau's attack phase (with the Spitter) Benafel asked "Wanna split? Play for the points?" Vienneau answered "sure," they shook, and then Benafel took 2. It seemed like a moment of begrudging respect from two tired warriors. Vienneau then played a Phyrexian Slayer and Benafel played a Sparring Golem.

Vienneau's next turn looked a little bit weird as he played Maniacal Rage on his Slayer knowing full well that it would just get tapped by Benalish Trapper. On his next turn, though, everyone found out what Vienneau was up to - after attacking with Plague Spitter, Vienneau Soul Burned his own Spitter (for 3 to get around any potential Explosive Growths), sending it to the graveyard so it would deal one more damage to all creatures and players. That wiped out Benafel's entire team! Vienneau's 4/4 Slayer survived while Benafel lost the Trapper, Glimmering Angel, and Sparring Golem. After one more attack from the 4/4 Slayer Benafel drew yet another land, threw down his hand of cards, and extended his hand to congratulate Grand Prix Dallas champion Matt Vienneau.