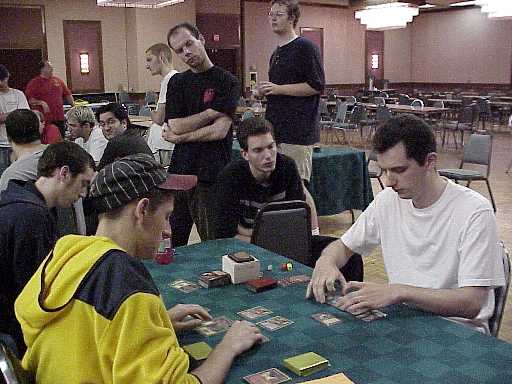 Matt Vienneau and Matt Linde had perhaps the two best decks in the Top 8. Linde is no stranger to beatdown decks. In 1998, Linde won US Nationals with an aggressive white weenie deck and he made Top 8 at the 1999 World Championships in Japan with a Stompy deck. In this Top 8 draft, Linde was playing an aggressive Red/Green deck with quick creatures, multiple Scorching Lavas, and creature enhancers like Aggressive Urge. Matt Vienneau was also playing an aggressive deck, using a Black/Red deck with a splash of Green for Darigaaz the Igniter.

Linde, while a newcomer compared to Vienneau and his top 8 at Pro Tour - Atlanta, had accomplished alot in his short time on the Pro Tour and it was bound to be a tough fight.

Matt Vienneau won the die roll and chose to play first. Vienneau got off to a pretty quick start with a third turn Slimy Kavu and a fourth turn Phyrexian Slayer. Linde, meanwhile, was having mana problems. He had a Mountain in play and was discarding, first an Aggressive Urge (which is an odd choice since the cantrip could help him draw additional land if he happened to draw a Forest) and a Kavu Chameleon. Linde eventually found another Mountain and was able to Scorching Lava the Phyrexian Slayer and drew a Forest on the next turn to allow him to play a Pincer Spider. That wasn't about to stop Vienneau, however. Vienneau Recovered his Phyrexian Slayer and cast a Shivan Zombie to join his growing horde of attackers. Not only that, but Vienneau had a Soul Burn for the Pincer Spider to prevent it from blocking and killing any of his creatures. Linde tried to clear the board with Breath of Darigaaz, but that didn't take care of Vienneau's flier. Matt Vienneau eventually finished Linde off with the Slayer along with an Agonizing Demise with the kicker. 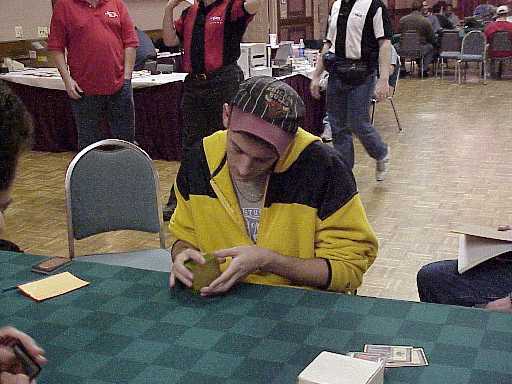 Linde chose to play first and was hoping to have a bit better luck this game, after suffering from difficulty drawing land in the first game. While he had land this time, Linde's didn't have the most aggressive draw, playing his first creature, a Llanowar Cavalry, on the fourth turn. Vienneau, however, came out swinging. He cast a third turn Kavu Scout and put a Maniacal Rage on it on the fourth turn. Linde was tapped out, so he was unable to Scorching Lava in response and the big Scout became a big problem. Over the course of the next few turns, Vienneau was able to Smoldering Tar a Kavu Chameleon and Tribal Flames a Slimy Kavu and keep attacking with the Kavu Scout, reducing Linde's life total to 12 life. Linde was eventually able to double block the Maniacal Raged creature with a Viashino Grappler and a Kavu Climber to kill it, but at the cost of both of his creatures. Vienneau played a Power Armor and two additional ground creatures while Linde played a Serpentine Kavu. Linde then Aggressive Urged his Kavu, used Breath of Darigaaz to kill both of Vienneau's creatures and attacked Vienneau for 5. After another turn of attacking, Linde was ready to attack for the win, but Vienneau top decked a Soul Burn and finished Linde off.