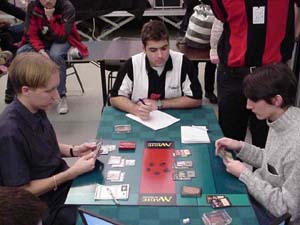 Florent Jeudon vs. Mattias JorstedtAs the players were checking their decklists, Jorstedt noticed that Jeudon had listed Shadowblood Ridges on his decklist and not the Shadowblood Eggs he was actually playing. After a brief conference the judges issued a warning but decided that as the error had been missed for the first match and judges hadn't picked up on the problem during the decklist checking no card replacement would be carried out.

Florent won the roll and let Jorstedt go first. Jorstedt's turn two Phantom Whelp started proceedings and the beatings commenced on turn three. He continued to beat with the Whelp but decided to play a Dreamwinder the next turn instead of replaying the dog. Jeudon continued to play land but didn't do anything else until a turn five Chainer, Dementia Master. That made Jorstedt pause and think hard about what to do. He decided to attack with the Barbarian Lunatic he'd cast the previous turn and when jeudon blocked it legend died to a saced looney. A Morbid Hunger from Jeudon put paid to the Dreamwinder and the table was clear with the life totals at 20-15.

Florent decided to tap out for Mindslicer with Seton's Desire to create a formidable 6/5 beast. Jorstedt decided to flash back a Deep Analysis to go looking for answers but all he could come up with was a Possessed Barbarian that couldn't afford to block on the next turn so the Swede took six damage. Florent added to his problems by summoning a Crashing Centaur.

Jorstedt added Crackling Club to his Barbararian and swung for four evening out the scores at eleven before laying a Phantom Whelp and a Halberdier. After a long think Jeudon attacked with both his creatures and used a Muscle Burst to make sure that both blockers died. The casting of a Faceless Butcher to steal the Barbarian meant Jorstedt needed a very fast reply to save himself in the next turn.

Things looked bad when he merely passed the turn and worse when Florent cast a Misshapen Fiend, but a Fiery Temper in response killed the Butcher enabling him to get his Barbarian back and then Florent thought long and hard before deciding which card to steal from his hand. He eventually chose the Sonic Seizure and then attacked with the Mindslicer which did another unblocked six damage. Gravedigger added to Jorstedt's problems as he knew the Faceless Butcher would be coming back in the next turn. A combination of Threshold, Pardic Arsonist and Firebolt removed the Mindslicer which also disposed of the Butcher in the Frenchman's hand and reduced both players to topdeck mode.

Jeudon attacked with the Misshapen Fiend which was blocked and killed by the Possessed Barbarian giving the Frenchman threshold and returning Sonic Seizure to Jorstedt's hand. Jeudon then played his second Seton's Desire on the Gravedigger and passed the turn.

With the scores at 10-5 Jorstedt had started pinging with his Psionic Gifted Barbarian at the end of the Frenchman's turn but had to use both cards in his hand and the pinger to kill the pumped black creature. It made little difference however as Jeudon attacked with the Centaur and activated it to trample over for the win.

Jorstedt decided to play first mulligans and went with the resulting six-card hand. Turn one Shadowblood Egg allowed a drawn card and turn two Misshapen Fiend for Jeudon, which he used to take a Deep Analysis before casting a Cabal Torturer. Jeudon nibbled away with his two black weenies for a couple of turns before a Thermal Blast saw off the Fiend and the Swede could cast Deep Analysis.

Gravdigger brought back the Misshapen Fiend for Jeudon and he continued to attack every turn with the Cabal Torturer. Jorstedt cast Pulsating Illusion and used its ability to cast Fiery Temper with Madness and dispose of the Torturer. During Jeudon's next turn the Fiend is recast and stole a Thermal Blast, the Gravedigger attacked for two damage and a Seton's Scout was summoned.

Jorstedt decided to flashback Deep Analysis on his turn and went down to nine life but couldn't find a creature to cast and so had to pass. On his turn Jeudon attacked with all three of his creatures. The Illusion was pumped as a blocker and the Gravedigger died with the Swede taking two damage to go to 7–20.

Suddenly Jeudon's deck seemed to go off and there were five creatures on the board including a Faceless Butcher, a Mindslicer and an Elephant Ambush token. After the Painbringer had killed one of the Swede's creatures and the Butcher had stolen the other then there were no blockers and no return for Jorstedt.

The prize for last years European Netrunner champion is a final match against the German Juggernaut himself! Lucky Florent ;-)