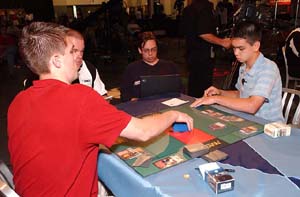 The two players seemed much more relaxed as this second round of the Top 8 began. The chatter went through all kinds of topics.

"I'm going to draw," Mitch announced. He had won the choice and had to repeat it twice, table judge Mike Goodman either hadn't heard him or didn't believe the choice.

Kyle decided to mulligan his seven cards back into his deck. It is a common belief that in the Astral Slide mirror you might want to aggressively mulligan to try and get a Lightning Rift, and it had paid off for Kyle this time. His six card hand had the Rift in it.

Kyle played his Lightning Rift on turn two, and followed it up with the first creature of the match. "Morph," he called it, although everyone at the table knew it was Exalted Angel. Face up or face down she's pretty recognizable.

Kyle played out the second piece of the Astral Slide combo first, with Astral Slide joining the Lightning Rift on his side of the table. Mitch managed to find another Lightning Rift, meaning that any cycling done for the rest of the game would send damage flying all around the table.

The players' life totals dwindled rapidly at this point. Cards cycled by both players resulted in Mitch suffering two points of damage and Kyle taking four. Kyle held a narrow life total lead, fourteen to eight, but Mitch had an extra Lightning Rift.

Mitch was able at this point to get a Teroh's Faithful onto the table, giving him a life total lead that he would not relinquish. Cycling two copies of Renewed Faith allowed him to Rift the game into his hands, dealing the final eight damage to Kyle.

"You gonna be drawing or playing," Mitch asked during the shuffling period. The players were told to sideboard and shuffle, but not to begin playing until they received the signal from Ken Krouner. 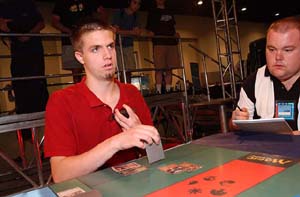 The two players shuffled up for Game 2 and with the blessing of Ken Krouner finally got it underway.

Mitch played a turn three morph creature, which everyone again knew to be Exalted Angel. Kyle played an Auramancer, getting back the Lightning Rift he had lost earlier in the game to Ray of Revelation. He lost it a second time immediately, as the Ray of Revelation got flashed back from the yard.

"I'll cycle Secluded Steppe," Kyle stated, tapping a Plains and a Forest. The Forest was unnecessary though and he took a mana burn from the careless tapping. The Auramancer was slid out of play and when it returned Kyle tried to take a Tranquil Thicket from his graveyard. The pressure appeared to be getting to him, as he had confused the Auramancer for a Cartographer.

The game degenerated at this point to a large staring contest between Exalted Angels. Mitch was able to get Kyle down to one life with his Exalted Angels but Kyle played one of his own to stabilize. Life totals were thirty-two to five after Kyle's Angel swung into the Red Zone, and Kyle played out a second Astral Slide.

Kyle was able to use his two Astral Slides to keep Mitch's Angels from actually getting through the Red Zone. His hand was a little light on cyclers though after he cycled the Tranquil Thicket he was holding. Down to only a Krosan Tusker in hand Kyle surveyed his options when the Exalted Angels attacked again. 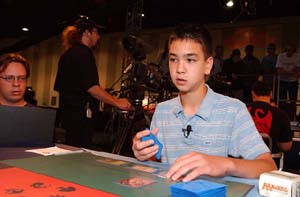 "I take no damage," he stated after all of the combat tricks had been completed. Somehow the Exalted Angels were either removed from combat by Astral Slide or blocked by a different Exalted Angel. It seemed that the Exalted Angel party was getting rather large.

"Should he be searching?" Mitch asked the judges. Kyle had cycled a Krosan Tusker and then used the ability of both Slides and the Lightning Rift before searching for a land, Mitch was wondering why it was that the Krosan Tusker ability wasn't the last one on the stack and therefore the first one off.

Table judge Mike Goodman straightened out the confusion. "They are all his triggered abilities, he can choose the order in which they occur," Goodman explained.

"How many cards in hand," Mitch inquired. After hearing the answer, six cards, he proceeded to riffle through Kyle's graveyard. "He has to have a cycler," Mitch mused. Despite that belief he took his two Nantuko Monasteries, his Exalted Angel and Cartographer, and turned them sideways.

Kyle did not have a cycler, and the game ended. "Good game," Kyle offered as he extended his hand.