Semifinals: and You'll Miss It

he semifinals displayed a clash of Time Spiral Block Tribes. Lachmann/Van Lunen held fast to the turbo-Sliver strategy they've followed for seven out of eight drafts this weekend, while Kaneko/Taru took the road less traveled by: turbo-Thallids. The Top 4 matches would still be one game each, so each team had to come out swinging. Genki Taru controls the actual Thallids in his green-white-black deck, while Masami Kaneko supports him with blue-black.

Thallid players Kaneko and Taru were hoping to stall for the long game, where their Thallids' natural token generation would create a sea of Saprolings to be sacrificed for all kinds of effects. The Thallids' Saproling tokens could also provide a ready-made creature base to crank Sprout Swarm into high gear.

In contrast, Sliver players Lachmann and Van Lunen were hoping to win explosively with a horde of synergistic Slivers. In some of the duo's previous sliver builds, covered in earlier rounds, they have sometimes pursued a slower, more controlling build where Spitting Sliver, Synchronous Sliver and Quilled Sliver work together to create an inexorable wall of first strike and pinging that opposing players couldn't contain. In other previous rounds, they have collected a blisteringly fast assortment of Virulent Slivers and Two-Headed Slivers that use poison counters to end games almost before they've begun. It's interesting to compare the different sides of their Sliver strategy across different rounds to see how Lachmann and Van Lunen were able to find success with a variety of different Sliver archetypes.

Since teams only play opponents from their own four-team draft pods, teams are strategizing against each other, getting reads, and making counter-ploys long before the first land is played.

The Japanese won the toss and began the game with just lands. Jacob Van Lunen had the first play-a very dangerous Virulent Sliver. Genki Taru played a turn-two Deathspore Thallid that in the long-term could convert a vast Saproling-generating machine into a vast Sliver-killing machine. End-of-turn Piracy Charm from Lachman ended the Deathspore dream.

On his second turn, Van Lunen widened onlookers' eyeballs with a second Virulent Sliver, sending the first one in for 1 damage and 2 poison counters. But taking the bad with the good, Van Lunen had no second land and Lachmann had no turn-two play.

On turn three, Taru completed the Plains-Forest-Swamp he would need, and summoned infantryman Thallid Germinator. Kaneko conferred with his teammate, very concerned about the double Virulent opening, and played the 1/2 Merfolk Thaumaturgist-a second creature that could block the Virulent Slivers.

On his turn three, Van Lunen found his second Forest and curved into a Spinneret Sliver. The Japanese were tapped out, but they controlled two bigger-than-1/1 blockers. It would be hard for the Sliver players to kill both blockers with removal spells in time to send the Virulent Slivers through. But because this is Two-Headed Giant, Van Lunen's teammate produced the answer: a totally savage Shadow Sliver. A devastating play, the newcomer sent both Virulent Slivers into the shadow world, then into the red zone for 2 damage and 4 poison counters, making the score 30 - 27 (+6 poison.)

On turn four, Genki Taru made a Pallid Mycoderm while Kaneko stayed untapped with

. Since Kaneko hadn't killed the Shadow Sliver right away, the Japanese were clearly relying on him to come through with a combat-phase removal spell on Shadow Sliver, bringing the Virulent slivers back into the real world and into the Thallids' waiting pseudopods. Was this the time for Vedalken Aethermage?

He had it, producing an Ovinize on Shadow Sliver to remove all its abilities and taking Shadow away from every other sliver. Lachmann grinned and responded with Momentary Blink! Blinking the Shadow Sliver fizzled the Ovinize and brought Shadow Sliver immediately back, keeping all the other attacking slivers safely in the shadows. Those attackers dealt a measly 4 damage and a whopping 9 poison counters, defeating Taru and Kaneko, 30 - 23 (+15 Poison) 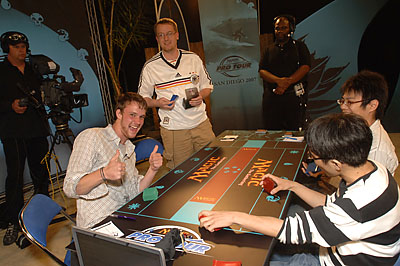 Chris Lachmann and Jacob Van Lunen defeated Masami Kaneko and Genki Taru so quickly that by the time coverage photographer Craig Gibson arrived on his usual rounds, the action was already over.