Semifinals: Mulligan to What?

uis Scott-Vargas is in his second Nationals Top 8 in a row, representing his team again at Worlds this year after winning against Craig Krempels in the Quarterfinals. Bennett, on the other hand, is in his first major event with a solid performance, though he has played at the Nationals for the Junior Super Series (now called the Magic Scholarship Series).

Quickly jumping out to a lead on mana Bennett made two Birds of Paradise before playing a Loxodon Hierarch. Scott-Vargas, in contrast, simply made three land drops before finding a Wall of Roots just in time to start blocking the 4/4 Elephant. A second Hierarch, however, earned a Rune Snag from Scott-Vargas, placing a -0/-1 counter on his Wall. Bennett missed the fact that his original 4/4 pachyderm would be lethal for the 0/4 and declined to attack. When he noticed the play on his opponent's turn, he chastised himself, but it was too late as LSV had already played a second Wall, this one a 0/5. Bennett matched the play on his turn with a Wall of his own. 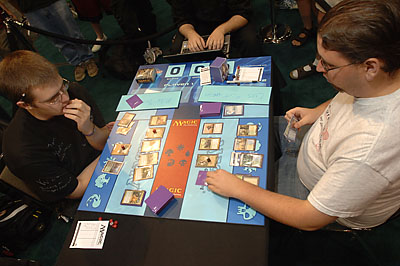 LSV considered his options, then made a Crovax, Ascendant Hero. Bennett, who's Hierarch was now a 5/5 thanks to Crovax, attacked. LSV blocked with his legend, stacked damage, then paid a life to return the 4/4 (and leave Hierarch similarly sized). With damage on the stack Bennett attempted a Chord of Calling for two, which received tacit approval from Scott-Vargas. Saffi Eriksdotter was the tutor target, and Bennett used her to target his Hierarch, returning it to play. Luis simply replayed his Crovax.

Bennett attempted a Ghost Council, which was met by a second Rune Snag. Scott-Vargas went on the offensive with his Crovax, putting the life totals at 19-all after he played a post-combat Hierarch of his own. Luis's board stood at seven land, two Wall of Roots with three counters apiece, the Hierarch, and Crovax. Bennett used his turn to make a board of four lands, Withered Wretch, Saffi, Hierarch, and a Wall of Roots with two counters. Both players were living off the top of their decks with a card in hand each, and Crovax happily bounced back into the Red Zone for LSV, making things 17-14 in his favor.

A third Hierarch from Bennett netted him 4 more life, and the 5/5 charged into one of Scott-Vargas's Walls. LSV had no play on his turn, and Bennett made an Essence Warden. After correcting him for tapping his Godless Shrine to play it, Scott-Vargas allowed it into play, then pointed at his Crovax. "It dies," he said, indicating the -1/-1 effect. A Bennett Glittering Wish was met by a third Rune Snag, and Scott-Vargas looked to be taking control as he played a morph.

The two players played draw-go while Bennett ground his opponent's graveyard to zero with his Withered Wretch. Scott-Vargas finally made a Teferi at the end of his opponent's turn, and things started to look interesting. The extra body on the ground gave him enough breathing room to start attacking with his Crovax again, making the game 17-14 in his favor. Bennett was falling further behind and the fact he was playing Wall of Roots while his opponent was playing Compulsive Researches wasn't helping. An end of turn (thanks to Teferi) Vesuvan Shapeshifter face up copied a Hierarch for LSV and when he attacked with the beatstick again, Bennett finally opted to block with a Loxodon Hierarch.

A flurry of Remands temporarily halted a number of spells on Bennett's turn, including a Castigate and a Crypt Champion. The Champion threatened to allow Bennett to combo off, but it also tapped him very low on mana. LSV used his turn to Pickles lock his opponent for the following two turns, first by flipping up Brine Elemental then by copying it with Shapeshifter, and showed a third Remand for Mike's attempt at the combo again. Unfortunately for Luis, Bennett had enough Wall of Roots to be able to keep playing the Champion, provided he drew some black mana.

It wasn't to be, however, as LSV had a Venser, Shaper Savant to bounce one of his opponent's blockers, forcing him to chump with too many Walls and handing Scott-Vargas the first game. 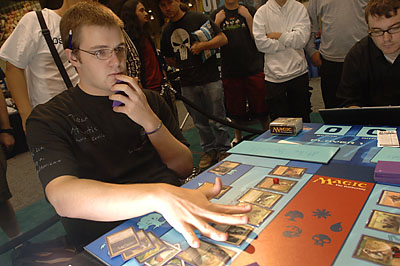 Bennett goes into the tank.

Bennett made a solid turn-two play in Dark Confidant to start the second game, but Scott-Vargas had a trump in Spell Snare. When Bennett tried for a Glittering Wish a few turns later, Luis showed he had the second copy of the spell as well. A turn-three Hierarch met a Rune Snag, and things weren't starting off very well for Mike Bennett. The only nonland card he had managed to resolve was the Wall of Roots which allowed him to attempt the turn-three Hierarch. Scott-Vargas made a morph which attacked the following turn into Bennett's now 0/3 Wall. Bennett shrugged and blocked, but Scott-Vargas showed he wasn't bluffing post-combat with a Serrated Arrows.

Bennett binned his Wall, then used an Extirpate on the end of turn to stop Scott-Vargas's Rune Snags. He couldn't follow up with any threats, however, adding another Wall of Roots to the board. Vargas played a Compulsive Research which Bennett responded to with Slaughter Pact targeting Scott-Vargas's morph. Luis tapped out to reveal… Willbender! That sent the effect back to Bennett's Wall, and he was forced to pay for his Pact upkeep effect with the last counter on his Gemstone Mine, leaving him with just two lands in play. A Teferi from Vargas followed by a Chord for six prompted a concession from his land-light opponent.

In between games, an announcement from the Side Event area informed the players that Bennett had won a raffle prize, potentially an oversized card used in the Game of the Year festivities the prior evening as part of Magic Weekend. Bennett, who had participated in the gigantic event starring Alan Comer and Richard Garfield, had his name automatically entered into the raffle drawing for playing. Bennett was truly making the most of his Magic Weekend after using a meatgrinder tournament to earn himself a spot on the American National Team.

"Can I go get that?" Bennett asked.

Head Judge Scott Marshall intervened: "It will be there when you're finished."

Mike opted to take a mulligan for the third game, his back up against the wall. He kept those six and opened on a Birds of Paradise. Scott-Vargas had only a Forest, meaning a Dark Confidant from Michael would be free to resolve. Sure enough, the 2/1 Invitational card came down, and all Luis could do was play a Farseek to ramp himself up to Serrated Arrows mana, nabbing a Breeding Pool.

An attack from the Confidant made things 18-16 in Scott-Vargas's favor (thanks to a Glittering Wish revealed by Confidant and a dual land put into play untapped). Bennett's post-combat play was Shimian Specter, and that card looked to be very problematic for Luis, who simply played a Compulsive Research. The ensuing attack dropped him to 14, and Bennett saw a hand of Rune Snag, Chord of Calling, Venser, Shaper Savant, Serrated Arrows, and three lands. Bennett opted to take the Arrows, ensuring the safety of his attack force for the time being, then used Castigate to nab Venser. His Glittering Wish got him a Castigate, and he passed the turn.

Things were not looking good for Scott-Vargas, and he spent his turn on a Wall of Roots and a land drop. Bennett drew for the turn after revealing for Bob and moved only his Specter into the Red Zone. LSV had a Chord for two, and Bennett nonchalantly said "sure" before Vargas simply put a face-up Willbender into play. The tactic would protect his Chord from the Lobotomy effect of the Specter, but all of his Rune Snags were removed. A post-combat Loxodon Hierarch meant things had spun solidly out of Scott-Vargas's control, and Bennett tried to capitalize. He turned all of his creatures sideways into the Red Zone, and Vargas traded his Willbender for Dark Confidant, dropping to 6 life. He drew his card for the turn then quickly scooped up his cards for Game 3. 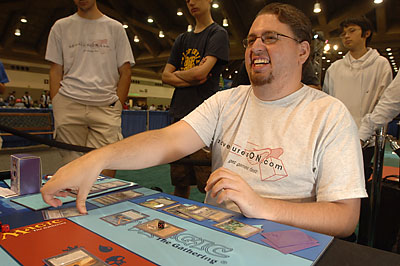 Luis Scott-Vargas chuckles his way to the top.

Bennett started the game off with a mulligan, but revealed an all-land hand at six. He sent that back and, from five, opted for a four-card hand. Things were just not looking good on Bennett's end for what looked to be shaping up to be the final game of the match. Looking at a hand of no lands, Bennett cashed in his four cards for three cards.

"You've got to have lands. Land, land, Confidant," he said, indicating what cards he wanted in his draw, now less than half the size of Luis's. With no lands in hand, Bennett sent his three card hand back to start the game at just two cards in hand.

"I don't think I've ever had an opponent mulligan to two cards," said LSV as Antonino De Rosa and Mark Herberholz rejoiced at the turn of events from the background. Bennett finally found two cards he could appreciate, and led with an Overgrown Tomb into Birds of Paradise on turn two. Vargas came out of the gates with a Wall of Roots and Serrated Arrows to ace the Birds before Mike could use it. A Hierarch came down to start putting things away for Scott-Vargas, and the match was all but over.

A Wall of Roots from Bennett earned a Spell Snare, and when LSV revealed a morph to be Brine Elemental, Bennett extended the hand.

Luis Scott-Vargas defeats Michael Bennett 3-1 and advances to the Finals.