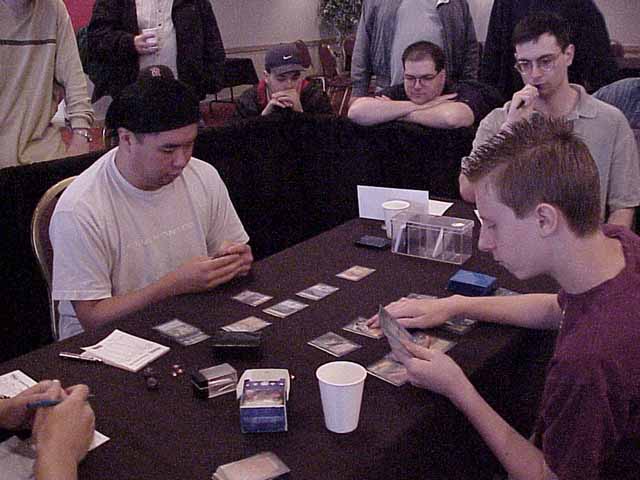 This match was a contrast in style in just about every way. Murray "The Mauler" Evans is a 13 year old who may weigh 80 pounds while soaking wet. He played a fairly aggressive Stompy-type deck which featured 4 Blastoderms in the main deck.

Gab "The Juggernaut" Tsang is a grizzled vet who weighs slightly more than 80 pounds while bone dry. He has two Top 8 Pro Tour finishes as well as three Top 8's in Canadian Nationals. He was playing a control deck which featured 12 counterspells, 3 Morphlings, and 3 Masticores, which with the aid of the Grim Monoliths can hit play very quickly.

The only thing these two competitors shared were intimidating nicknames. Given the speed of Evans' deck this promised to be a fairly quick match and indeed the entire match took less time than Gab used for a single turn in last year's Nationals Top 8. 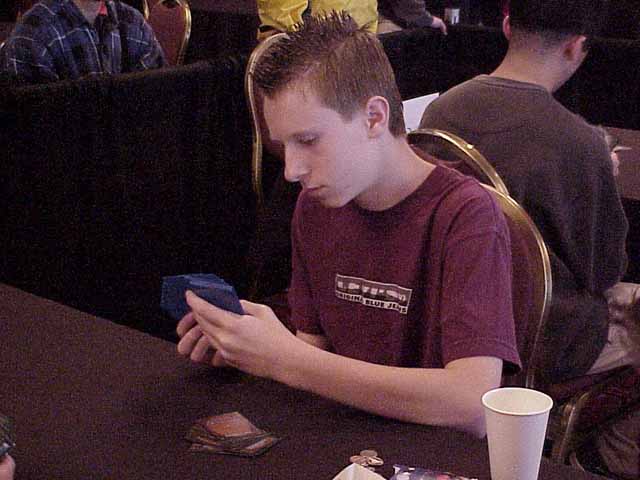 This game showed the speed of Stompy and the power of Gaea's Cradle. Evans dropped a turn 2 Troll. The turn 3 Rancor was countered but Evans dropped the Cradle and was prepared to go off next turn - Cradle-style. Turn 4 featured a Wild Dogs that stuck, an Elvish Lyrist which was countered and then a Tangle Wire hit the table. Though Gab played another land or two, the game was over as he was locked under the Tangle Wire.

Despite the Tangle Wire's role in that game Evans sent them to the sideboard along with a Jaguar in favor of some Cursed Totems, a Splinter and a couple Hidden Gibbons. I asked Evans why he took out the Wires as they seemed to be good against blue. He offered a couple explanations, but I have to admit I could not fully appreciate them. I did agree that it would be an unexpected sideboarding technique.

While game 1 greatly favored Evans, the sideboard allowed Gab to more than even up the match. Evans brought in his one Splinter, which was a threat to the Masticores. The Hidden Gibbons were very weak (which Evans agreed with). The Totems were interesting though it's hard to describe it as a bomb card and one wondered if Totems and Gibbons in the place of Tangle Wires made the deck stronger or weaker.

Gab's sideboard on the other hand featured 3 Submerges, 3 Seals of Removal, a 4th Keg and a 4th Masticore: eight cards that are all very strong in the match up versus 1 card for Evans (the Splinter). It seemed post-sideboarding that Gab had a strong edge.

By turn 2 Gab had a Monolith on the board while Evans had a Dogs and an Albino Troll. Gab's turn 3 Submerge after the Troll's echo had been paid set Murray back considerably. Evans played a Turn 3 Lyrist Gab stole with Treachery. The Lyrist traded with the Wild Dogs and during the attack phase Gab tapped one of Evans's lands with his Port so that he could Miscalculate the Troll. Next turn Evans played a River Boa which Gab also took with Treachery. The Boa traded with the Elf and then Evans played a Blastoderm hoping it would go all the way. Gab's Morphling had other ideas on that matter and while Gab took 5 more points of damage to go to 5, it would be the last damage he took that game.

Gab took a long time to decide to keep this hand rather than mulligan. Evans burst out of the blocks quickly with a turn 1 Elf and a turn 2 Cradle which allowed him to play a Troll and a Pouncing Jaguar. Gab played a Monolith. If this were the first game, Gab would have been in trouble, but Gab calmly submerged the troll on turn 3. Evans recruited a River Boa to take its place. The next turn the Troll was countered, but Evans got a Blastoderm out, leaving him with no cards in hand. Gab played a Masticore and with his remaining 2 mana shot the Boa since Evans was tapped out.

The Masticore bravely stared down the Elf, Jaguar and Blastoderm coming his way. Though Gab was tapped out and could not regenerate his Masticore he blocked the Jaguar, knowing the odds of Evans drawing a Giant Growth were very low. The odds worked out and Gab took control of the board with his Masticore, sitting back and regenerating until the Blastoderm had run out of fading counters.

It appeared Evans's path to victory was for Gab to forget to pay for his Masticore, but that seemed highly doubtful. Evans's deck decided to make it interesting as it provided a Boa and an Albino Troll on the next two turns causing some headaches for the Masticore-locked Gab. Gab had only one extra card to play with without losing the Masticore. Fortunately for him it was a Treachery, and he used it to take the Troll. Evans deck only offered land after and he quickly fell to the Masticore.

Gab looked fairly confident as he shuffled though he kept a hand with no islands. It featured two Ports, two Monoliths and a Masticore. So as long as Evans didn't draw his single Splinter, Gab could quickly take control of the board with a turn 3 Masticore.

While statistics were on Gab's side, luck was not. Turn 4 Splinter. Gab continued along the monobrown theme as he played a Keg, but that was no match for the rush of creatures on the board. Gab never played an island this game and it ended shortly after the Splinter. 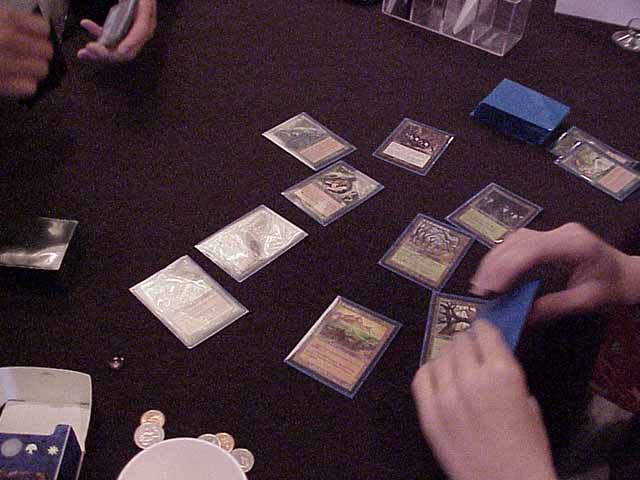 his game decided who would go to the finals and who would continue to try to compete for a spot on the team. Evans mulliganed and got off to a fairly slow start with a turn 1 Elf and a turn 2 Treetop Village. Gab played a turn 3 Masticore, and it looked all but over for Evans. Evans played a turn 4 Elf which the Masticore enjoyed as an appetizer and Gab countered a turn 5 Blastoderm. All along the Masticore was hitting Evans for 4 points a turn.

Gab was Masticore-locked, but he still had two cards in hand and good mana. He had 4 turns to draw an extra counterspell for any potential single threat. One of the two cards was a Seal of Removal which if played could have provided protection for the Masticore if needed. Gab elected not to play it and unfortunately while the math was on his side, the luck once again turned its back on Gab. Evans played his single Splinter and eliminated the Masticore's threat.

Gab had a Seal of Removal in his hand and a Port and a few islands. Evans had a bunch of Treetop Villages and eventually a Boa. Evans had some trouble figuring out how to attack with the Villages around the Port but when he was able to activate all 3 it became simple enough. Gab used a Submerge and had a few turns to draw a Morphling or a Keg to stabilize the board, but it did not happen.

Within a couple turns Murray "The Mauler" Evans had won the match and was on his way to the finals. Gab had to accept yet another year in which he came close to the prize that had eluded him in the past.