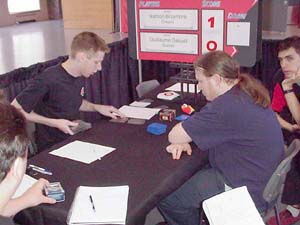 Was Nathon showing a little case of the jitters as he prepared to play against Guillaume for a chance to be the Nationals Champion? The winner of this match is also guaranteed a slot on the Canadian Nationals team—the loser must slug it out in with the other semi-finals loser to determine the third team spot.

After splitting a sleeve while shuffling, Nathon could not get his deck to add up to 60 cards while pile shuffling. After coming a short more than once he counted the cards one-by-one. When it came out to 60 he did one last pile that also came out to 60 and he was finally ready to present his deck.

Guillaume counted out the cards as he piled his opponent's deck just to be on the safe side and he came with 60 as well. Guillaume did not playtest this match-up much last night. He focused solely on his quarterfinal match, which he felt deserved all of his focus. "It is the most important match—it sends you to Worlds." This was going to be Guillaume's first actual match against an opponent not playing U/G. "I intentionally drew three times yesterday (in the Standard portion) but the day before I was 3-0 against it and I just won last round."

When asked if he knew what to expect in the match Guillaume was hesitant, "I played the mirror quite a bit during the block constructed season...I think I remember."

While Guillaume was content with his openers, Nathon went back to the well and kept the next six. His hand had one Swamp, Cabal Coffers, Mirari, Haunting Echoes, Chainer's Edict and one other spell.

Nathon made the first play of the game. He cast Chainer's Edict with an empty board so he would be able to use Skeletal Scrying on the next turn. Meanwhile, Guillaume played a fourth turn Cabal Coffers and Diabolic Tutored for another Swamp. Nathon used his Scrying and continued to not miss land drops and was able to play his Mirari on the fifth turn. Guillaume followed his opponent's example and also cast Edict with nothing in play and dug for a card at the end of Nathon's Mirari turn.

Guillaume cast another Tutor and found a Mind Sludge, which was going to devastate Nathon on his next turn. Nathon ripped Duress off the top and cast it and used Mirari. He saw Mind Sludge, Smother, 2 Mutilates and an Undead Gladiator. He took the Smother and the Sludge. Guillaume cycled his Gladiator. 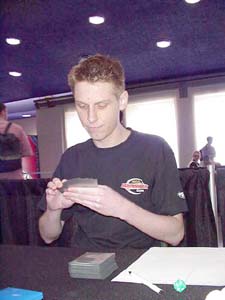 Guillaume 'cycled' away a Mutilate and returned the Gladiator. Guillaume played a second Coffers and was close to being able to rip through huge chunks of his deck during his upkeep with a Gladiator fueled by two Coffers. Nathon attempted a Haunting Echoes but Guillaume had the Skeletal Scrying and the only card he could look for was the Skeletal Scrying when it resolved—there weren't any left. Guillaume played a third Coffers and began crafting his hand with the cycling zombie.

Nathon plopped down a 6th land and cast Corrupt with a Mirari copy and he had just enough to kill the Quebecer.

Guillaume mulliganed and kept his next hand with 4 Swamps, Corrupt, and Mind Sludge. Nathon opened with Cabal Therapy and saw the whole thing—he named Diabolic Tutor and whiffed. He played a Nantuko Shade on the next turn and sacrificed it to flash back the Therapy naming Mind Sludge—he made a note that Guillaume had drawn Haunting Echoes.

On the fourth turn Nathon used Diabolic Tutor to get an Undead Gladiator. His opponent assumed he was getting Mind Sludge and cast Corrupt for four via Coffers rather than lose it. Nathon already had the Sludge and used it on the next turn to empty Guillaume's hand. Now it was Nathon's turn to start compulsing with a Gladiator.

Guillaume, glumly looking at only one card per turn, cast Diabolic Tutor for Skeletal Scrying to get in on the card drawing action. He only had 2 mana open when Nathon Duressed and he could only Scrye for one card. Guillaume's hand was Swamp and Corrupt. Nathon tutored for Nantuko Shade and two turns later it was over.

As they shuffled for the third game, Nathon could not account for his 15th Sideboard card. He went through his deck countless times and could not understand where it was. Finally—with a sheepish grin—he found it nestled inside his deck box.

Both players thought long and hard about mulliganing their opening hands. They were both faced with nearly identical hands of 6 lands and a spell and they both decided to keep. Nothing happened until the end of the sixth turn when Guillaume used Tainted Pact to find a Diabolic Tutor. He untapped and tutored for Persecute. He cast the powerful discard spell and named black. There was a roar from the crowd as Nathon slowly revealed his hand... 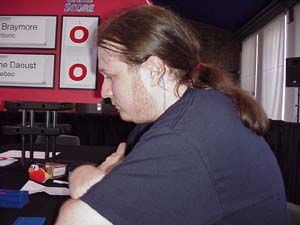 It was the most expensive Duress ever.

When Nathon drew for his turn a sly grin crept across his face. "How many cards?"

Guillaume threw his hands up in dismay, "Of course!" Nathon had just ripped the Mind Sludge and stripped away the Quebecer's hand.

His next two draws?

With all of his Edicts removed from the game, Guillaume was forced to aim a Corrupt off the top at Nathon's dome and hope to draw another one next turn. "I will have to topdeck like you at least once!"

The top of his deck yielded only Swamp.

"I am a luck sack!" exclaimed the jubilant Nathon.

Nathon advanced to compete for the title of Canadian National Champion against the winner of the Rich Hoaen-Josh Rider match.