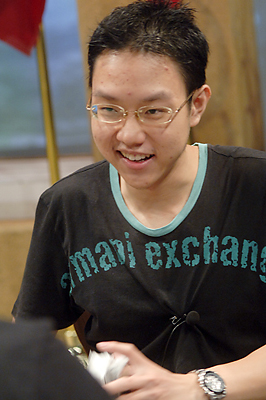 Terry 'Rakdos Augermage' Soh. Terry Soh is a veteran player, in his third Pro Tour Top 8 after his previous best of 3rd at Pro Tour–Nagoya. Soh is famous for many reasons, but particularly for his 2005 Invitational win resulting in Rakdos Augermage in Dissension.

"This is your first Top 8?" Soh asked his Austrian opponent, David Reitbauer.

"How did you go for Standard?" Terry asked.

"Ah, must be nice!" Terry exclaimed.

Reitbauer knew this match would come down to whether he could wrest control before Soh’s faster deck attacked him to death, and when he lost the die roll, he further knew he would have his work cut out for him.

Soh kept, but Reitbauer mulliganed. Arid Mesa into Mountain took Soh down to 19, which gave him a Goblin Guide. Reitbauer went down to 18, but not before revealing a Lightning Bolt hiding on top of his deck. Both chuckled at the little Goblin finding his own demise waiting.

Reitbauer did indeed have a Mountain for his first turn, and after showing a Broodmate Dragon to the Guide, he launched a torrent of lightning at the little Goblin. He had a second Bolt for the Hierarch, but no third land.

Soh played a Great Sable Stag and another Hierarch and smashed Reitbauer down to 14, then 10. Woolly Thoctar joined the fight and with Reitbauer stuck on two lands, the situation looked grim.

He laid a third and tapped them all for Sprouting Thrinax. The

lizard would not save him, however: Soh sent a Bolt at Reitbauer’s head, untapped and showed Colossal Might on the pro: Black Stag for the last 10 points.

Soh had a tough decision to make, sending back his first hand and thinking hard on the second. 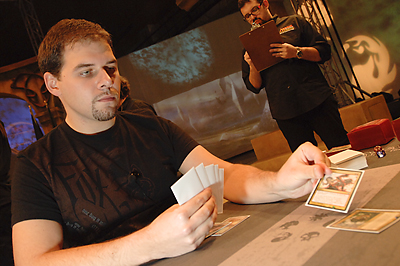 "Give me a second," he said, still pondering.

Soh eventually sent it back and kept his five, and Reitbauer led with a Savage Lands. Misty Rainforest into Forest into Noble Hierarch was a pretty excellent start for Soh, considering the double mulligan.

Reitbauer’s Lightning Bolt took care of the little exalted mana producer, and Reitbauer further developed his board with Sprouting Thrinax. Soh, missing white mana on two Forests and a Rootbound Crag, was forced to pass it back.

Garruk Wildspeaker and Beast token joined Team Reitbauer, but intending to protect Garruk’s 2 remaining loyalty from hasty attackers, he left everyone at home. Soh’s Lightning Bolt made quick work of the Wildspeaker anyway.

Soh didn’t have another land to play, but he did have a Lotus Cobra. The Cobra ate a Maelstrom Pulse and Reitbauer bashed for 6, taking Soh to 13. He ended with a Putrid Leech. Soh only had an unkicked Goblin Ruinblaster to hold back the onslaught. Reitbauer’s Bloodbraid Elf into Jund Charm to enhance the Putrid Leech was enough for Terry. He scooped and they moved to Game 3.

Soh had indeed sided them out for the second game while on the draw; would they come back in and be able to apply pressure in the third fast enough to stem the cascade of Jund two-for-ones?

The back-and-forth of mulligans continued as Reitbauer had to toss back his opening seven. Soh’s was fine, and he proved it with another turn one Noble Hierarch. When Reitbauer had only a tapped Rootbound Crag, Soh did what every Noble Hierarch dreams of doing: turn two Woolly Thoctar.

Reitbauer had Swamp and Terminate to halt the Naya monster, but Soh had another to replace it. The Austrian didn’t have another piece of removal for it, but he did have a roadblock in the form of Putrid Leech.

Soh’s next turn brought Zendikar‘s Lotus Cobra to the table, and an Arid Mesa powered up into a Bloodbraid Elf cascading into Colossal Might. The pump spell on the Woolly Thoctar meant Putrid Leech could no longer be a reasonable block, and Reitbauer took the Beast damage on the chin, going down to 10 life. That 10 became 9 when the Austrian cracked his Verdant Catacombs for a Forest.

Reitbauer had a Bloodbraid of his own, which found a Maelstrom Pulse sitting on top of his deck. That made quick work of the Thoctar, and he passed it back to Soh. Soh had his own piece of removal, this time Celestial Purge for the Putrid Leech, and a second Noble Hierarch gave him a very exalted 5/4 Bloodbraid Elf. Soh swung in, and Reitbauer dropped to a mere 4 life.

Still, the Austrian looked to stabilize, and called out Master of the Wild Hunt. If left unopposed, it could essentially shut down Soh’s entire offense. Soh didn’t have any removal for the Master, but he had another Purge for Reitbauer’s sole remaining expendable creature, Bloodbraid Elf. That meant the Master of the Wild Hunt had to chump the ever-attacking 5/4 Elf.

Reitbauer had a good one waiting with Garruk Wildspeaker, though, untapping lands and laying another Bloodbraid Elf. This one cascaded into Sprouting Thrinax, and the defenses had been reestablished.

Or so it seemed. Soh cast his own second Bloodbraid Elf. When he cascaded into hasty Goblin Ruinblaster, he rumbled across with four 2+ power attackers to Reitbauer’s 4 life and 2 blockers, and stole the game.

"I thought I had you," Reitbauer said.

"Just want you to know, all of the games will go like that," Soh joked.

Reitbauer nodded. "Well, I had a Bituminous Blast into a Bloodbraid Elf into a Lightning Bolt in the Quarterfinals, so ...." 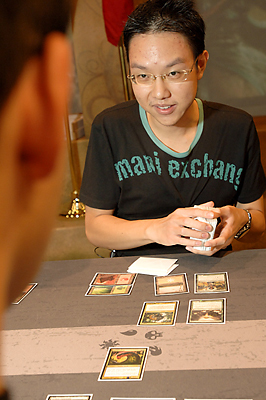 Serious competition is no reason for serious faces. Reitbauer began with another mulligan, the fifth so far this match. Soh had a Forest but no turn-one Hierarch, which meant that Reitbauer’s Putrid Leech on turn two was a fearsome presence.

Soh laid a Rootbound Crag and a Lotus Cobra, looking to accelerate quickly out of the early game. Reitbauer would have none of that, sending Lightning Bolt at the Snake and smashing in for 4, taking them to 17-16 his lead. History repeated itself with another Cobra and another Bolt, and Soh was down to 12.

When Woolly Thoctar met a similar fate at the hands of Terminate and the Leech was joined by a Sprouting Thrinax, Soh dropped to 5. The Malaysian player finally found a blocker that might stick with Great Sable Stag, but Reitbauer quickly untapped and showed the Burst Lightning to take the match to its final game.

Both kept in an astonishing change of pace. Soh had turn-two Lotus Cobra, but Burst Lightning burst his dreams of making a quick monster. Soh’s follow-up was a Goblin Guide, taking Reitbauer down to 18 and revealing a Master of the Wild Hunt.

Soh smashed in again with the Guide, dropping Reitbauer to 16, but again avoided a land, showing Bloodbraid Elf on top of the Austrian’s deck. Unfortunately, the Malaysian had no third land, and he passed it back to Reitbauer.

Reitbauer cracked a fetch, down to 15, and played a Bloodbraid Elf. The Elf found a Pulse for the Goblin Guide, and Soh returned the favor with a Purge on the Elf. That was the end of favors on Soh’s side, however, as he missed his land drop again.

The Austrian had the aforementioned Master of the Wild Hunt, and an additional land drop that turn meant he was able to grow it to 3/3 with Oran-Rief, the Vastwood. Soh still had no land and had to pass.

Next turn, Reitbauer unloaded with two Putrid Leeches in addition to the Master of the Wild Hunt, and grew them all with the Oran-Rief. Soh again had no land but did have a Lotus Cobra.

The Cobra couldn’t stop the beats, though, and when Reitbauer had Terminate waiting, the horde of green creatures smashed Soh out of the Top 8 and Reitbauer into the Finals. 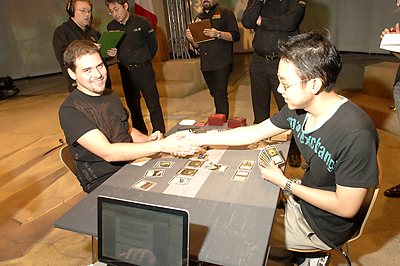 David Reitbauer defeats Terry Soh 3–2 and advances to the Semifinals! 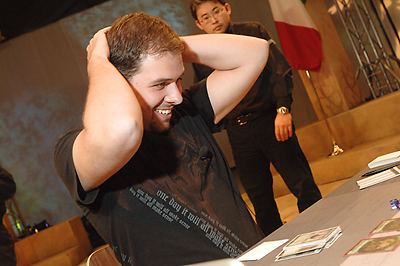