One of these two fine fellows wanted to be the big cheese in Wisconsin, and they met at the semi-finals in order to determine who could curry the most dairy products. Reeves brought farmer Psychatog with his milkmaids Nightscape Familiar, while Chapin just brought the whole farm with Squirrels, Birds, Hounds, Elephants and Bears. Neil won the die roll and chose to play first. 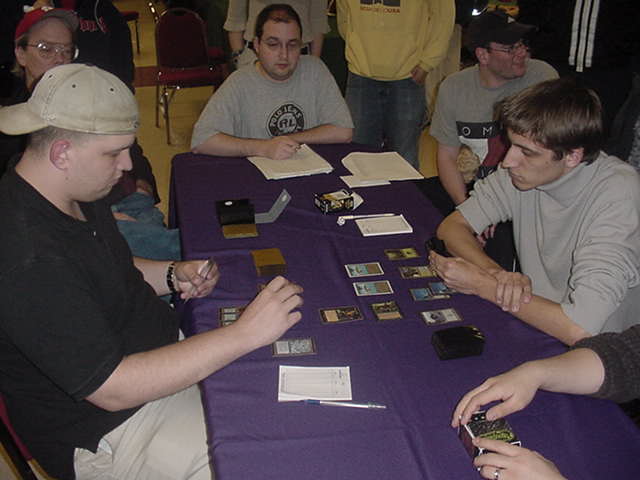 Each player accelerated their mana situations early on, with Chapin's first turn Bird of Paradise being met by Nightscape Familiar (or as Neil put it, "my bird!"). Pat raised the stakes with a Wild Mongrel, which ran repeatedly into the blocking regenerator. Perhaps doggy wanted a bone, but Reeves wouldn't let him. Things picked up on the 6th turn, at which point Neil attempted to cast a Probe without kicker, to which Chapin responded to with a Fact or Fiction, which was Counterspelled quickly.

On lucky turn number nine, Neil decided to play the better Wild Mongrel, Psychatog. Who knew that Pat's answer would dominate the entire rest of the game? Content to let the atog resolve, Chapin played a Compulsion, which allowed him to rapidly cycle through his deck, all the while dropping Basking Rootwallas and Arrogant Wurms for free.

NeilR made a valiant attempt to attack Chapin's hand size with a kicked Probe, since he couldn't attack Chapin's life total any longer. Chapin Countered, which was in turn Countered, which was in turn met with Circular Logic via Compulsion. Everything was allowed to resolve except the original Probe and Counterspell, at which point Neil played his own Circular Logic via his Psychatog, which was met with Chapin's 2nd Counterspell. The net result? The graveyards were filled with lots and lots of blue instants.

Neil (to Pat): You're a chump.
Pat: I've never been called a chump before.
Neil: Well, you are.
Pat: (Plays Squirrel Nest the next turn) I guess a chump would play cards like this.
Neil: This board position could get worse, but not much. 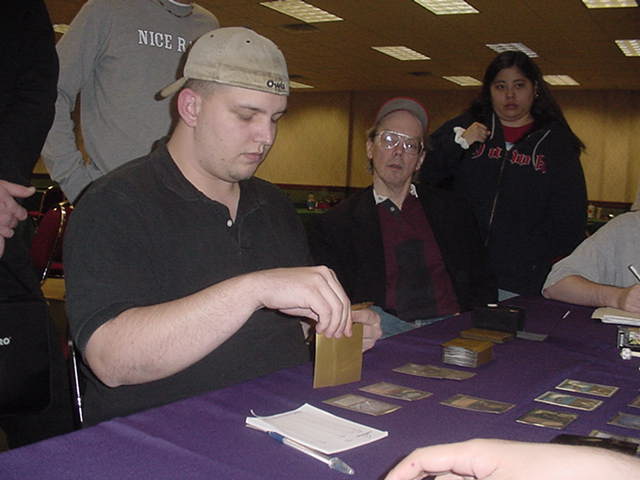 As a last ditch effort to reign in Chapin's Compulsion and creature horde, Neil cast an Upheaval, floating 4 mana. Once again Circular Logic countered targeted a blue sorcery, but this time Neil used three of his mana (remember, he still had the Nightscape Familiar in play) to Fact or Fiction in response-which netted him a 2nd Psychatog and a Repulse. With Chapin having a sole land left untapped, Neil used a Force Spike, hoping Pat wouldn't notice that the aforementioned land since it was enchanted with Squirrel Nest. Chapin did, and proceeded to cast two more Squirrel Nests over the next two turns.

Reeves tried to keep up with the squirrel production by attacking with his Psychatogs. Meanwhile Chapin desperately searched for an Opposition to lock up the game, but couldn't find one even after two Fact or Fictions and dozens of activations of Compulsion. Finally, on the 17th turn of the game, Pat drew the enchantment he was looking for and Neil conceded on the spot.

A sigh of relief went through the crowd, as the first game lasted over an hour. Everyone confirmed that the semis were best two out of three, and both players sideboarded for the second game.

Game two went much more in Neil's favor initially, with the Blue/Black/Red mage dropping an early Psychatog on the fourth turn (to a cry, of course, of "Cookie!"). He countered a Nest from the Blue/Green wizard, and proceeded to run his monster wily-nily all over Chapin's board. Neil's spirits dampened somewhat on the sixth turn, when Chapin tapped out for an Upheaval, still having not played a land for the turn (it was powered off a Birds of Paradise). 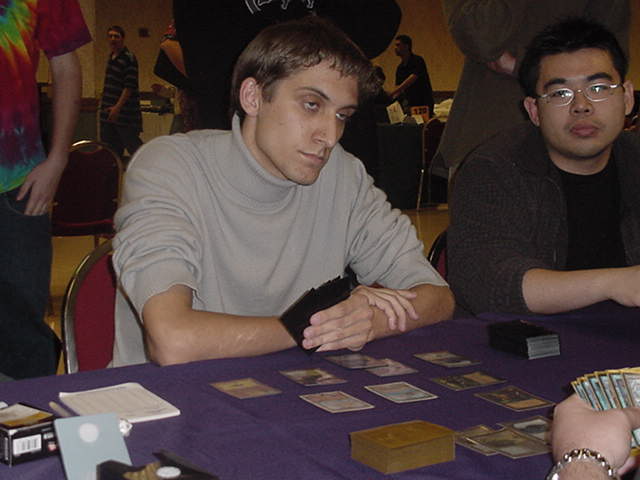 Although the Upheaval was met with a Circular Logic, Chapin slapped down a Bearscape the following turn, his graveyard filled with cards. The Psychatog doubled (a second one joined the board), and together they chipped away at the bear count, one of them losing its life for the cause. Slowly, very very very slowly, Neil chipped away at Pat's life total, one point at a time.

Pat: I feel like I'm dying to poison counters!

No matter what Neil did, there were bears a plenty around. He summoned a couple of Familiars to the board, but they were held off handily by the opposing 2/2's. His face brightened considerably when he drew an Engineered Plague. Pat countered it, but then Neil countered that, which was in turn countered back by Pat, which was countered back my Neil, which was countered a 3rd time by Pat, and finally a 3rd time by Neil, allowing the Engineered Plague to resolve. This keyed off probably the funniest exchange of dialogue I've ever heard at a Magic table.

All this beary goodness was for naught, as Pat drew multiple Fact or Fictions and Squirrel Nests while Neil drew land, land and more land. Inevitably, with three Squirrel Nests and massive card advantage, Pat pulled out an Opposition and sealed the match win.