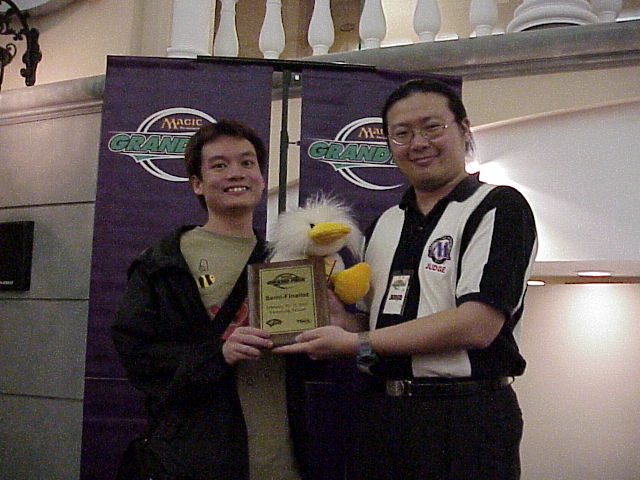 These players last locked horns in the Top 8 of Grand Prix Singapore. Kuo was the victor then, and Wong was hungry for revenge. Truth be told, both players were hungry for sleep.

Wong set up his defenses fast with a pair of Samite Pilgrims. His first heavy hitter was a Questing Phelddagrif. Kuo played a Thornscape Apprentice and had Quirion Elves to power its tapping ability.

Kuo then dropped the bomb: Planeswalker's Scorn. He dispatched both Pilgrims before you could say "Jack Robinson". Wong cast Fact or Fiction, revealing three land, a Hunting Drake and a Vodalian Serpent. Kuo split the piles into creatures and lands. Rather than let the Scorn tear him further apart, Wong took the lands.

Showing the skills that propelled him into the Top Eight, Wong topdecked Treva, the Renewer. Phelddagrif hit for four. The Apprentice was otherwise occupied. He TD'd again, this time an Exclude for Kuo's Viashino Grappler. That, in turn, gave him a second Fact or Fiction.

Here, Wong misplayed slightly. He took a pile of large casting costs, and used Sawtooth Loon to manipulate his hand. That would have been all well and good if he had not forgotten that the Loon would return a creature to his hand. In his shock over his mistake, Wong picked up the Loon instead of Galina's Knight. This meant that Kuo's Scorn had a 50% chance of delivering -4/-4. It hit twice, killing the hippo and the Merfolk.

Wong tried to recover, using the Loon to fetch powerful defenders like Crimson Acolyte and Samite Pilgrim. Kuo's Sulam Djinn had him under a clock. Wong picked up a Minor Procedural Error Warning when he tried to get Enchantments with his Skyship Weatherlight. When he realized that wasn't what the card did, he was pretty sure he had lost. Kuo put him out of his misery a turn later.

Wong began game two strongly, with Crimson Acolyte. Kuo used Quirion Elves to cast a turn-three Battery and begin beating. Wong was so excited at the prospect of a turn-four hippo that he gave in immediately. Kuo tipped the Terminate in his hand. Had Wong waited, Questing Phelddagrif could have taken the whole game. As it was, it went to the graveyard. Kuo added a Verduran Emissary to his team.

Wong tapped out of white again to kick up a Prison Barricade. Kuo removed it after blocking with Magma Burst, kicking it to hit Wong for three. Wong cast an unspectacular Fact or Fiction that served only to replace itself. He fell to six.

Next turn he Hobbled Kuo's Elephant and put a Sleeping Potion on the Emissary. Kuo played Sulam Djinn. Wong took four damage from it, but the game was swinging in his favor. His second Fact or Fiction delivered the goods, giving him a Wings of Hope that let his Snidd rule the table. It also had a Samite Pilgrim, to prevent any untoward happenings. He even killed Kuo's Djinn. Kuo failed to notice the active Tidal Visionary on Wong's side of the board.

Kuo Harrowed at end of turn. He untapped and flipped his top card into his hand. The crowd gasped. It was the Magma Burst for the win.