Although somewhat in the shadow of the Jon vs. Kai match on the other table, this was still a Semifinals match of a Pro Tour. Both players were content with their opening hands and it was Herzog to play first. 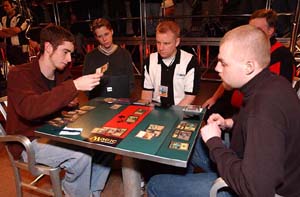 Stern was the first to summon a creature though—Festering Goblin. Herzog made a Leery Fogbeast and must've been happy to see Stern's third turn go by without him playing a morph. Herzog made a Symbiotic Elf and a Barkhide Mauler on his next turns. In the meanwhile Stern took it to the air with a Screeching Buzzard and he still had a Dive Bomber and Aphetto Vulture in his hand. His attempt to stop Herzog's beatings a bit, a Daunting Defender, looked rather puny compared to the Kamahl, Fist of Krosa Herzog summoned on his turn. The Buzzard came in once again and Stern made a True Believer and Dive Bomber. Herzog charged with his Symbiotic Elf and Mauler. True Believer threw itself in front of the Symbiotic Elf. One Overrun later and the True Believer was dead—and Stern was on 9 life.

Stern's Buzzard came in once more, bringing the Norwegian down to 13. The Barkhide Mauler recieved a Sandskin in an attempt by Stern to stop Kamahl's madness. That still didn't keep Herzog from attacking, just with the Symbiotic Elf this time. The Goblin's –1/-1 was aimed at Herzog's Fogbeast instead of the Elf to keep the Norwegian from having too many creatures available for his Kamahl. Herzog had an Elven Riders to put on more pressure though. Stern finally found his second Swamp so he could cast his Aphetto Vulture. Herzog activated his Kamahl on his turn, and along with a Wirewood Pride it was certain that Stern would receive lethal damage. 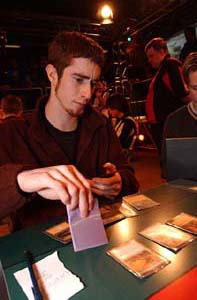 Again the first play of the game was a Festering Goblin by Stern, but it didn't survive its first attack due to a Vitality Charm. Stern started making his air force again with his Gustcloak Harrier and Screeching Buzzard. Herzog had to play a cycle land on his third turn, and then cycled a Krosan Tusker on his fourth turn, leaving him. Herzog's fifth turn Spitting Gourna was targeted by Oblation and Stern served for 6 – the two fliers and a morph he had summoned last turn. The Norwegian cycles a Dirge of the Dead and plays out a Screeching Buzzard of his own. Stern's forces hit the Red Zone again and the two Buzzards traded. Aven Soulgazer made its first appearance and that supplied Stern with enough flying power to seal this game.

And for the third time in a row, Uncle Fester hit the board on Stern's first turn. Wirewood Herald was Herzog's answer – and a good one at it. A Wellwisher joined it along with an Everglade Courier. Stern showed his mana problems - missing his fourth land drop and he only had Swamps in play so far. Barkhide Mauler was up next for the Norwegian while Stern could only muster a morph. Elvish Warrior joined Herzog's army and the Herald and Mauler went unblocked. The Courier pumped the Herald, bringing Stern down to 12. Finally finding his plains, Stern summoned a Dive Bomber. Still Herzog's beaters charged. Stern's morph blocked the Herald and Uncle Fester blocked the Mauler. The Festering Goblin tried to take the Everglade Courier with it to the grave but the elf pumped itself Wirewood Herald did die though and it fetched another Elvish Warrior. A Gustcloak Skirmisher on Stern's side didn't quite stop the beats. Stern just blocked the Mauler and the Courier along with a Wirewood Pride on one of the two Elvish Warriors finished off Stern. 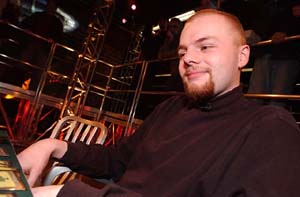 Stern's hand for this game was mediocre at best, containing 5 Plains, a Swamp and a Dive Bomber, but Herzog had to trade in his hand. His next hand was good enough apparently, as he played out his Elvish Warrior on his second turn. Stern summons a Gustcloak Harrier, the Dive Bomber and morphs his Whipcorder on his 3rd through 5th turn. Elven Riders made its first appearance on Herzog's fifth turn, after he added a Disciple of Malice to his side of the board. Stern morphed his Haunted Cadaver and tapped down Herzog's Elven Riders. While the beatings in the air still went unstopped, Herzog put on the pressure by summoning Kamahl, Fist of Krosa. Stern slumped in his chair a bit and summoned a Festering Goblin. With life totals at 10 and 12 respectively it was time for some math – in the end Stern's two fliers hit the Red Zone to bring the Norwegian down to 6. Herzog did have a seventh land, screwing up Stern's math ad Herzog's Kamahl was tapped by the Whipcorder so he turned one of his lands into a 1/1 creature and Overrunned (Overran?), taking the game and the slot in the finals, where he will have to face one of the two best players Magic has ever seen.